The global anti-seize compounds market is estimated to garner a sizeable revenue and grow at a CAGR of ~4% over the forecast period, i.e., 2022 – 2030. The growth of the market can be attributed largely to the growing concerns associated with the dispersal of heavy metals such as nickel, zinc and lead into the environment. Along with these, properties of anti-seize compounds include extended life, reduced downtime, ease of assembly and disassembly, and protection in extreme temperatures, providing them an edge over similar materials. This is a crucial factor projected to augment the demand for these compounds in the forthcoming years. Furthermore, increasing utilization of copper-grade and nickel-grade anti-seize compounds in a wide range of end-user industries, especially petrochemicals and oil & gas sectors, is expected to offer ample growth opportunities to the market in the near future. 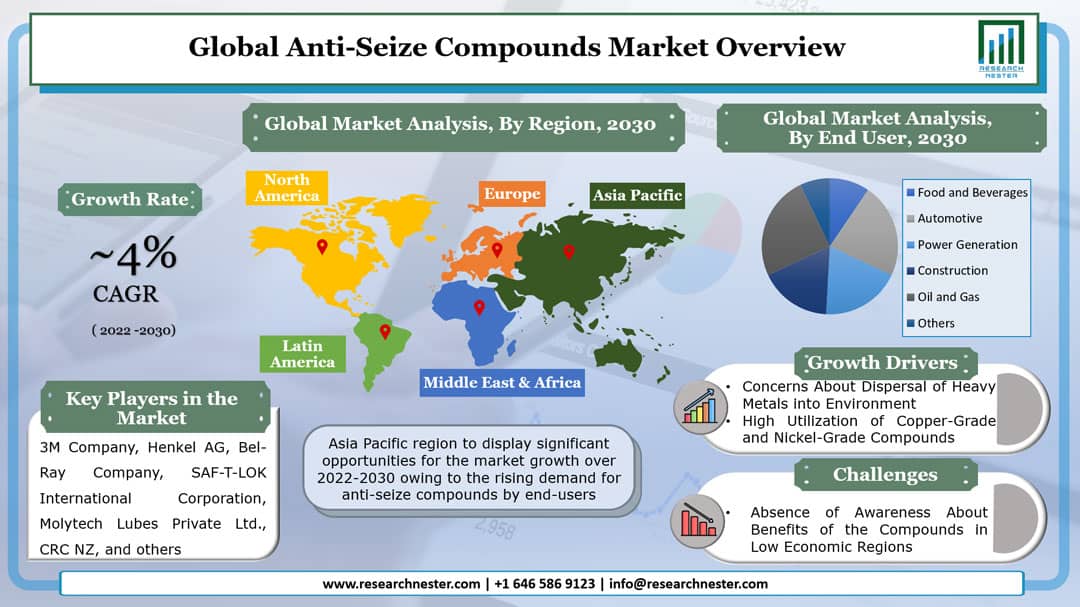 The market is segmented by type into copper and graphite based, aluminum, copper and graphite based, nickel and graphite based, molybdenum based, non-metallic, and others, out of which, the copper-and-graphite-based segment is anticipated to hold the largest share in the global anti-seize compounds market. This can be accounted to the ability of this type of anti-seize compounds to be operated at very high temperatures of up to 1,800-degree Fahrenheit, and their high usage in petroleum industry. Apart from this, the non-metallic segment is assessed to witness the highest growth over the forecast period as metallic counterparts of these compounds can result in chronic and blood-borne disorders after prolonged exposure. Additionally, on the basis of end user, the oil and gas segment is evaluated to occupy the most significant share during the forecast period ascribing to the largescale use of copper grade and nickel grade anti-seize compounds in this industry, and rising investments regarding different activities in the oil and gas sector.

On the basis of geographical analysis, the global anti-seize compounds market is segmented into five major regions including North America, Europe, Asia Pacific, Latin America and the Middle East & Africa region. The market in the Asia Pacific is estimated to witness noteworthy growth over the forecast period on the back of the increasing demand for anti-seize compounds in end-user verticals in the region, namely transportation, automotive, mining and construction. In addition, abundance of raw materials and availability of cheap labor are also predicted to drive the region’s market growth in the upcoming years. Moreover, the market in North America is projected to acquire the largest share during the forecast period ascribing to the high production of automobiles, and growing investment of government in constructure and infrastructure projects in the region. According to the Bureau of Transportation Statistics, a total of 11,297 vehicles were produced in the United States in 2018. The production decreased in the year 2019, accounting for 10,893 vehicles. 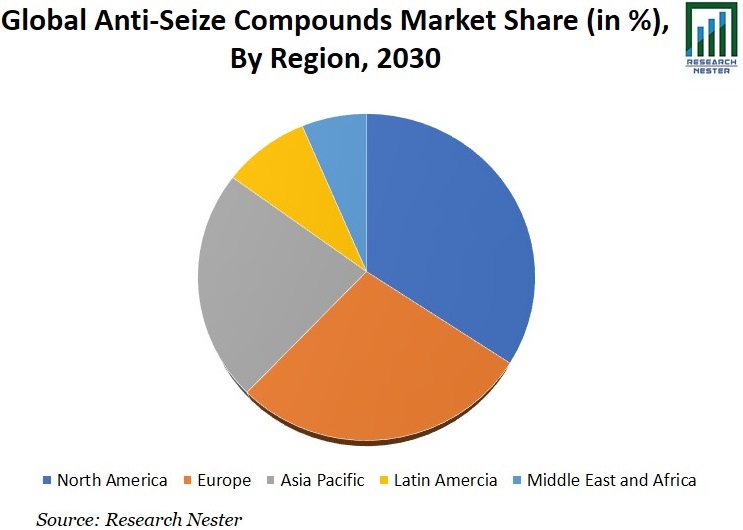 The global anti-seize compounds market is further classified on the basis of region as follows:

Our in-depth analysis of the global anti-seize compounds market includes the following segments:

What are the major factors driving the growth of the anti-seize compounds market?

The major factors driving market growth are growing concerns associated with the dispersal of heavy metals into environment and increasing utilization of copper-grade and nickel-grade compounds.

What would be the CAGR of anti-seize compounds market over the forecast period?

What are the challenges affecting the anti-seize compounds market growth?

Low awareness about benefits of the compounds in underdeveloped nations is estimated to hamper the market growth.

Which region will provide more business opportunities for growth of anti-seize compounds market in future?

Asia Pacific will provide more business opportunities for market growth owing to the increasing demand for anti-seize compounds in end-user verticals in the region, namely transportation, automotive, mining and construction.

Who are the major players dominating the anti-seize compounds market?

The major players in the market are 3M Company, Henkel AG, Bel-Ray Company, SAF-T-LOK International Corporation, and others.

What are the segments in the anti-seize compounds market?

Which segment captures the largest market size in the end user segment in the anti-seize compounds market?

The oil and gas segment is anticipated to hold largest market size and is estimated to grow at a notable CAGR over the forecast period and display significant growth opportunities.