The global graphite market is estimated to garner significant revenue by the end of 2031 by growing at a CAGR of ~9% over the forecast period, i.e., 2022 – 2031. Further, the market generated modest revenue in the year 2021. The growing demand for graphite in lithium-ion batteries and combustion engines is a major factor expected to drive the global graphite market over the forecast period. Moreover, the rising demand for electric vehicles and phones, which largely depends on rechargeable batteries, is further expected to propel market growth. In addition to batteries used in mobile phones and electric vehicles, graphite is also a key raw material in these batteries. In tandem with the growth in lithium-ion battery demand, graphite demand is also expected to increase. As a result of increased demand for electric vehicles, sales doubled in 2021, reaching a new record of 6 million. The market share of electric cars in 2021 was nearly 10%, four times what it was in 2019. Electric car sales have continued to rise in 2022, with 2 million sold in the beginning, up 70% from 2021. 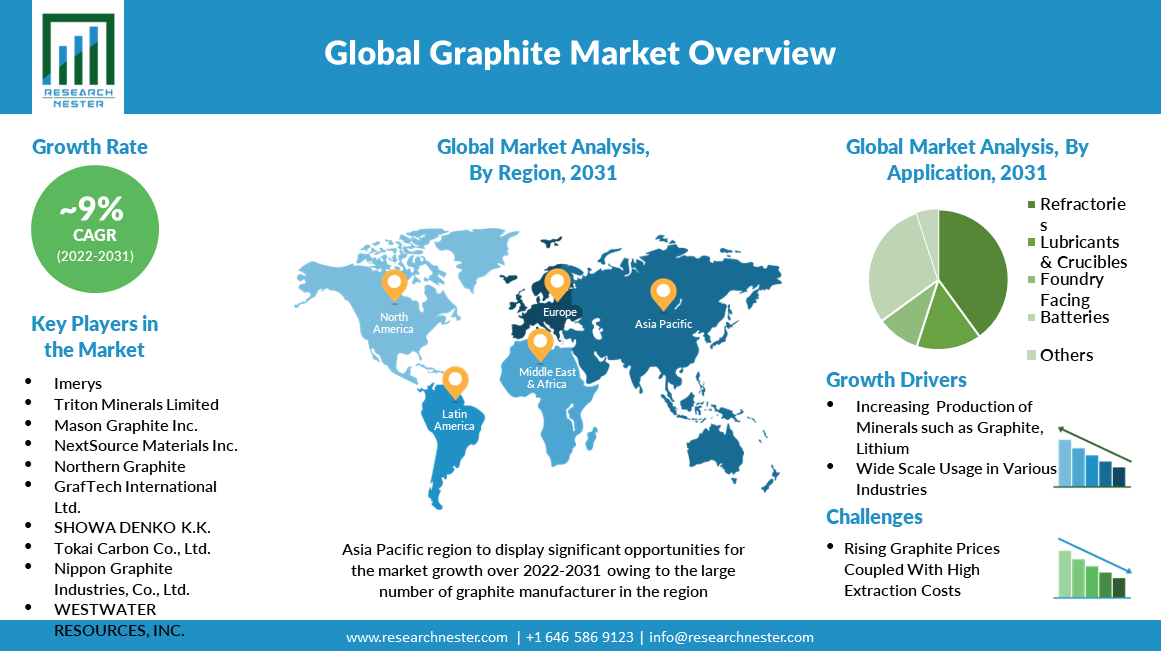 The properties of graphite combine the best of metallic and non-metallic materials, making it one of the world's most versatile manufacturing materials in numerous industrial products. Since graphite is used for numerous applications, including electrodes and refractories, its demand has increased significantly over time. In addition to that, technological advancements in steel production using electric arc furnaces (EAF), and emergence of battery-powered automobiles are market trends anticipated to contribute significantly to the global graphite market size over the forecast period. Furthermore, expansion of mining industry is expected to drive market growth. According to India Brand Equity Foundation, the number of reporting mines in India was estimated at 1,229 as of 2021, of which 545 mined metallic minerals and 684 mined non-metallic minerals.

Graphite is widely used in aerospace applications, as well as in the production of lightweight composite parts used in aircraft. In comparison to traditional aerospace materials, such as metals and plastics, graphite has high compressive strength capability. In addition to that, the growth of aerospace industry is expected to propel the demand for graphite over the forecast period.

The global graphite market is segmented and analyzed for demand and supply by application into refractories, lubricants & crucibles, foundry facing, batteries, and others. Out of which, the refractories segment is anticipated to capture the largest market size in the global graphite market. The rising application of graphite as a refractory material is expected to grow during the forecast period owing to its properties, such as, heat resistance, stability and high thermal properties. Furthermore, the growth of this segment can also be attributed to the rapid industrialization and the increased use of graphite in the iron and steel industries. In a study it was observed that in a steelmaking process the tip of the electrode is heated up to 3,000 degrees Celsius. Electrodes are made of graphite since only graphite is capable of handling such intensive heat. In addition to that, nearly 4 kilograms (8.8 pounds) of graphite electrodes are used to make a ton of steel.

Regionally, the global graphite market is studied into five major regions including North America, Europe, Asia Pacific, Latin America and Middle East & Africa region. Amongst these markets, the market in Asia Pacific is projected to hold the largest market share by the end of 2031 on the back of rapid industrialization in countries such as China, India, and Japan, and increasing demand for graphite from steel manufacturers is expected to drive the market in region. In addition to that, India and China are among the world's largest crude steel producers. According to the World Steel Association data for 2018 and 2019, India ranked second in the production of crude steel after China. India’s crude steel production in 2019 was at 119.2 MT, higher than 109.3 MT in 2018, whereas China's crude steel production was 996.3 MT in 2019. Furthermore, China is the world's largest consumer and producer of graphite electrodes. Based on US Geological Survey data, China produced 820,000 tons of graphite in 2021, accounting for 79 percent of the world's graphite production. Around 24% of the graphite produced in China was amorphous, and about 76% was flake graphite. 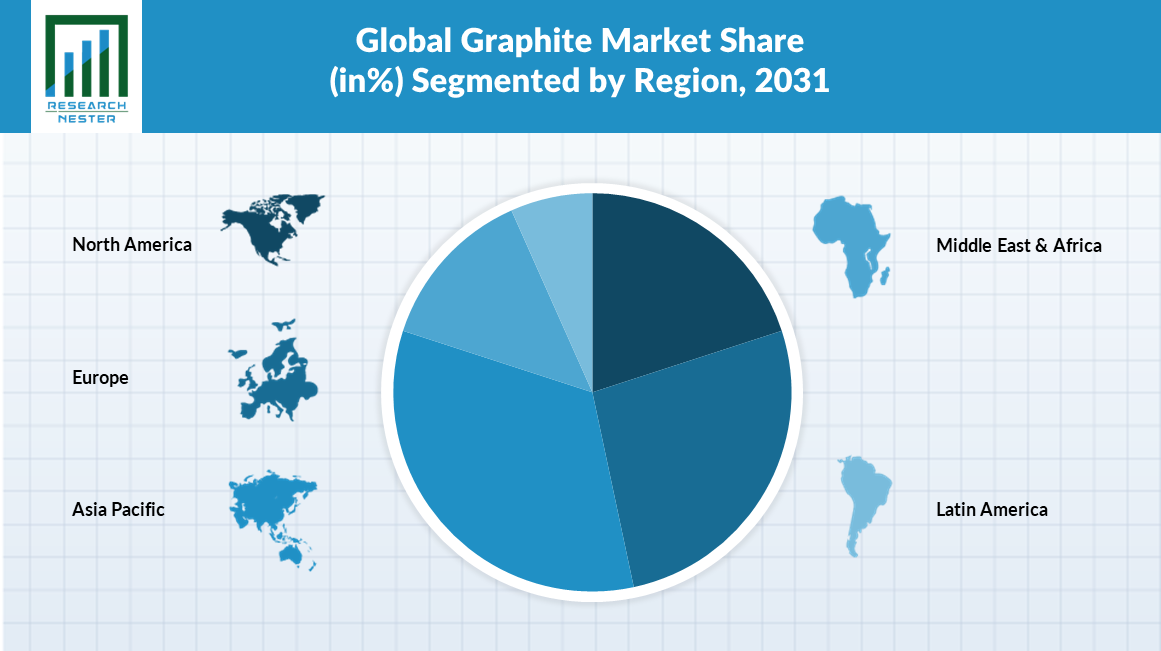 The global graphite market is further classified on the basis of region as follows:

Our in-depth analysis of the global graphite market includes the following segments:

What are the major factors driving the growth of the graphite market?

Globally increasing production and exports of graphite along with the production of crude steel are the major factors driving the growth of the graphite market.

What would be the CAGR of graphite market over the forecast period?

What are the challenges affecting the graphite market growth?

Globally increasing export duty and strict regulations for graphite mining processes by the government are the challenges expected to hamper market growth.

Which region will provide more business opportunities for growth of graphite market in future?

Who are the major players dominating the graphite market?

What are the segments in the graphite market?

The market is segmented by product type, application, end user, and by region.

Which segment captures the largest market size in application segment in the graphite market?

The refractories segment is anticipated to garner the largest market size by the end of 2031 and display significant growth opportunities.