The global submarine cable system market is estimated to grow at a CAGR of ~12% over the forecast period, i.e., 2022 – 2030. The growth of the market can be attributed to the growing requirement for offshore communication system, penetration of internet and mobile networks in remote areas, and rising demand for power supply. The submarine cable systems are highly demanded in island countries for power connectivity, which is estimated to boost the market growth. Moreover, the requirement for higher bandwidth, backed by the growing usage of the internet, and advancement in network connectivity with the adoption of 7G technology, are estimated to boost the demand for submarine cable system. According to the data by the World Bank, 1.134 billion people worldwide have a fixed broadband connection, as of 2019, which is approximately 15.6 per 100 individuals. Additionally, the emergence of large number of offshore wind farms and offshore oil wells is estimated to boost the market growth. 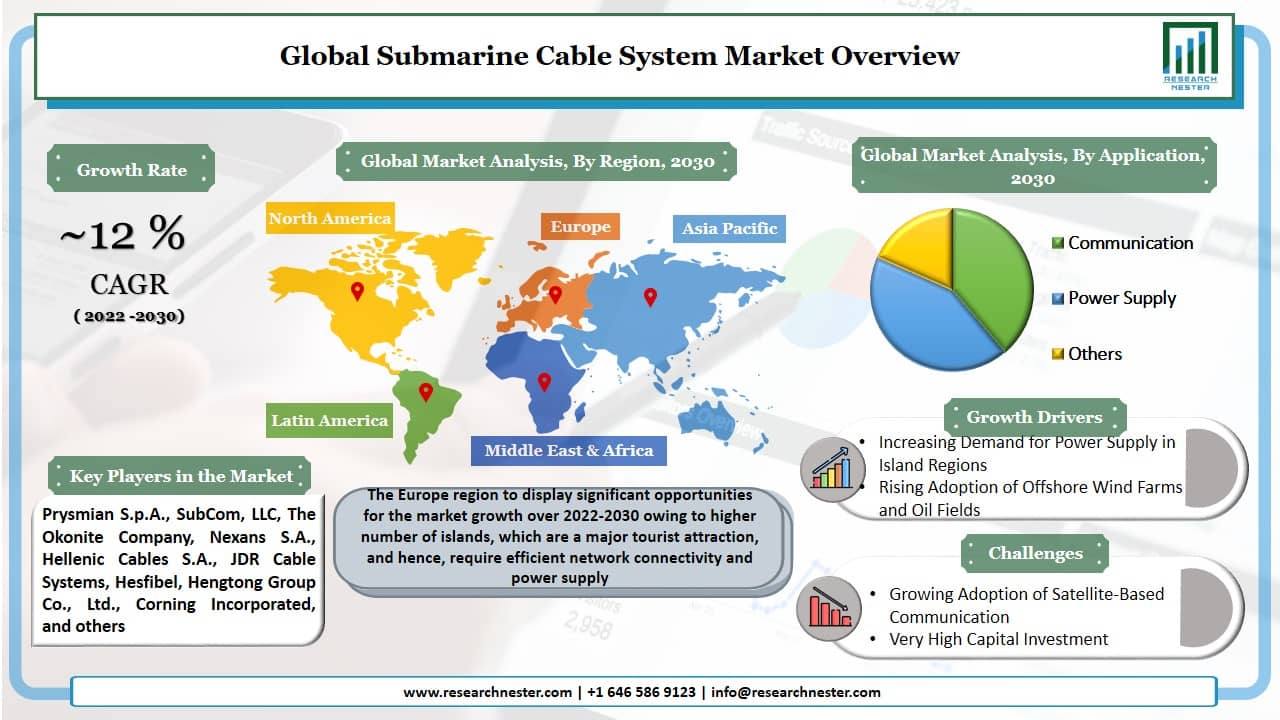 The market is segmented by application into communication, power supply, and others, out of which, the power supply segment is anticipated to hold the largest share in the global submarine cable system market over the forecast period on account of the need for electricity for sustenance of any civilization in the modern times. The increasing habitation in the island areas, along with development of tourist attractions in such places, is estimated to generate the demand for power supply, which is estimated to boost the market growth.CLICK TO DOWNLOAD SAMPLE REPORT

On the basis of geographical analysis, the global submarine cable system market is segmented into five major regions including North America, Europe, Asia Pacific, Latin America and Middle East & Africa region. The market in Europe region is estimated to witness noteworthy growth over the forecast period on the back of the growing requirement of establishing connectivity across the region in the Atlantic Ocean, including Norway, UK, and others. Various important tourist spots in the Europe, such as, the Dalmatian Islands, Paros, Milos, Canary Islands, and others, are islands. This is estimated to fuel the market growth in the region. Moreover, presence of various offshore wind energy farms is also estimated to boost the market growth. The market in the North America region is anticipated to gain significant market share throughout the forecast period owing to the presence of large number of offshore oil reserves, along with the growing requirement of internet across the region. 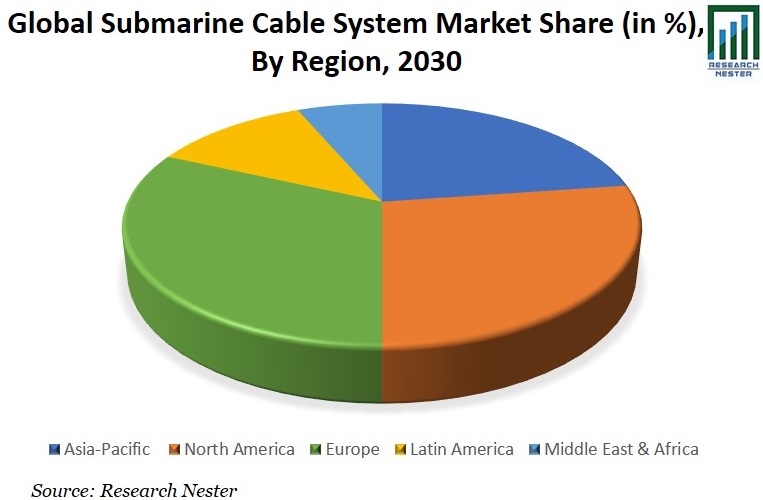 The global submarine cable system market is further classified on the basis of region as follows:

What are the major factors driving the growth of the submarine cable system market?

The growing adoption of offshore oil fields, and wind energy generating farms is estimated to boost the market growth.

What would be the CAGR of submarine cable system market over the forecast period?

What are the challenges affecting the submarine cable system market growth?

High capital investment, and growing adoption of satellite-based communication are estimated to hamper the market growth.

Which region will provide more business opportunities for growth of submarine cable system market in future?

The market in the Europe region will provide growth opportunities on the back of higher number of islands, which are a major tourist attraction, and hence, require efficient network connectivity and power supply.

Who are the major players dominating the submarine cable system market?

What are the segments in the submarine cable system market?

The market is segmented by voltage, application, end-user, and by region.

Which segment captures the largest market size in end-user segment in the submarine cable system market?

E-Notary Software Market Segmentation by Type (Cloud Based, On premise, and Others); by Application (Electronic Signature, Digital Certificate, and Others); and by End-User (Large Enterprises, SMEs, and Others) – Global Demand Analysis & Opportunity Outlook 2030