The global satellite-based GNSS augmentation system market is estimated to grow at a notable CAGR over the forecast period, i.e., 2022 – 2031. GNSS or global navigation satellite systems provide positioning, navigation, and timing services across the globe or on the basis of regions. The growth of the market can be attributed to the constant technological breakthroughs and advancement in technologies, such as GPS systems. Moreover, the growing investment by government as well as private authorities, for the development of advanced satellite-based services, is further estimated to boost the market growth. According to the data by the United Nations Office for Outer Space Affairs (UNOOSA), the International Committee on Global Navigation Systems (ICG) is working towards establishing interoperability among the global systems, which will allow a GNSS user to receive signals from multiple systems of satellites for navigating and positioning. Along with this, the increasing safety concerns regarding civil aviation are also anticipated to fuel the market growth. 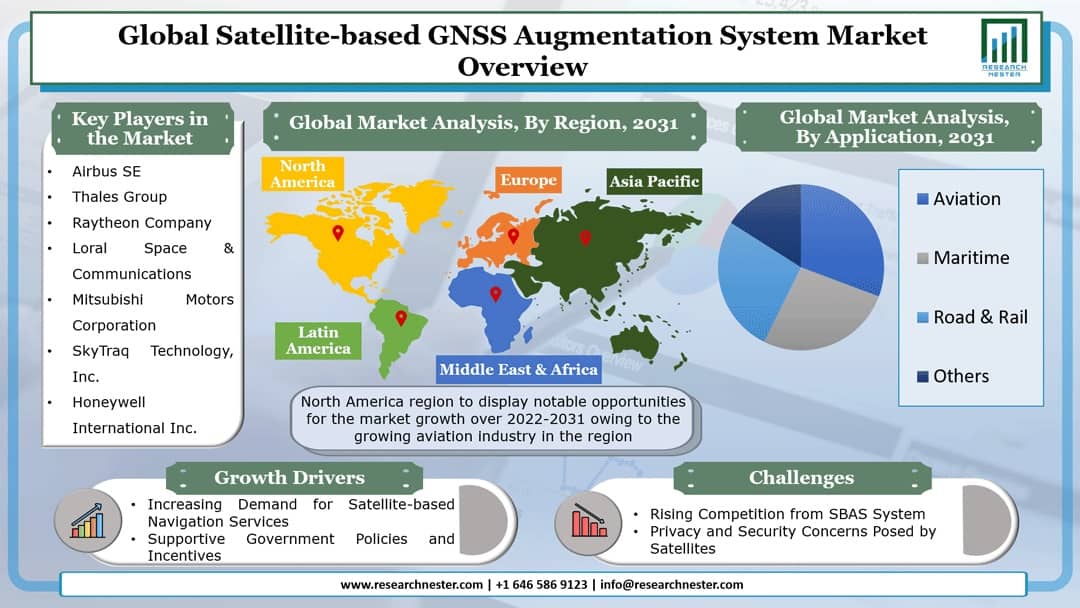 The market is segmented by application into aviation, maritime, road & rail, and others, out of which, the aviation segment is anticipated to hold the largest share in the global satellite-based GNSS augmentation system market over the forecast period on account of application of GNSS for navigation amongst the aircrafts, combined with the high efficiency of GNSS system. Moreover, increasing frequency of air travel, backed by rising number of passengers travelling via air transport, is further estimated to boost the market growth. CLICK TO DOWNLOAD SAMPLE REPORT

On the basis of geographical analysis, the global satellite-based GNSS augmentation system market is segmented into five major regions including North America, Europe, Asia Pacific, Latin America and Middle East & Africa region. The market in Europe region is estimated to witness noteworthy growth over the forecast period on the back of increasing demand for air transportation, along with higher adoption of advanced technology in the region.

The market in the North America region is anticipated to gain the largest market share throughout the forecast period owing to the presence of major market players in the region, along with adoption of satellite-based services, such as, GPS, in the developed countries. Moreover, growing aviation industry is further anticipated to boost the market growth. For instance, the commercial aviation industry contributes to more than 5% of the GDP of U.S. every year. 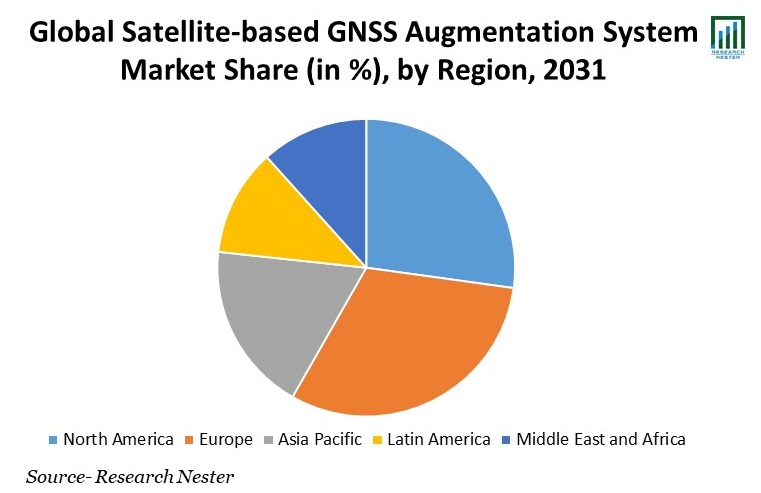 The global satellite-based GNSS augmentation system market is further classified on the basis of region as follows:

What are the major factors driving the growth of the satellite-based GNSS augmentation system market?

Higher precision, dependency, and demand for satellite based navigation services are estimated to boost the market growth.

What would be the CAGR of satellite-based GNSS augmentation system market over the forecast period?

The North America region is anticipated to provide more business opportunities over the forecast period owing to the growing aviation industry in the region.

Who are the major players dominating the satellite-based GNSS augmentation system market?

What are the segments in the satellite-based GNSS augmentation system market?

The market is segmented by application, platform, and by region.

The aviation segment is anticipated to hold largest market size over the forecast period and display significant growth opportunities.

Privacy concerns amongst people regarding satellites, along with increasing competition from other technologies are estimated to hamper the market growth.