·    February 16, 2021- Terra Drone and INPEX Corporation joined hands to launch INPEX-Terra Drone Intelligent Drone Plan, which seeks to promote digital transformation and sustainable growth of natural gas industry in Japan and other parts of the world.

The global renewable drones market is estimated to garner a large revenue and grow at a CAGR of ~28% over the forecast period, i.e., 2022 – 2030. The growth of the market can be attributed to the increasing adoption of drones in order to reduce cost of inspection operation, growing emphasis on asset optimization, and rising demand for clean energy applications in drone technology. Along with these, there is a surge in usage of renewable drones in the solar energy sector, which is another factor expected to drive market growth in the near future. Furthermore, escalating establishment of renewable energy plants, mainly solar and wind farms, coupled with the rising focus on renewable energy generation, are projected to offer profitable opportunities for market growth in the upcoming years. According to the International Energy Agency, the use of renewable energy increased by 3 percent in 2020. In addition, the share of renewables in electricity generation globally rose up to 29 percent in 2020, up from 27 percent in 2019. 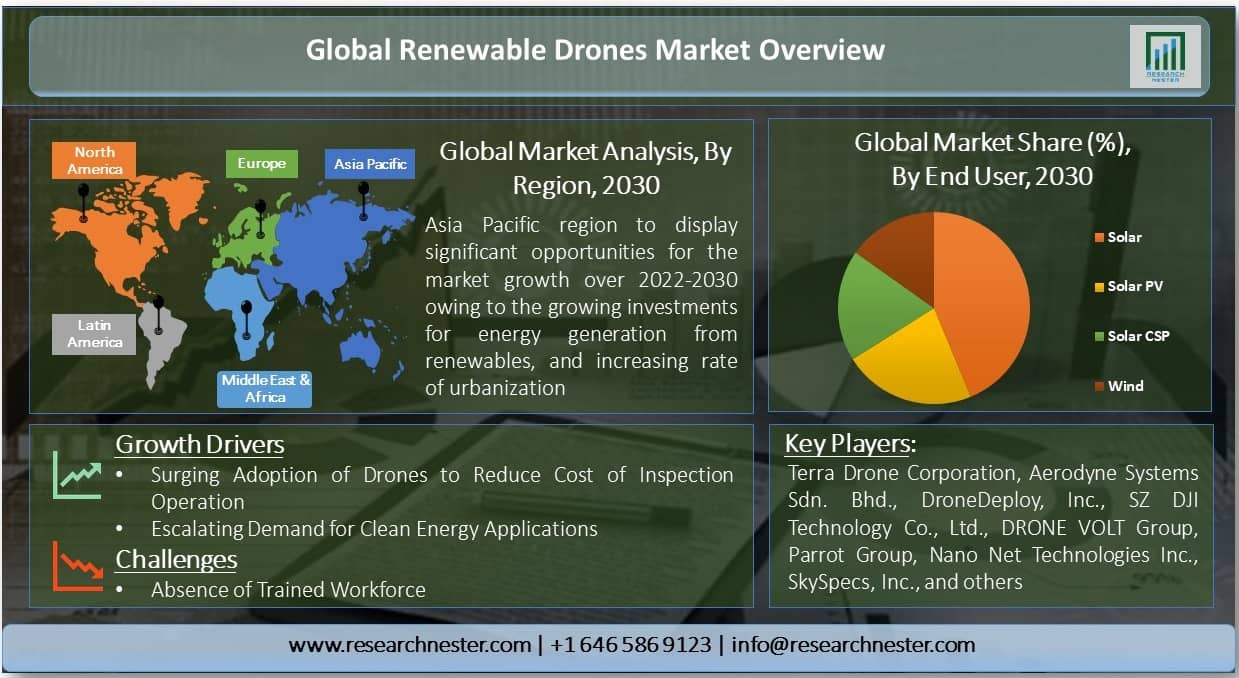 The market is segmented by end user into solar, solar PV, solar CSP, and wind, out of which, the solar segment is anticipated to hold the largest share in the global renewable drones market on account of the rising demand for solar farm maintenance and inspection, and growing awareness regarding flight operations and thermography among inspectors, asset owners and drone service providers. Additionally, on the basis of drone type, the multirotor segment is assessed to grab the largest share over the forecast period owing to the ability of multirotor drones to perform vertical takeoffs and landings, and requirement of less space by these devices to take flight. Moreover, based on solution, the segment for end-to-end solution is predicted to grab the most significant share by the end of 2030, which can be credited to the fact that this type of solution helps in avoiding issues associated with the use of continuously-updating drone technology.

On the basis of geographical analysis, the global renewable drones market is segmented into five major regions including North America, Europe, Asia Pacific, Latin America and the Middle East & Africa region. The market in Asia Pacific is estimated to witness noteworthy growth over the forecast period on the back of the increase in investments for the generation of renewable energy in developing countries of the region, especially China and India, and rising number of government initiatives to promote use of clean energy. In addition, growing population and rapid rate of industrialization, are also projected to drive the region’s market growth in the coming years. As per the data provided by the World Bank, the population of South Asia grew up to 1.875 billion in 2020, up from 1.836 billion in the previous year. India is the most populated country in the region, accounting for about 1.38 billion people. Moreover, the market in North America is anticipated to gather the largest share during the forecast period ascribing to the imposition of favorable policies for use of solar energy and rise in demand for renewable drones from several end-user industries in the region.

The global renewable drones market is further classified on the basis of region as follows:

Our in-depth analysis of the global renewable drones market includes the following segments:

What are the major factors driving the growth of the renewable drones market?

What would be the CAGR of renewable drones market over the forecast period?

What are the challenges affecting the renewable drones market growth?

Lack of skilled professionals is estimated to hamper the market growth.

Which region will provide more business opportunities for growth of renewable drones market in future?

Asia Pacific will provide more opportunities for market growth owing to the increase in investments for the generation of renewable energy in developing countries of the region.

Who are the major players dominating the renewable drones market?

What are the segments in the renewable drones market?

The market is segmented by drone type, solution, end user, and by region.

Which segment captures the largest market size in the end user segment in the renewable drones market?

The solar segment is anticipated to hold largest market size and is estimated to grow at a notable CAGR over the forecast period and display significant growth opportunities.