The global renewable PVDF market is estimated to gather a sizeable revenue by growing at a ~9% CAGR over the forecast period, i.e., 2022 – 2030. The growth of the market can be attributed to the growing production of electric vehicles around the world, and rising demand for lithium-ion batteries in automotive applications. For instance, as per the International Energy Agency, the sales of electric vehicles increased up to 2.1 million globally in 2019, and the stock rose up to 7.2 million electric cars. Along with these, rising investments in renewable energy in developed and developing nations, and enforcement of strict regulations regarding conventional crude oil derived polymers, are also expected to drive market growth in the coming years. Furthermore, PVDF has exceptional abrasion and radiation resistance, along with being highly melt processable, which is also predicted to expand its market in the imminent time. 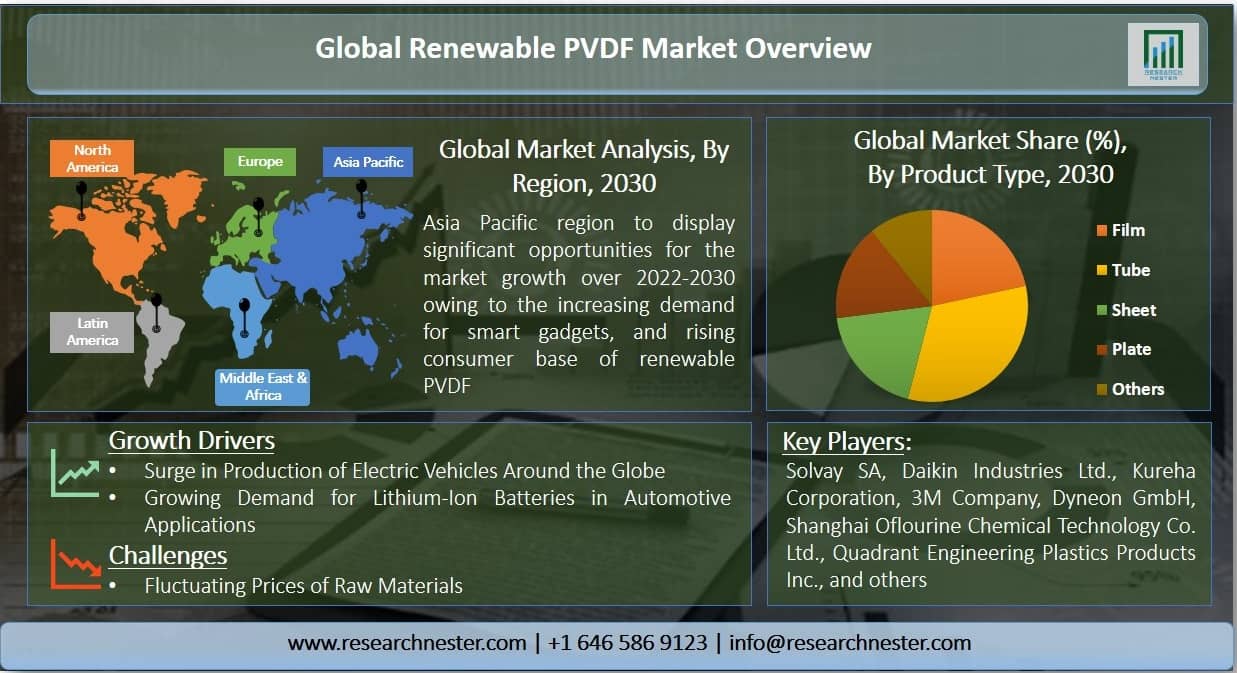 The market is segmented by end user into automotive, chemical, pharmaceutical, construction, semiconductor, aerospace and defense, water treatment, and others, out of which, the aerospace and defense segment is anticipated to hold the largest share in the global renewable PVDF market on account of the fact that several airplane parts such as rotors and engines require hard and weather resistant coatings. In addition, as PVDF coatings can withstand high temperatures, they are extensively used in the aerospace industry, which in turn is predicted to drive growth to the market segment in the future. Moreover, on the basis of product type, the tube segment is predicted to grab the largest share over the forecast period owing to the ease of installation, high cost-effectiveness, and superior chemical resistance of this product.

On the basis of geographical analysis, the global renewable PVDF market is segmented into five major regions including North America, Europe, Asia Pacific, Latin America and the Middle East & Africa region. The market in the Asia Pacific is estimated to witness noteworthy growth over the forecast period on the back of the increasing demand for smart gadgets and other smart electronic devices in India and China, and rising consumer base of renewable PVDF in the region. Apart from these, growing construction activities and rising energy demand are also predicted to drive the region’s market growth in the future. Electricity consumption per capita reached 860 kWh in 2020, around the two thirds of the Asian average. Due to the Covid-19 crisis, total energy consumption fell by 3.4% in 2020 to 908 Mtoe. Additionally, the market in North America is assessed to acquire the largest share during the forecast period, which can be credited to the growing development of innovative products and strong presence of lithium-ion battery manufacturers in the region.

The global renewable PVDF market is further classified on the basis of region as follows:

Our in-depth analysis of the global renewable PVDF market includes the following segments:

1) What are the major factors driving the growth of the renewable PVDF market?

Ans: The major factors driving market growth are growing production of electric vehicles around the world and rising demand for lithium-ion batteries in automotive applications.

2) What would be the CAGR of renewable PVDF market over the forecast period?

3) What are the challenges affecting the renewable PVDF market growth?

4) Which region will provide more business opportunities for growth of renewable PVDF market in future?

Ans: Asia Pacific will provide more business opportunities for market growth owing to the increasing demand for smart gadgets and other smart electronic devices in India and China, and rising consumer base of renewable PVDF in the region.

5) Who are the major players dominating the renewable PVDF market?

Ans: The major players in the market are Solvay SA, Daikin Industries Ltd., Kureha Corporation, 3M Company, and others.

7) What are the segments in the renewable PVDF market?

Ans: The market is segmented by product type, end user, and by region.

8) Which segment captures the largest market size in the product type segment in the renewable PVDF market?

Ans: The tube segment is anticipated to hold largest market size and is estimated to grow at a notable CAGR over the forecast period and display significant growth opportunities.