The global renewable energy transformer market is estimated to grow with a high CAGR during the forecast period, i.e., 2022-2030. One of the major factors expected to contribute to the market's growth is the increasing demand for power supply worldwide. Furthermore, there is a need for sustainable development around the world leading to the rise in demand for renewable energy, which in turn is expected to boost the demand for renewable energy transformers in the upcoming years. In addition to thee, rising number of government initiatives for the generation of renewable energy, and emphasis of companies to provide innovative solutions for generating and storing renewable energy are also projected to fuel the progress of the market in the near future. According to the International Renewable Energy Agency (IRENA), the world generated 2.53 million megawatts of renewable energy globally in 2019, which was approximately 27.9% of the total power generated in the world. 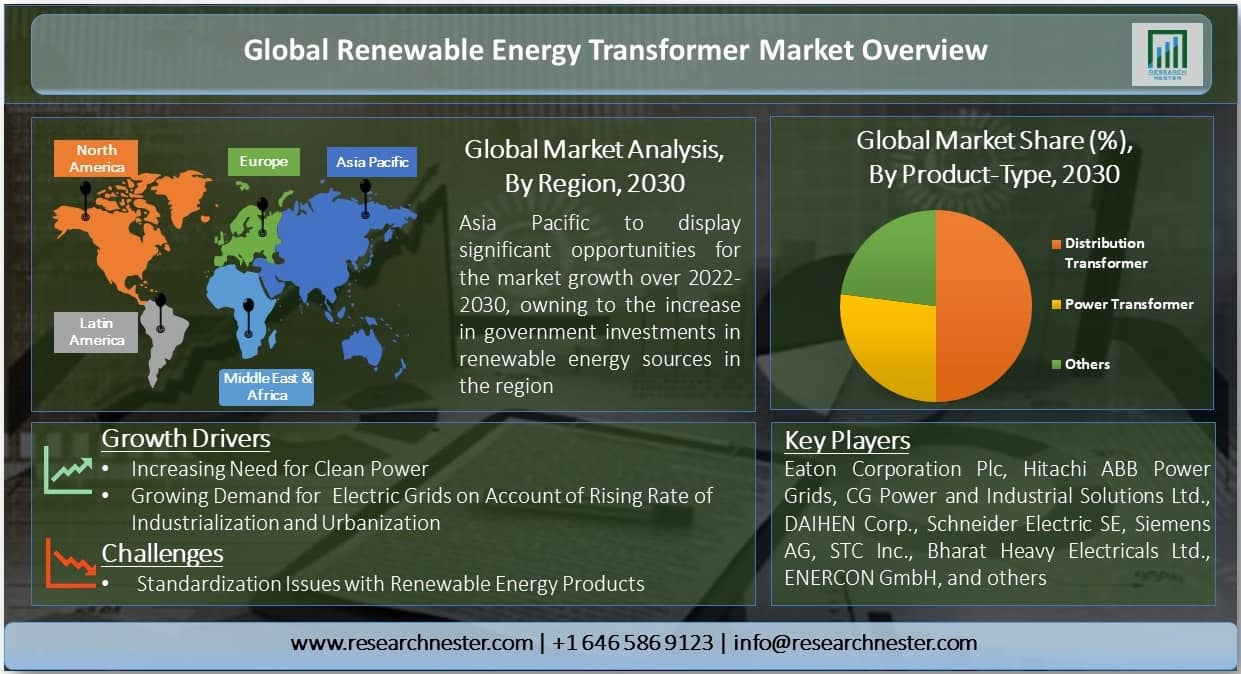 The market is segmented by product-type into distribution transformer, power transformer, and others, out of which, the distribution transformer segment is anticipated to capture a significant share in the global renewable energy transformer market. This can be attributed to the increase in electricity consumption across the world and growing settlement of people in urban areas. According to the World Bank, the urban population increased up to 56.21% in 2020, up from 55.714% in 2019. Additionally, on the basis of application, the solar PV segment is anticipated to grow at the highest CAGR over the forecast period ascribing to the increased usage of solar panels globally. According to IRENA, the total amount of solar energy generated in 2019 was 584.8 megawatt and is estimated to increase as a result of a rise in the development of solar farms across the globe.

Geographically, the market is segmented into North America, Latin America, Europe, Asia Pacific, and the Middle East & Africa. The market in the Asia Pacific is anticipated to occupy the largest market share during the forecast period ascribing to the increasing transmission and infrastructural distribution spending for the development of long-distance electricity networks, and the growing usage of renewable energy in the region. For instance, according to India Brand Equity Foundation (IBEF), the installed renewable energy in India till February 2021 amounts to 92.97 gigawatt. Along with this, ongoing refurbishment activities in the long-existing grid infrastructure is also expected to fuel the demand for renewable energy transformers in APAC. Additionally, the market in North America is also predicted to occupy a notable market share, which can be credited to the rising installation of advanced electrical equipment in the region and increasing government initiatives for electricity generation via renewable energy sources. 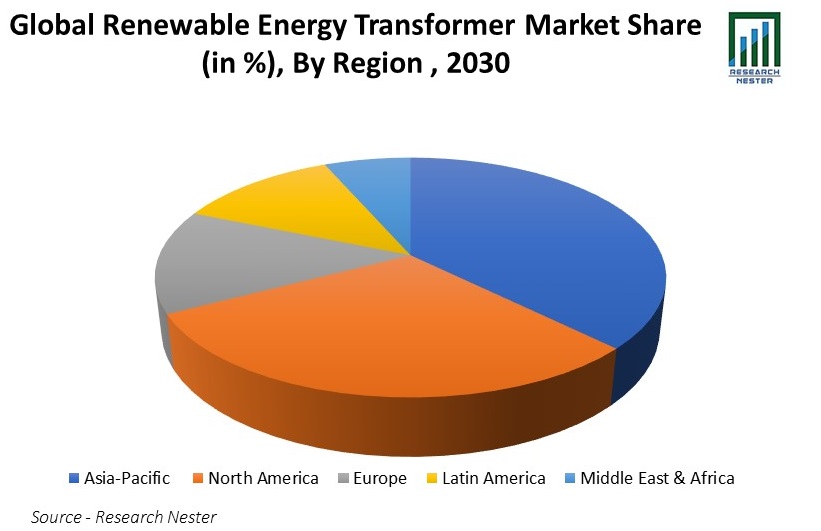 The global renewable energy transformer market is further classified on the basis of region as follows:

1) What are the major factors driving the growth of the renewable energy transformer market?

Ans: The rising demand for electric grids on account of increase in industrialization and urbanization is expected to drive the growth of the market.

2) What would be the CAGR of renewable energy transformer market over the forecast period?

3) What are the challenges affecting the renewable energy transformer market growth?

4) Which region will provide more business opportunities for growth of renewable energy transformer market in future?

Ans: The market in the Asia Pacific region will provide ample growth opportunities owing to the increasing number of government initiatives for renewable energy sources in the region.

5) Who are the major players dominating the renewable energy transformer market?

Ans: The company profiles are selected on the basis of revenues generated from the product segment, geographical presence of the company, which determines the revenue-generating capacity as well as the new products being launched into the market by the company.

7) What are the segments in the renewable energy transformer market?

Ans: The market is segmented by product-type, cooling-type, application, and by region.

8) Which segment under the product-type captures the largest market size in the renewable energy transformer market?

Ans: With respect to the product-type, the distribution transformer segment is anticipated to grow at a significant rate over the forecast period owing to the growing number of renewable energy projects across the world.