The global phosphate ester market is estimated to garner a revenue of about USD 1900 million by the end of 2031 by growing at a CAGR of ~6% over the forecast period, i.e., 2022 – 2031. Further, the market generated a revenue of approximately USD 1000 million in the year 2021. The extensive use of phosphate ester in multiple industries such as automotive, construction, and agriculture is expected to provide the stimulus necessary for the growth of the global phosphate ester market. Phosphate ester is known for its intrinsic fire-retardant ability which makes it valuable in extinguishing fires that are rampant across the globe. The increasing incidences of fire outbreaks are bound to raise the demand for fire extinguishers across the world. This, in turn, is estimated to boost the market growth. According to the United States Fire Administration, there were almost 1.3 million incidents of fires in the US in 2019, and more than 24% rise in deaths due to fire, compared to the year 2010. 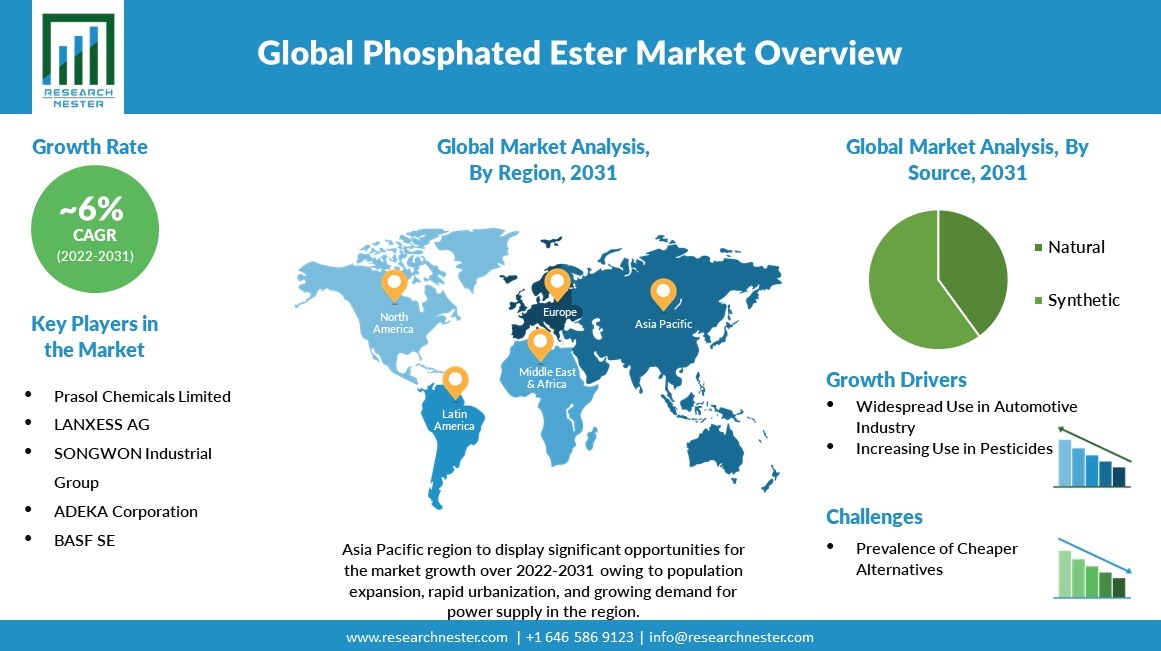 Phosphate Esters are also called Organophosphates (OPEs). They form the backbone of nucleic acids - DNA and RNA, that are vital for the storage and transmission of genetic material. Phosphate Esters are biochemical intermediates in the conversion of food into energy in plants and animal cells. They are highly used in the production of cleaners and detergents used in homes, institutions and industries owing to their wetting, anti-static and emulsifying properties. As per research, there was a rise in the amount spent by Europeans on household cleaning products such as surface care, dishwashing and bleaches, from USD 30 billion in 2019 to almost USD 33 billion in 2020, on the back of the pandemic.

Regionally, the global phosphate ester market is studied into five major regions including North America, Europe, Asia Pacific, Latin America and Middle East & Africa region. Amongst these markets, the market in Asia Pacific region is projected to hold the largest market share by the end of 2031. The population expansion, rapid urbanization, and a massive demand for power supply are predicted to impel the growth of the phosphate ester market in the region. For instance, China generated about 8000 terawatt hours of electricity in 2021, roughly 9% more when compared to its yield in 2020. Specially refined phosphate base stocks and additives are used in the manufacture of turbofluids that are employed in power generation applications. 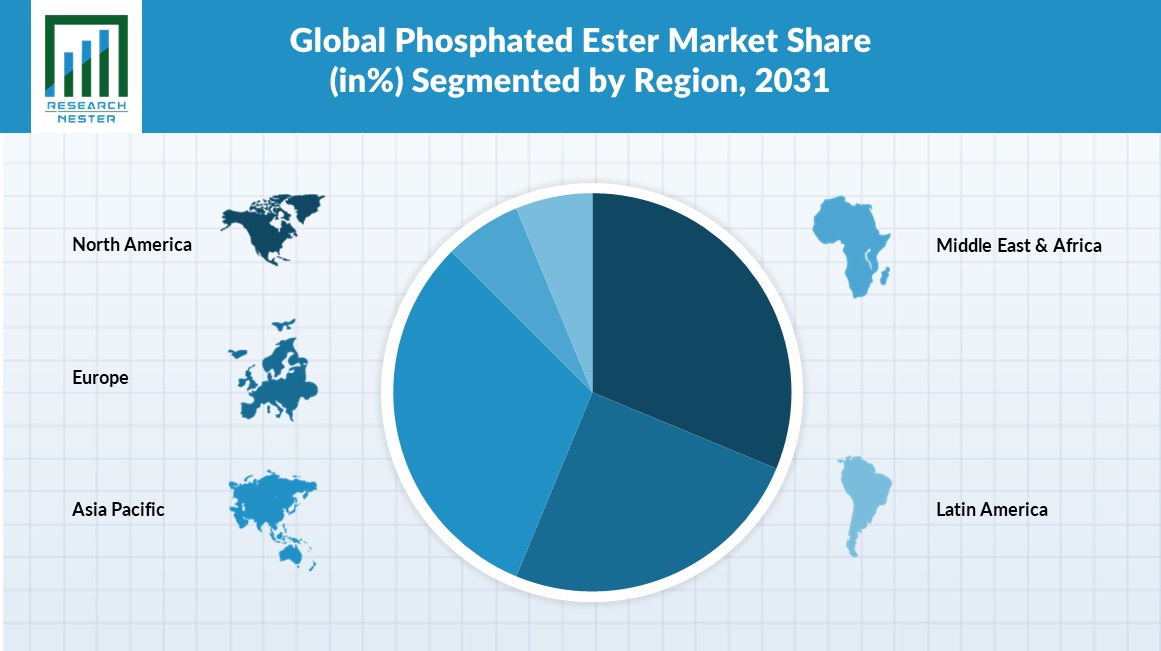 The global phosphate ester market is further classified on the basis of region as follows:

Our in-depth analysis of the global phosphate ester market includes the following segments:

What are the major factors driving the growth of the phosphate ester market?

Use of phosphate ester in automotive and agriculture industries as well as its use for mosquito control in public places are some of the major factors driving the growth of the phosphate ester market.

What would be the CAGR of phosphate ester market over the forecast period?

What are the challenges affecting the phosphate ester market growth?

The availability of low-cost alternatives to phosphate ester as fire retardant and the probability of health concerns if exposed for long duration are some of the challenges affecting market growth.

Which region will provide more business opportunities for growth of phosphate ester market in future?

Who are the major players dominating the phosphate ester market?

What are the segments in the phosphate ester market?

The market is segmented by source, type, application, end user, and by region.

Which segment captures the largest market size in type segment in the phosphate ester market?

The triaryl phosphate ester sector is anticipated to garner the largest market size by the end of 2031 and display significant growth opportunities.