The global power generation technologies market is estimated to grow at a CAGR of ~15% over the forecast period, i.e., 2022 – 2030. The growth of the market can be attributed to the growing demand for electricity, along with technological advancement and introduction of new technologies for power generation. Earlier, the generation of power was highly dependent on thermal power plants, which deployed steam turbines to produce electricity. However, with the innovation in technology, various new technologies, such as, nuclear reactor and solar power. According to the data by the International Environment Agency (IEA), in 2019, electricity generation from combustible fuels accounted for 65.3% of the total global electricity production. This high dependence on coal and other fossil fuels has significant side effects, such as, environmental degradation, and rapid depletion of fossil fuels. As per the report by Energy Information Administration (EIA), coal-based power plants are responsible for 73% of the carbon dioxide emissions in the environmental annually. To combat these issues, renewable sources of energy are being used for power generation. According to other data by the IEA, the global annual renewable capacity additions increased by 45% in 2020, which accounted for almost 280 GW electricity. Solar energy is estimated to touch 162 GW by 2022, while the wind energy capacity has reached 114 GW in 2021, which is 50% more than the capacity in 2017-19. Moreover, total global hydropower capacity valued at 1308 GW in 2020. 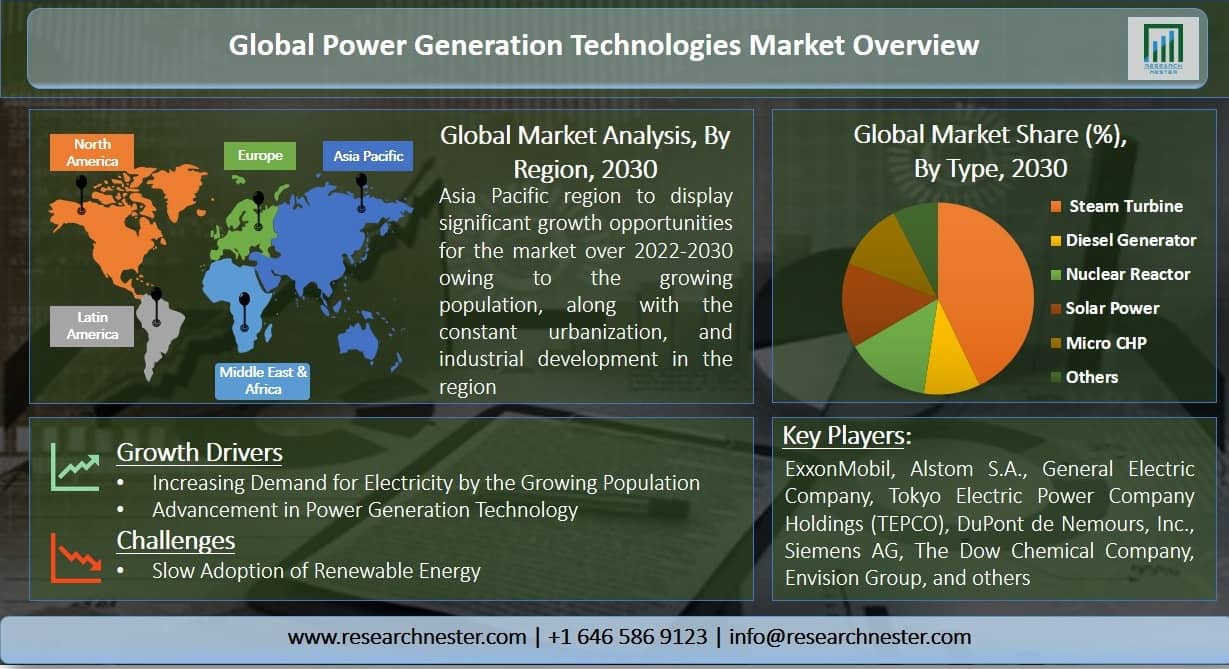 The market is segmented by type into steam turbine, diesel generator, nuclear reactor, solar power, micro-CHP, and others, out of which, the steam turbine segment holds the largest share in the global power generation technologies market currently owing to the large share of electricity generated by thermal power plants. However, this segment is anticipated to witness gradual decline over the forecast period on account of increasing adoption of renewable energy. Despite the aftereffects of COVID-19 pandemic, installed renewable power capacity experienced a raise of 6% globally, according to the data by the IEA. On the other hand, the solar power segment is estimated to gain notable market share over the forecast period, owing to the rising acceptance of solar cells and panels on a residential as well as commercial level, along with high number of operational utility-scale solar plants.

On the basis of geographical analysis, the global power generation technologies market is segmented into five major regions including North America, Europe, Asia Pacific, Latin America and Middle East & Africa region. The market in Asia Pacific region is estimated to witness noteworthy growth over the forecast period on the back of increasing demand for power in the region, backed by the growing population, urbanization and constant industrial development in the region.

The market in the North America region is anticipated to gain the largest market share throughout the forecast period owing to the presence of large number of power plants, along with rapid adoption of renewable energy. As per the report by Energy Information Administration (EIA), in 2020, over 60% of the total electricity generation in the United States, was from fossil fuels, including, coal, natural gas, and petroleum. Apart from this, about 20% electricity was generated from nuclear energy, and about 20% was from renewable energy sources. 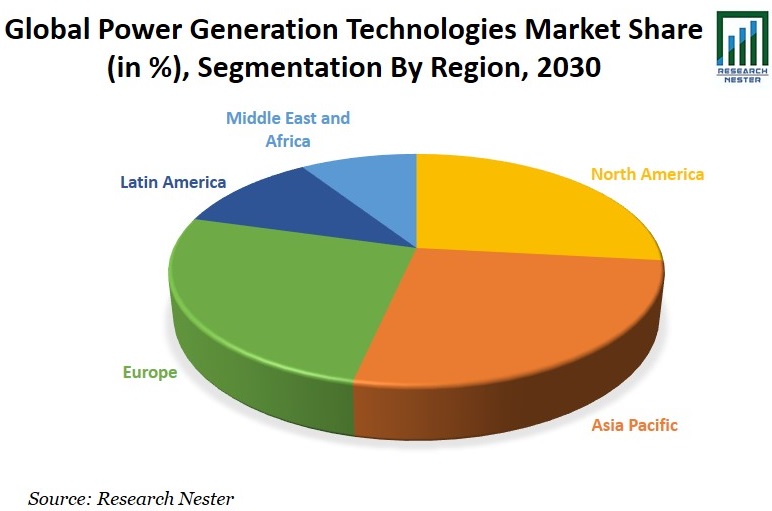 The global power generation technologies market is further classified on the basis of region as follows:

What are the major factors driving the growth of the power generation technologies market?

Advancement in power generation technologies is estimated to boost the market growth.

What would be the CAGR of power generation technologies market over the forecast period?

What are the challenges affecting the power generation technologies market growth?

High investment, and slow implementation are estimated to hamper the market growth.

Which region will provide more business opportunities for growth of power generation technologies market in future?

The market in Asia Pacific is estimated to garner the largest market share owing to the large population, urbanization, and growing economic development in the region.

Who are the major players dominating the power generation technologies market?

What are the segments in the power generation technologies market?

The market is segmented by type, application, and by others.

Which segment captures the largest market size in type segment in the power generation technologies market?

The steam turbine segment is anticipated to hold largest market size over the forecast period owing to the high dependance on thermal power.