·    May 2021- Exeger secured a deal worth USD 38 million to build a manufacturing facility in Sweden with the help of ABB. The factory is aimed to ramp up the production of dye-sensitized solar cells.

·    July 2020- Fujikura released a lineup of thin dye-sensitized solar cell module panel and started the sales of those panels.

The global dye-sensitized solar cells market is estimated to garner a sizeable revenue and grow at a CAGR of ~12% over the forecast period, i.e., 2022 – 2030. The growth of the market can be attributed to the rising investments towards renewable resources owing to the increasing energy demand and depletion of conventional energy resources. According to the International Energy Agency, the share of renewables in power generation in the Sustainable Development Scenario was 27 percent in 2019, up from 25 percent and 24 percent in 2018 and 2017 respectively. Along with these, surge in technological innovations associated with solar cells, and escalating demand for solar energy as a result of growing carbon emissions are also expected to drive market growth in the upcoming years. Furthermore, dye-sensitized solar cell technology offers several benefits over conventional energy sources such as high-performance ratio, ability to provide electricity at low light conditions, and cost-effectiveness. This in turn is projected to raise the demand for the product significantly in the near future. 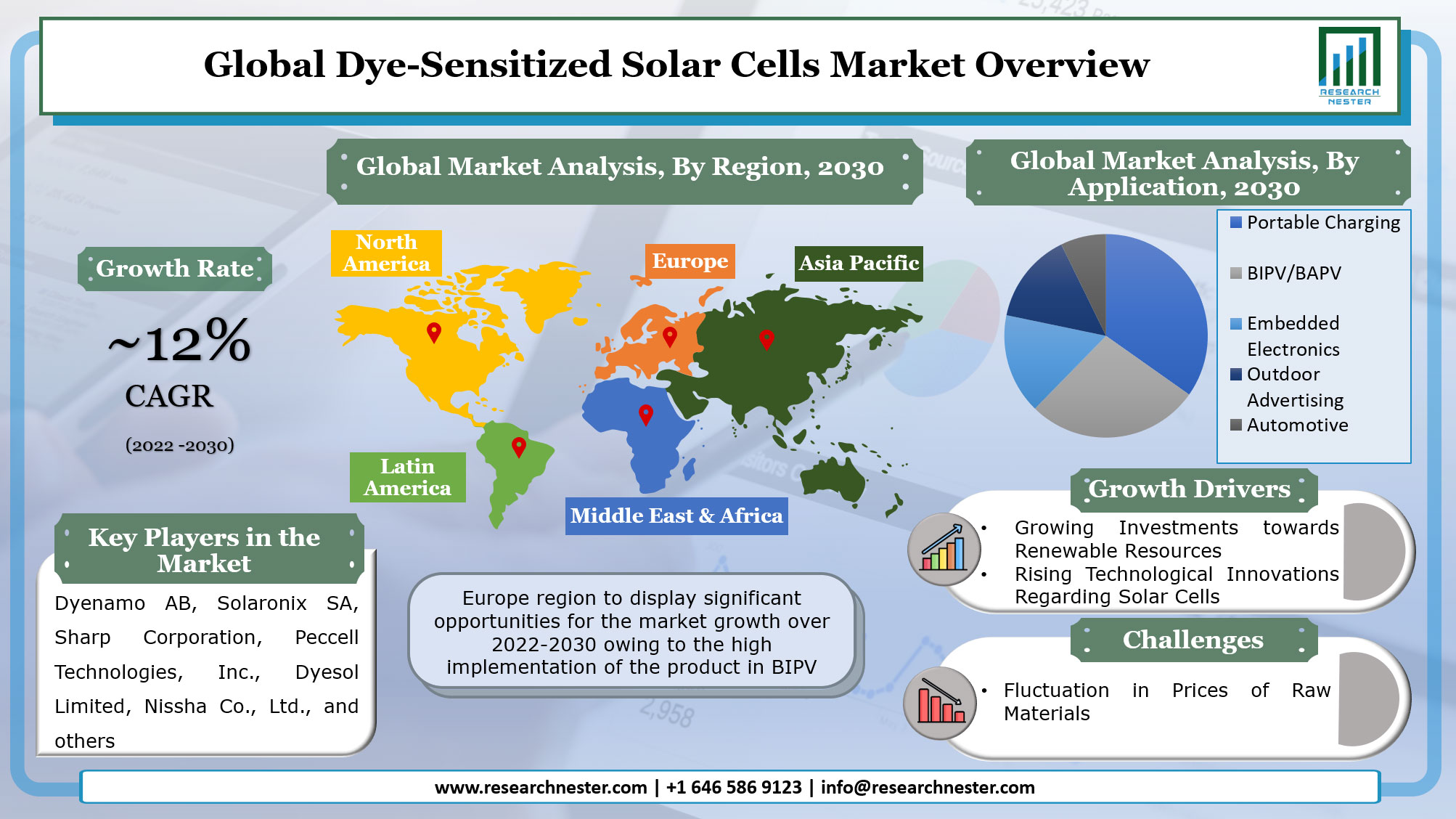 The market is segmented by application into portable charging, BIPV/BAPV, embedded electronics, outdoor advertising, and automotive, out of which, the portable charging segment is anticipated to hold the largest share in the global dye-sensitized solar cells market. This can be accounted to the growing demand for dye-sensitized cells in portable charging owing to their ability to offer optimal wattage in mobile devices. Apart from these, the building applied photovoltaics (BAPV)/building-integrated photovoltaics (BIPV) segment is predicted to witness the highest growth in the future ascribing to the increasing demand for energy from residential areas for rooftop panels and water heating. Additionally, on the basis of type of dye, the natural segment is assessed to occupy the largest share during the forecast period, which can be credited to the fact that natural dyes cut down the high cost of metal complex sensitizer notably. CLICK TO DOWNLOAD SAMPLE REPORT

On the basis of geographical analysis, the global dye-sensitized solar cells market is segmented into five major regions including North America, Europe, Asia Pacific, Latin America and the Middle East & Africa region. The market in Europe is estimated to gather the largest share over the forecast period on the back of the initiatives by European Commission to reduce dependence on non-renewable energy sources, and high rate of installation of dye-sensitized solar cells in BIPV. In addition, rise in use of portable electronics is also expected to boost the growth of the market in the region in the coming years. Moreover, the market in North America is also anticipated to grab notable share during the forecast period owing to the increasing demand for energy, and trend of sustainable power development in the region. As per the U.S. Energy Information Administration, 35.74 quadrillion Btu of electric power was consumed in 2020, whereas total energy consumption was around 93 quadrillion Btu that year. 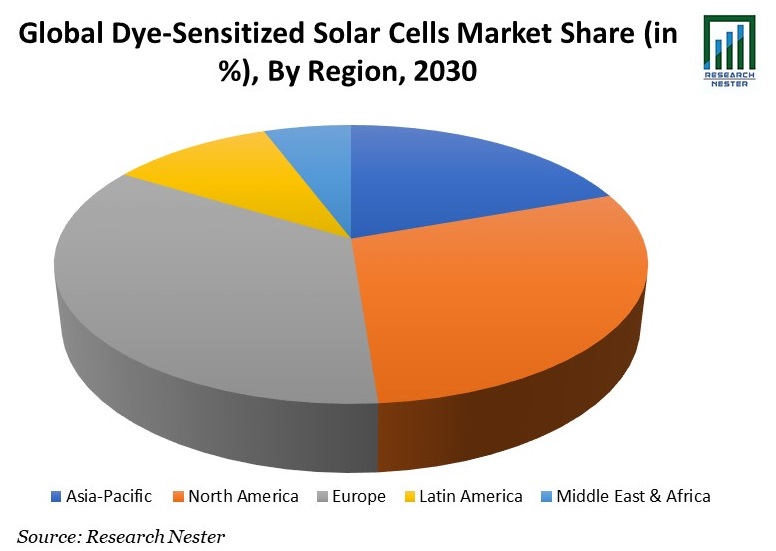 The global dye-sensitized solar cells market is further classified on the basis of region as follows:

By Type of Dye

What are the major factors driving the growth of the dye-sensitized solar cells market?

The major factors driving growth are rising investments towards renewable resources, and surge in technological innovations associated with solar cells.

What would be the CAGR of dye-sensitized solar cells market over the forecast period?

What are the challenges affecting the dye-sensitized solar cells market growth?

Fluctuating prices of raw materials are estimated to hamper the market growth.

Which region will provide more business opportunities for growth of dye-sensitized solar cells market in future?

Europe will provide more business opportunities for market growth owing to the initiatives by European Commission to reduce dependence on non-renewable energy sources, and high rate of installation of dye-sensitized solar cells in BIPV.

Who are the major players dominating the dye-sensitized solar cells market?

The major players in the market are Dyenamo AB, Solaronix SA, Sharp Corporation, Peccell Technologies, Inc., Dyesol Limited, and others.

What are the segments in the dye-sensitized solar cells market?

The market is segmented by type of dye, application, and by region.

Which segment captures the largest market size in the type of dye segment in the dye-sensitized solar cells market?

The natural segment is anticipated to hold largest market size and is estimated to grow at a robust CAGR over the forecast period and display significant growth opportunities.