The global organic PV solar cells market is estimated to grow at a CAGR of ~18% over the forecast period, i.e., 2022 – 2030. The growth of the market can be attributed to the various advantages of organic solar cells over the silicon cells, such as, lightweight, organically disposable, inexpensive to fabricate, flexible, and customization on the molecular level. Organic PV solar cells are made up of conductive organic polymers, and are environment friendly in nature, which is estimated to boost their demand in the market. Moreover, rising government initiatives to promote the use of solar energy is estimated to drive the market growth. According to the statistics by the International Energy Agency (IEA), solar PV power generation has increased by 22% in 2019, which equals to over 720 TWh energy. The adoption of solar energy is estimated to further improve, as organic photovoltaic cells are cheaper, hence more affordable. This is estimated to improve their adoption over the traditional solar cells. 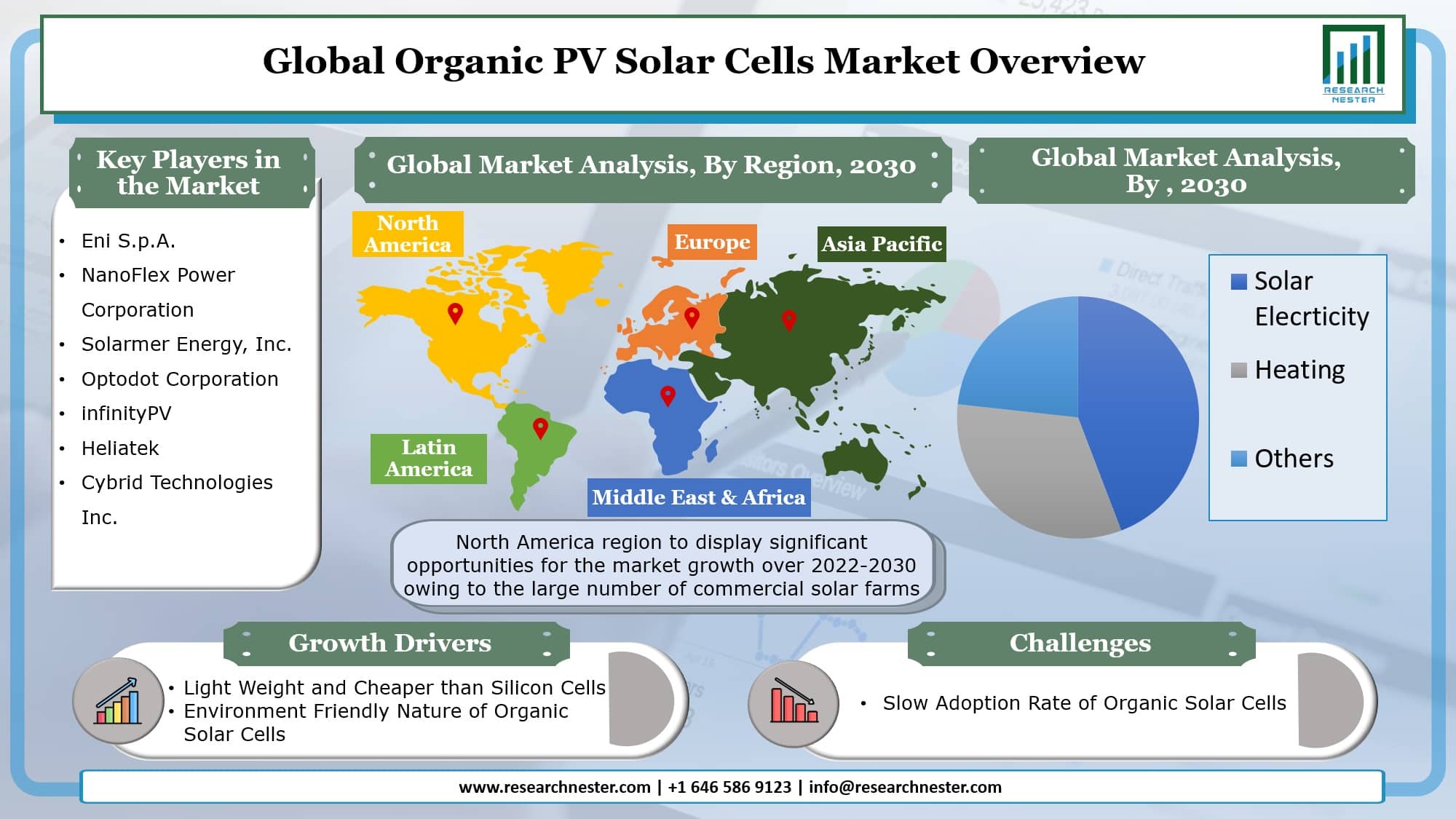 The market is segmented by end-user into residential, industrial, commercial and others, out of which, the commercial segment is anticipated to hold the largest share in the global organic PV solar cells market during the forecast period on account of rapid commercialization of solar power plants, and affordability of organic solar cells, which can save significant cost at the commercial level. Moreover, increasing investment in renewable energy sources by government and major private companies is also estimated to boost the market growth. CLICK TO DOWNLOAD SAMPLE REPORT

On the basis of geographical analysis, the global organic PV solar cells market is segmented into five major regions including North America, Europe, Asia Pacific, Latin America and Middle East & Africa region. The market in Asia Pacific region currently holds noteworthy market share over the forecast period on the back of the large number of solar power plants present in countries, such as, China, India, and Japan. The solar power production in China increased over 550%, in Japan increased by 143%, in India by 750%, and in Singapore by 525% in the past 5 years. The growing adoption of solar energy, and advantages offered by organic solar cells over silicon solar cells are further estimated to boost the growth of the regional market.

The market in the North America region is anticipated to gain the largest market share throughout the forecast period owing to the presence of major market players, and high acceptance of new technologies in the region. Moreover, growing government investment in renewable energy sources, and favorable government policies, such as, federal tax incentives on installation of solar panels, are also estimated to boost the market growth. 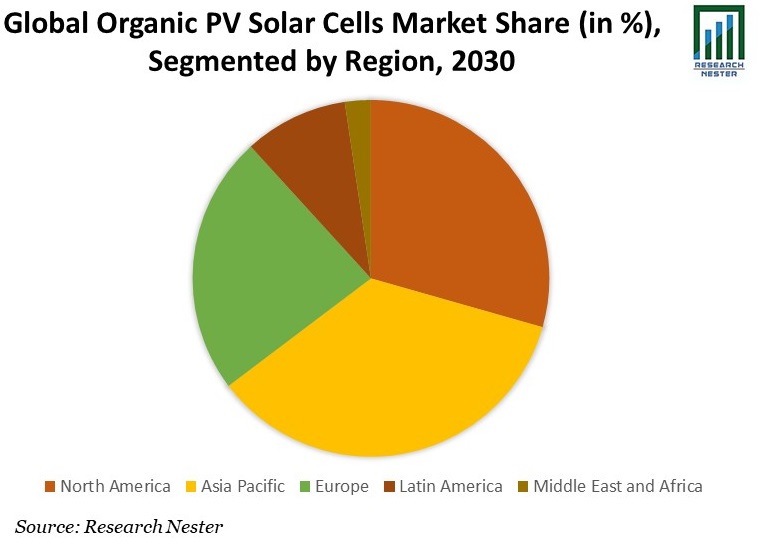 The global organic PV solar cells market is further classified on the basis of region as follows:

What are the major factors driving the growth of the organic PV solar cells market?

The various advantages offered by organic PV over silicon cells to boost the market growth.

What would be the CAGR of organic PV solar cells market over the forecast period?

What are the challenges affecting the organic PV solar cells market growth?

The slow adoption of organic PV solar cells is estimated to hamper the market growth.

The market in Asia Pacific is estimated to garner the largest market share owing to the large number of commercial solar farms, and high adoption of organic cells in the region.

Who are the major players dominating the organic PV solar cells market?

What are the segments in the organic PV solar cells market?

The market is segmented by application, end-user, and by region.

The commercial segment is anticipated to hold largest market size over the forecast period and display significant growth opportunities.