The global west syndrome market is estimated to garner robust revenue by the end of 2033 by growing at a CAGR of ~5% over the forecast period, i.e., 2023 – 2033. Further, the market generated remarkable revenue in the year 2022. The growth of the market can primarily be attributed to the rising prevalence of epilepsy. World Health Organization (WHO) provided a report stating that nearly 5 million individuals are diagnosed with epilepsy every year. 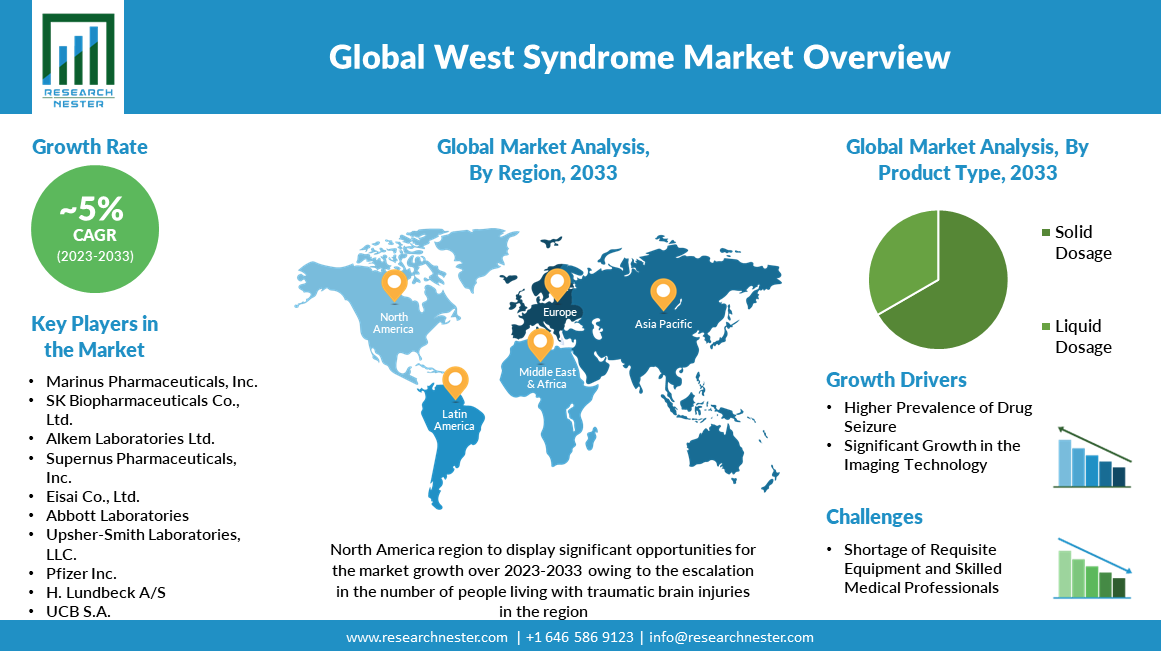 Global west syndrome market trends such as, growing awareness of west syndrome in the global population and rising healthcare expenditure are projected to influence the growth of the market positively over the forecast period. In a report published by the World Bank, it was stated that in 2019, the healthcare expenditure reached 1,121.9 per capita. West syndrome is a serious medical condition with a drastically irregular pattern of brain waves which is also known as hypsarrhythmia. West syndrome also includes features such as, infantile spasms and loss of developmental milestones. Moreover, spiking R&D spending on neurological illnesses and the rising inclination of the global population toward novel therapies are further anticipated to propel the growth of the market over the forecast period.

As of 2019, around 200,000 people were noticed to be hospitalized while nearly 62,000 people died due to traumatic brain injuries in same year.

Traumatic brain injury, shortly known as TBI can affect the functionality of the brain in multiple ways. It is categorized into two categories that are closed and penetrating brain injury. TBI can also cause death and serious disabilities becoming the major causes of death in the United States. Hence, such a higher prevalence is estimated to hike the market growth over the forecast period.

In 2022-21, about 5500 drug seizures per million inhabitants were observed solely in London.

For instance, the diagnostic imaging devices segment was valued at nearly USD 45 billion in 2022.

Based on the data released by Pan American Health Organization (PAHO), in 2019, about 533,172 people died due to neurological conditions in the United States.

The global west syndrome market is segmented and analyzed for demand and supply by product type into solid dosage (tablet and capsule), and liquid dosage (injectable and others), out of which, the solid dosage segment is projected to witness noteworthy growth over the forecast period. The growth of the segment can be accounted to the rising consumption of medicine across the globe. For instance, in 2021, global medicine spending was estimated to be nearly USD 1 trillion.

Regionally, the global west syndrome market is studied into five major regions including North America, Europe, Asia Pacific, Latin America and Middle East & Africa region. Amongst these markets, the market in North America region is projected to hold the largest market share by the end of 2033. The growth of the market can be accounted to the escalation in the number of people living with traumatic brain injuries. For instance, in 2020, more than 60,000 people lost their lives due to traumatic brain injuries solely in the USA while approximately 150 death occurs on a daily basis in the same region. 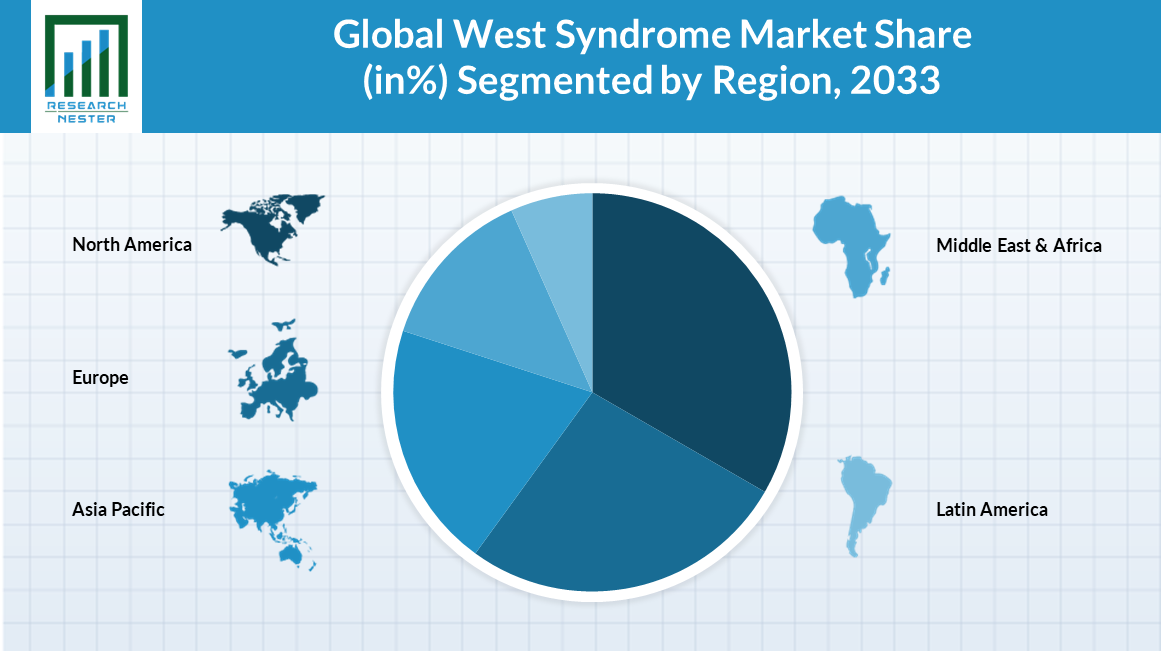 The global west syndrome market is further classified on the basis of region as follows:

Our in-depth analysis of the global west syndrome market includes the following segments:

What are the major factors driving the growth of the west syndrome market?

Higher prevalence of drug seizures and significant growth in imaging technology are estimated to majorly boost the market growth.

What would be the CAGR of west syndrome market over the forecast period?

What are the challenges affecting the west syndrome market growth?

Shortage of requisite equipment and skilled medical professionals is estimated to challenge the market growth.

Which region will provide more business opportunities for growth of west syndrome market in future?

The market in North America region is projected to hold the largest market share by the end of 2033 and provide more business opportunities in the future.

Who are the major players dominating the west syndrome market?

What are the segments in the west syndrome market?

Which segment captures the largest market size in product type in the west syndrome market?

The solid dosage segment is anticipated to garner the largest market size by the end of 2033 and display significant growth opportunities.