The global underground mining market is estimated to grow at a CAGR of ~18% over the forecast period, i.e., 2022 – 2030. The growth of the market can be attributed to the increasing demand for metal, coal and other end-products obtained from mining, backed by tremendous industrial growth globally. The rising application of metal, minerals, coal, ores, and others, in various end-user industries, including energy & power, automotive, construction, and others. According to the data by the Organization for Economic Co-operation and Development (OECD), construction industry accounts for approximately 50% of total world steel consumption. Increasing investment in the mining sector backed by the growth in the end-user industries is estimated to boost the market growth. 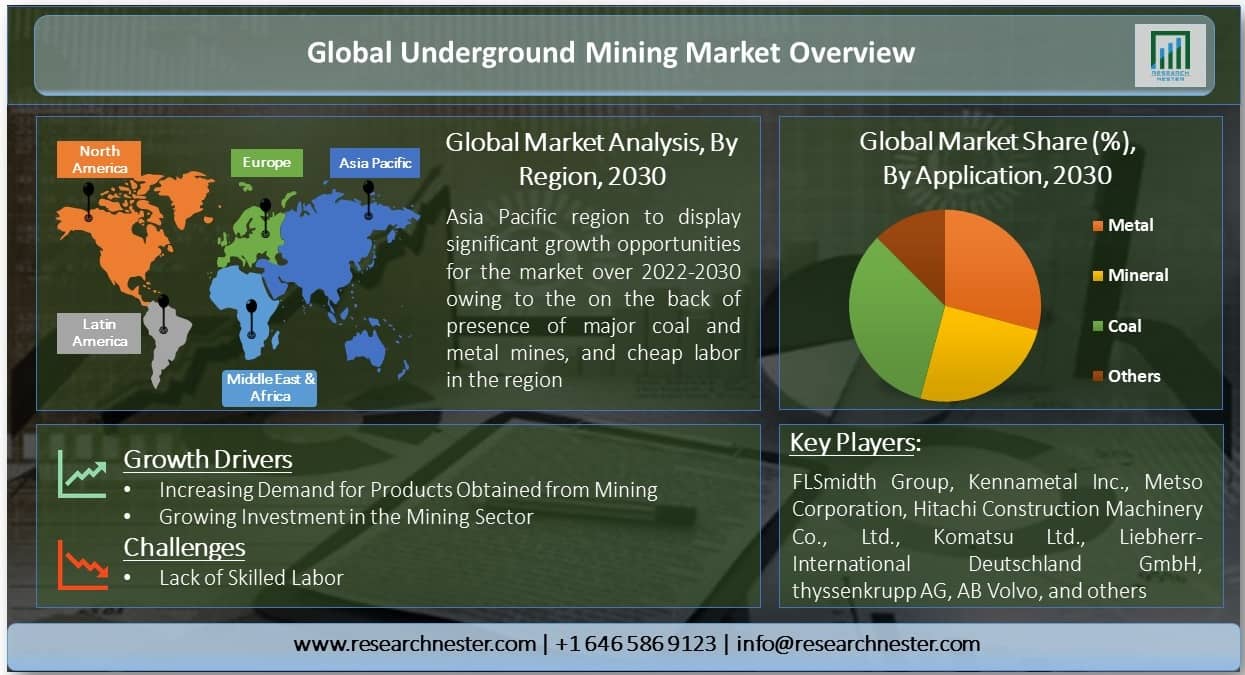 The market is segmented by application into metal, mineral, coal, and others, out of which, the coal segment is anticipated to hold the notable share in the global underground mining market over the forecast period on account of increasing demand for coal as a raw material in the thermal power plants. According to the statistics by the International Energy Agency (IEA), global coal-fired power generation capacity crossed 2,125 GW in 2020. CLICK TO DOWNLOAD SAMPLE REPORT

The chemical industry is a major component of the economy. According to the U.S. Bureau of Economic Analysis, in 2020, for the U.S., the value added by chemical products as a percentage of GDP was around 1.9%. Additionally, according to the World Bank, Chemical industry in the U.S. accounted for 16.43% to manufacturing value-added in 2018. With the growing demand from end-users, the market for chemical products is expected to grow in future. According to UNEP (United Nations Environment Programme), the sales of chemicals are projected to almost double from 2017 to 2030. In the current scenario, Asia Pacific is the largest chemical producing and consuming region. China has the world’s largest chemical industry, that accounted for annual sales of approximately more than USD 1.5 trillion, or about more than one-third of global sales, in recent years. Additionally, a vast consumer base and favorable government policies have boosted investment in China’s chemical industry. Easy availability of low-cost raw material & labor as well as government subsidies and relaxed environmental norms have served as a production base for key vendors globally. On the other hand, according to the FICCI (Federation of Indian Chambers of Commerce & Industry), the chemical industry in India was valued at 163 billion in 2019 and it contributed 3.4% to the global chemical industry. It ranks 6th in global chemical production. This statistic shows the lucrative opportunity for the investment in businesses in Asia Pacific countries in the upcoming years.

On the basis of geographical analysis, the global underground mining market is segmented into five major regions including North America, Europe, Asia Pacific, Latin America and Middle East & Africa region. The market in Asia Pacific region is estimated to witness noteworthy growth over the forecast period on the back of large coal reserves in countries, such as, India and Bangladesh. According to the data by the Central Electricity Authority, electricity generated by coal accounted for around 75% of the total power generation in India, in 2020. Moreover, presence of major steel production plants in the APAC region, increasing mining activities, and availability of cheap labor for mining are a few major factors estimated to boost the market growth.

The market in the North America region is anticipated to gain the largest market share throughout the forecast period on the back of presence of major mining sites for minerals in the regions of Canada, and the United States. 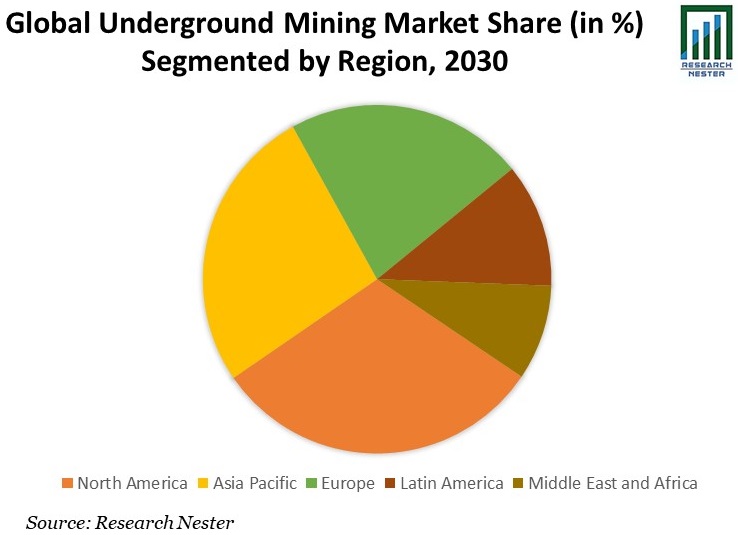 The global underground mining market is further classified on the basis of region as follows:

Our in-depth analysis of the global underground mining market includes the following segments:

What are the major factors driving the growth of the underground mining market?

The increasing demand for metal, minerals, and coal, which are obtained through underground mining, is estimated to boost the market growth.

What would be the CAGR of underground mining market over the forecast period?

What are the challenges affecting the underground mining market growth?

The lack of skilled workers for mining are estimated to hamper the market growth.

Which region will provide more business opportunities for growth of underground mining market in future?

The market in Asia Pacific region is estimated to provide major growth opportunities over the forecast period, on the back of presence of major coal and metal mines in the region.

Who are the major players dominating the underground mining market?

What are the segments in the underground mining market?

The market is segmented by equipment, application, and by region.

Which sub-segment captures the largest market size in application segment in the underground mining market?

The coal segment is anticipated to hold largest market size over the forecast period and display significant growth opportunities.

Weathering Steel Market Segmentation By Type (Corten-A and Corten-B); By Form (Bars, Sheets, Plates and Others); By Availability (Painted and Unpainted) and By Application (Building and Construction, Transportation, Industrial, Architecture and Others) – Global Demand Analysis & Opportunity Outlook 2028