Titanium dioxide, also known as titania, is one of the whitest material on earth and naturally occurring oxide of titanium. It is generally made from anatase, rutile and ilmenite and has the highest refractive index out of all the materials ever known to mankind. However, it is not found in a readily usable form. Therefore it needs to be mined carefully into its pure form and refined into fine size. It has wide ranging applications from sunscreen to food coloring. Owing to its desirable physical properties, it is extensively used for manufacturing paints, coatings and plastic compounders.

The titanium dioxide market is expected to attain a significant CAGR during the forecast period 2020-2028. This can be attributed to higher demand of pigments in various industries, automobiles and construction activities. The market is segmented by application into paints, coatings, plastics, photo-electrode, pigment, paper, cosmetics, food additives and others, out of which, the paints and coatings segment is anticipated to grow at the highest rate over the forecast period on the back of rising building and construction activities across the world. Recent boom in the male cosmetics market and rising per capita income in the developing countries is set to drive the demand for cosmetics in the coming years, which is projected to further propel the market growth during the forecast period.

Residential and commercial construction has gained a substantial pace in the last few years and is expected to grow at a notable rate in the coming years. As paints and coatings are used extensively in the sector, it is anticipated to propel the titanium dioxide market in the coming years.

Global automotive market is anticipated to grow at a significant rate owing to the rising demand for passenger and private vehicles, introduction of electric vehicles to limit carbon emissions and rising economic growth. Paints and coatings are extensively used in the sector which is estimated to drive the titanium dioxide market during the forecast period. Further, rising investments in research and development of titanium dioxide to invent technology that helps in enhancing the end product performance is projected to result in a higher market growth in future.

Growth of Self-Cleaning Technologies across the World

Titanium dioxide is heavily used in applications such as self-cleaning concrete, polycarbonate substrate, self-cleaning fabric, anti-microbial coatings for hospitals & clinics and self-cleaning paints which are becoming increasingly popular. Hence, these factors are expected to drive the market growth during the forecast period.

Volatile Prices of the Raw Material

Titanium Dioxides is known to have carcinogenic properties due to which it is subject to stringent safety regulations by regulatory authorities across the world. Historically, the prices of titanium dioxide have undergone considerable fluctuation owing to variations in demand and supply which makes its prices extremely volatile. High cost associated with mining of titanium dioxide is estimated to adversely affect the market growth during the forecast period. 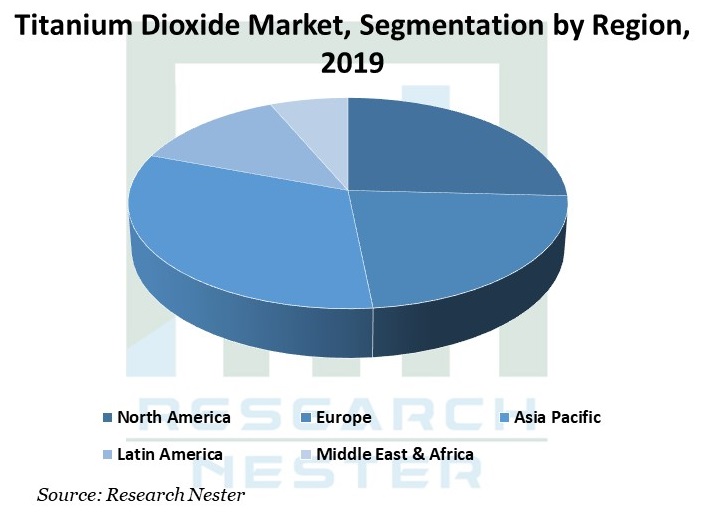 Our in-depth analysis of the titanium dioxide market includes the following segments:

On the basis of regional analysis, the global titanium dioxide market is segmented into five major regions including North America, Europe, Asia Pacific, Latin America and Middle East & Africa region. Among these regions, the market in Asia Pacific is anticipated to hold the largest market share on the back of high demand for various applications such as photo-electrode, plastics, paints, paper and pigment in developing countries in the region including India, China and Japan. Additionally, the market in this region is further expected to record the highest CAGR over the forecast period owing to increasing economic growth and rising population.

The global titanium dioxide market is further classified on the basis of regions as follows: