The global thoracic vascular stent grafts market is estimated to garner a notable revenue by the end of 2031 by growing at a CAGR of ~5% over the forecast period, i.e., 2022 – 2031. Further, the market generated a significant revenue in the year 2021. The growth of the market is primarily attributed to increasing prevalence of cardiovascular diseases, changing eating habits, and changing lifestyle. According to the data provided by the World Health Organization (WHO), every year, approximately 17.9 million individuals globally die from CVDs, accounting for 32% of all deaths. 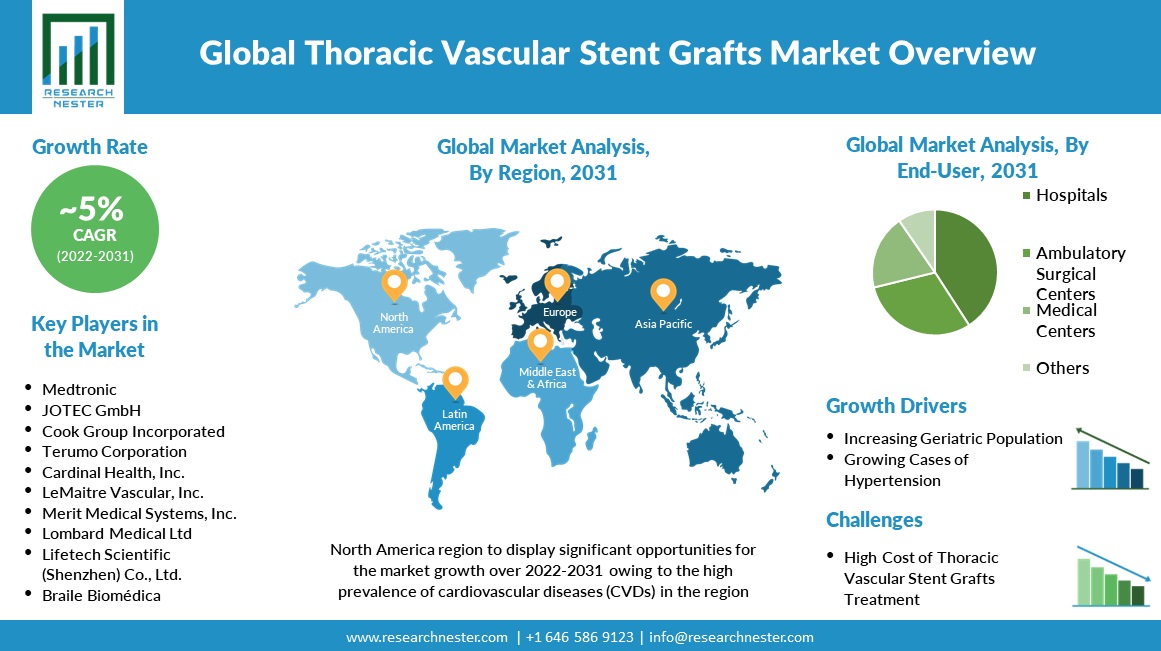 Thoracic vascular stent grafts are a surgical procedure used to repair thoracic vascular aneurysms. A thoracic aneurysm is a thickening in the main heart artery that increases the aorta's diameter by more than 151%. These grafts come into play when such condition causes rupturing or tearing and later internal bleeding. Instead of traditional surgery to repair an aortic aneurysm, this procedure is also implied to get optimum results. It is a minimally invasive surgery treatment option in the vascular stent grafts sector that is delivering promising results. Rising cases of aneurysm is one such factor which leads towards the increasing demand of thoracic vascular stent grafts over the forecast period. For instance, aortic aneurysm-related mortality is estimated to cause 160,000–232,000 deaths annually with a survival rate of less than 20%.

The global thoracic vascular stent grafts market is segmented and analyzed for demand and supply by end-user into hospitals, ambulatory surgical centers, medical centers, and others, out of which the hospitals segment is estimated to radically grow over the forecast period owing to the mounting number of patients visits to be diagnosed in hospitals, increasing incidences of CVDs, availability of better medical reimbursement, and globally increasing healthcare expenditure. As per the World Bank, global healthcare expenditure expanded to 9.83% in 2019 from 9.7% in 2018.

Regionally, the global thoracic vascular stent grafts market is studied into five major regions including North America, Europe, Asia Pacific, Latin America and Middle East & Africa region. Amongst these markets, the market in North America is projected to hold the largest market share by the end of 2031 backed by the rise in aged population, technological developments, and high prevalence of cardiovascular diseases (CVDs) in the region. According to the Centers for disease Control and Prevention, in the United States, heart disease accounted for the deaths of about 697,000 people in 2020. Besides this, nearly 20.1 million adults aged 20 and above are influenced by coronary artery disease.

The global thoracic vascular stent grafts market is further classified on the basis of region as follows:

What are the major factors driving the growth of the thoracic vascular stent grafts market?

Increasing geriatric population, growing cases of hypertension, increasing consumption of tobacco, and upsurge in fast food consumption are some major factors driving the growth of the market.

What would be the CAGR of thoracic vascular stent grafts market over the forecast period?

What are the challenges affecting the thoracic vascular stent grafts market growth?

Who are the major players dominating the thoracic vascular stent grafts market?

What are the segments in the thoracic vascular stent grafts market?