Neuromuscular blocking drugs cause paralysis of the affected skeletal muscles by blocking neuromuscular transmission at the neuromuscular junction. They are generally used as muscle relaxants which are used extensively during surgeries for mechanical ventilation and to prevent muscle movement. For clinical use, they are used after the patient is administered a pain killer. It acts on the post-synaptic acetylcholine receptors and paralyzes the targeted skeletal muscle. It plays an extremely vital role in successful execution of any surgical procedure. As more number of people are opting for surgical treatments due to their accuracy and reliability, the role of neuromuscular blocking drugs has become increasingly important.

Rising number of people across the world are opting for surgical treatments on account of increasing disposable incomes and proven accuracy of surgeries. Moreover, the usage of neuromuscular blocking drugs in surgeries is increasing. Owing to these factors, the market is expected to attain a significant CAGR during the forecast period i.e., 2020-2028. The market is segmented by distribution channel into hospital pharmacy, retail pharmacy, drug stores and e-commerce. The hospital pharmacy segment is anticipated to grow at the highest rate on account of accelerating number of clinical consultations in hospitals, increasing geriatric population, increasing investments by the government in healthcare in various countries and growing adoption of surgical treatments at hospitals to cure chronic diseases.

According to the United Nations Department of Economics and Social Affairs, there are currently 703 million people aged 65 or older, a number which is expected to grow to 1.5 billion by 2050.

Increasing life expectancies in different countries across the world has led to significant growth in the older populations. Countries such as Japan and China contain a higher number of the elderly population due to improved healthcare, political, economic and social conditions. Consequently, complexity of surgical treatment has increased along with the demand for neuromuscular blocking drugs. Owing to the rise in chronic diseases, the acceptance of surgical treatments by medical professionals has further increased. This is predicted to propel the demand for neurological blocking drugs and boost the market growth during the forecast period.CLICK TO DOWNLOAD SAMPLE REPORT

Increasing investment in neuromuscular blocking drugs research and development to invent sophisticated technology that helps in enhancing the drug performance would help drive the market growth during the forecast period. Safety of the consumer remains the first priority of both the drug makers and medical professionals. Upon development of new classes and combinations of drugs which would have minimum side effects, their safety and efficacy would be enhanced which is estimated to drive the market growth further. Neuromuscular blocking drugs market is anticipated to grow exponentially during the forecast period.

High Cost of Drug and Ill-Effects

High cost associated with the surgical treatment and neuromuscular blocking drugs is predicted to adversely affect the growth of the market over the forecast period. Some of the side effects of neuromuscular blocking drugs include dysrhythmia, muscle pain, hyperkalemia, cardiac arrest and prolonged paralysis among others. Hence, it is estimated to hamper the market growth during the forecast period. The stringent regulatory environment associated with the negative side effects of the drug are further predicted to hinder the market growth.

Our in-depth analysis of the neuromuscular blocking drugs market includes the following segments:

On the basis of regional analysis, the neuromuscular blocking drugs market is segmented into five major regions including North America, Europe, Asia Pacific, Latin America and Middle East & Africa. The market for North America is anticipated to hold the largest market share on the back of high geriatric population, increasing research and development initiatives by the government, increasing safety and efficacy of the drug and more number of people opting for surgical treatments. On the other hand, the market in Asia Pacific is anticipated to record the highest CAGR on the back of growing geriatric population, increasing investments in the healthcare sector and increasing research and development initiatives in the region. 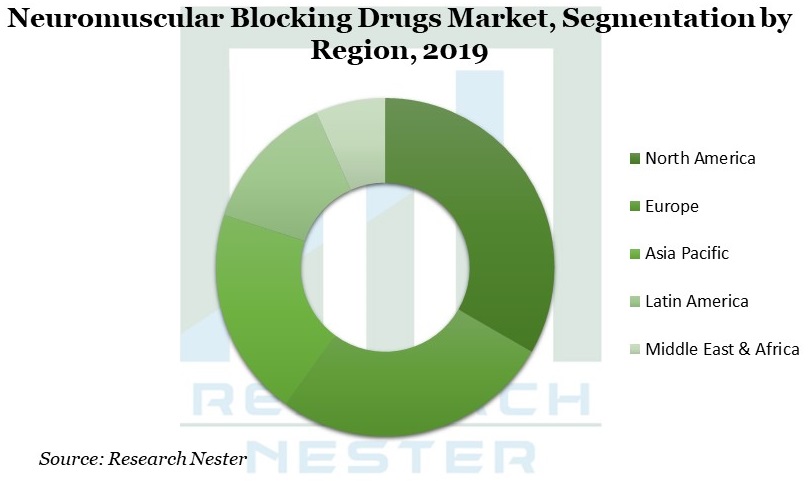 The global neuromuscular blocking drugs market is further classified on the basis of regions as follows: