The Middle East & Africa renewable energy-as-a-service market is estimated to grow with a CAGR of 10.54% during the forecast period, i.e., 2021-2028. The market which registered USD 1050.86 Million in the year 2019, is further projected to reach USD 1805.91 Million by the end of 2028. The growth of the market can be attributed to the rapidly increasing demand for low-carbon energy technologies, along with the decreasing cost of renewable power generation process. 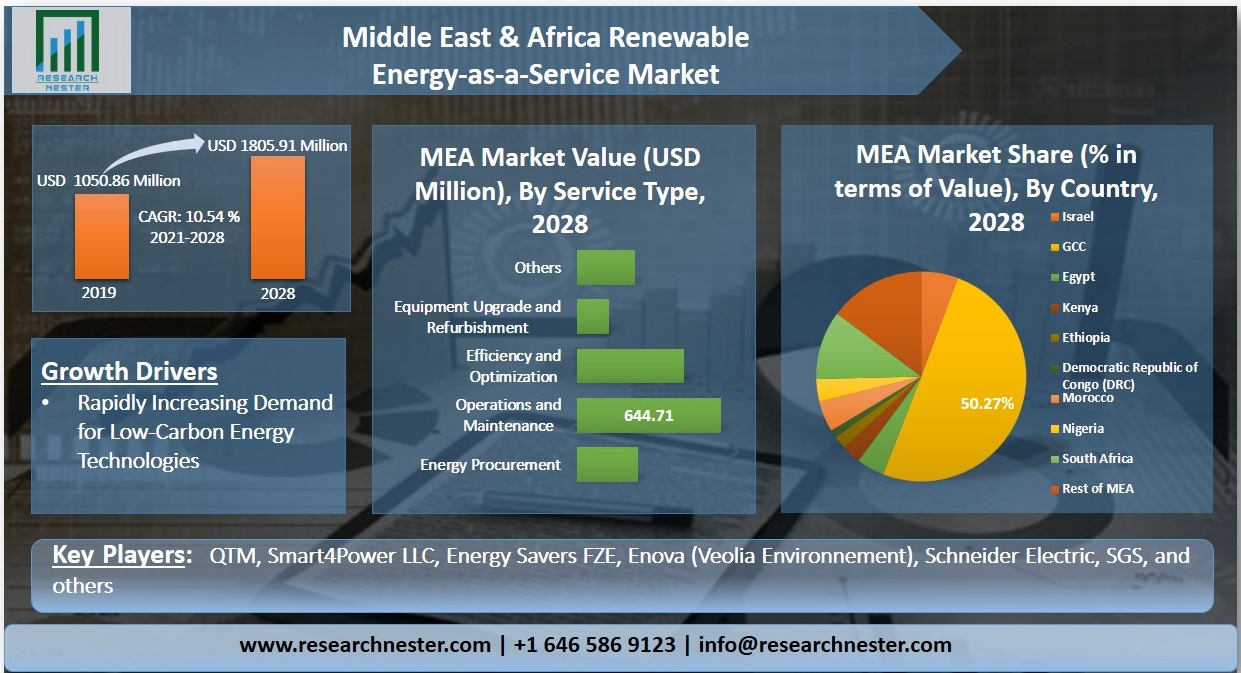 Renewable energy is used across various industries such as power generation, transportation, and for energy requirements in residential and commercials buildings. However, widespread deployment of such low carbon technologies is still limited in the region. The adoption of renewable energy-as-a-service model provides a feasible solution in such a scenario. Renewable energy-as-a-service model not only provides regular energy services to the consumer but also simultaneously saves the consumers from capital constraints such as high upfront technology and maintenance costs. In addition, changing consumer demands in tandem with the gradual shift in the power paradigm into a renewable energy-based decentralized and digitalized system has also led to the development of new energy solutions and services. According to the statistics by the International Renewable Energy Agency (IRENA), the total installed renewable energy capacity during the period 2017-2018 in the GCC nations was 867MW. CLICK TO DOWNLOAD SAMPLE REPORT 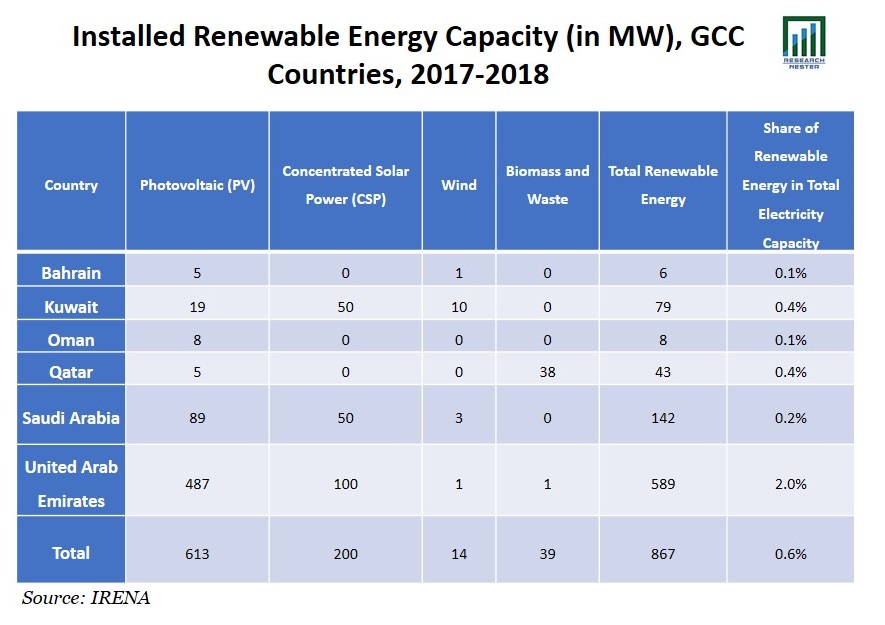 Geographically, the Middle East & Africa renewable energy-as-a-service market is segmented into Israel, GCC, Egypt, Kenya, Ethiopia, Democratic Republic of Congo, Morocco, Nigeria, South Africa, and Rest of MEA. Amongst these countries, the market in GCC is anticipated to hold the largest market share of 50.27% and is further projected to reach USD 907.76 Million by the end of 2028. The adoption of renewable energy has witnessed a significant increase in the GCC countries over the last decade. Technological innovations in tandem with the region’s sustainable energy targets are among the key factors, which have resulted in the increased adoption of renewable sources of energy in the region. The region has witnessed a significant growth in the utilization of renewables, which in turn, is expected to strengthen the region’s power supply in the upcoming years. In addition, growing focus towards increased adoption of renewable forms of energy coupled with the increasing demand for primary energy in the region is also projected to greatly improve the utilization of renewable energy-as-a-service model in the forthcoming years. Amongst the countries in GCC, the market in Saudi Arabia is anticipated to grow with the highest CAGR of 12.32% during the forecast period.

The Middle East & Africa renewable energy-as-a-service market is segmented on the basis of service type into energy procurement, operations & maintenance, efficiency & optimization, equipment upgrade & refurbishment, and others, out of which, the operations & maintenance segment is anticipated to hold the largest market share throughout the forecast period. The segment is further anticipated to record a market revenue of USD 644.71 Million by the end of 2028 and grow with a CAGR of 11.07% during the forecast period. The operations and maintenance services include continuous optimization of the operations in order to enhance the availability, efficiency, and output of renewable energy power plant and also increase the life of plant. A preventive and periodic maintenance services of the equipment ensures that the machinery operates efficiently, safely, and optimally in peak conditions. Some of the key O&M services include audit and analysis of complete O&M function, development and implementation of site-specific practices & procedures, integrated on-site services for O&M function, short-term O&M labor support, and others.

What are the major factors driving the growth of the Middle East & Africa Renewable Energy-as-a-Service market?

The rapidly increasing demand for low-carbon energy technologies, along with the decreasing cost of renewable power generation are some of the major factors anticipated to drive the market growth.

What would be the CAGR of Middle East & Africa Renewable Energy-as-a-Service market over the forecast period?

What are the challenges affecting the Middle East & Africa Renewable Energy-as-a-Service market growth?

The challenges related to integration and deployment of the service model is one of the major factors estimated to hamper the market growth.

Who are the major players dominating the Middle East & Africa Renewable Energy-as-a-Service market?

What are the segments in the Middle East & Africa renewable energy-as-a-service market?

The market is segmented by service type, end user, and by country.

Which segment captures the largest market size in the service type segment in the Middle East & Africa renewable energy-as-a-service market?

The operations & maintenance segment is anticipated to hold the largest market share over the forecast period and further record a market revenue of USD 644.71 Million by the end of 2028.