Metallic fibres, also known as synthetic fibres, are composed of metals, metals coated by plastics, or the core completely made up of metals. Metal fibres can be drawn from wires of larger diameters, shaved from thicker wire or grown around carbon seeds. Silver and gold were traditionally used in the textile industry for luxury clothing decoration purposes. The primary use of metal fibres lies in upholstery fabric and textiles such as lamé and brocade. Metal fibers are also used by consumers in weaving. Metal fibres can be knit, braided and woven into fashionable trims and fabrics. Metallic fibres are at times twisted with other variety of textiles such as nylon, wools, cotton and more to give a luxury finish to the produced yarns. Metal fibres are produced using two basic processes namely, laminating process and metalizing process. The laminating process involves the sealing of two layers of acetate or polyester film between a layer of aluminum whereas metalizing process involves heating the metal until it vaporizes then depositing at a high pressure onto the polyester film. The uses of metallic fibres are not just limited to textile industry. These fibers are also used in communication lines such as cable television lines and phone lines. The uses of metal fibres have further propelled in the recent past on account of their use in tire cord, space suits, missile nose cones and much more. The increasing uses of metal fibres in various end user industries are estimated to propel the market at a sturdy rate during the forecast period.

Metal Fibre Market is anticipated to record a CAGR of 4.3% over the forecast period. Many multi-national companies are dealing in new product advances using metal fibre. Moreover, the many advantageous properties of metal fibres are exploited in the field of aviation and electronic communication every now and then. New uses for metal fibres are discovered on regular basis which is expected to drive the metal fibre market rapidly.

Currently the global metal fibre market is observing vibrant growth owing to increasing demand of luxury carpets and textiles in the market. Advance in aerospace and aviation industry in the past few years and growing space explorations is projected to drive metal fibre market besides the wide range of functions of metal fibre in an immense range of products such as luxury carpets, military armors, airframe structures and electronic communications during the forecast period.

Asia Pacific is expected to drive demand and positively impact metal fibre market growth over the forecast period owing to increasing metal fibre application in textile industries on account of rising demand for luxury ethnic carpets across the region. Due to multiplying metal fibre uses in growing end-use industries such as textile, military, automotive industries, Asia Pacific is budding as a regional metal Fibre and its derivatives consumption market. CLICK TO DOWNLOAD SAMPLE REPORT 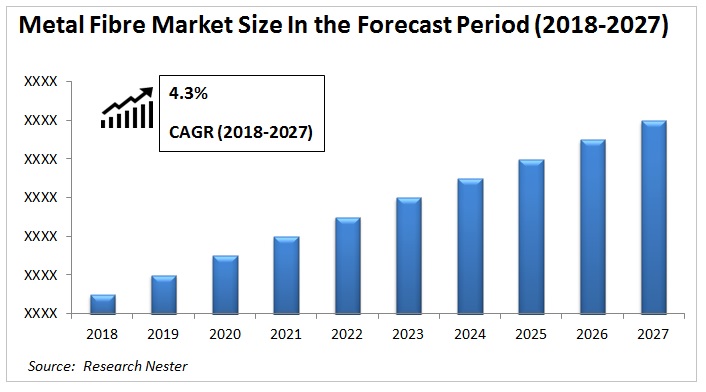 Global Metal Fibre Market is further classified on the basis of region as follows:

The rising demand for metal fibre in textile industries for luxury clothing and home interior decorations on account of rising disposable income of populations in developed as well as developing countries is estimated to increase the growth rate of metal fibers market over the forecast period. The increasing applications of metal fibres in automotive industry along with electronic communication industry, the metallic fibres market is anticipated to drive at a decent rate during the forecast period. Factors such as lightweight and strong tensile strength of these materials have resulted in an increased demand for metal fibres in aviation, automotive and arms industry in the recent past. Additionally, the good insulation properties of metal fibers call up for increased demand in electronic communication line paving as well. Moreover, the application of metal fibres in manufacturing of hybrid composites and cut resistant gloves and suits is expected to expand the market in heavy duty machine industries across the globe.

However, poor stability features in raw material costs and supply for metal fibres manufacturing is anticipated to restrain the metal fibres market during the forecast period.