The global industrial power system market is estimated to garner a large amount of revenue by growing at a CAGR of ~7% over the forecast period, i.e., 2022 – 2031. The growth of the market can be attributed largely to the growing demand for energy-efficient devices in the industrial sector around the world. Along with this, increasing need for power is escalating environmental concerns such as emission of greenhouse gases, air pollution and global warming. This is expected to raise the requirement for energy generation by techniques that minimize the exploitation of natural sources, which in turn is evaluated to raise the demand for industrial power systems in the forthcoming years. Furthermore, rising adoption of robotics and surging production of electric vehicles worldwide is projected to offer profitable opportunities to the market in the near future, as it is assessed to fuel the need for power supplies globally. According to the International Energy Agency, the sales of electric cars reached 2.1 million in 2019, accounting for about 2.6 percent of global car sales. The car stock for EVs also registered a 40 percent year-on-year increase in 2019. 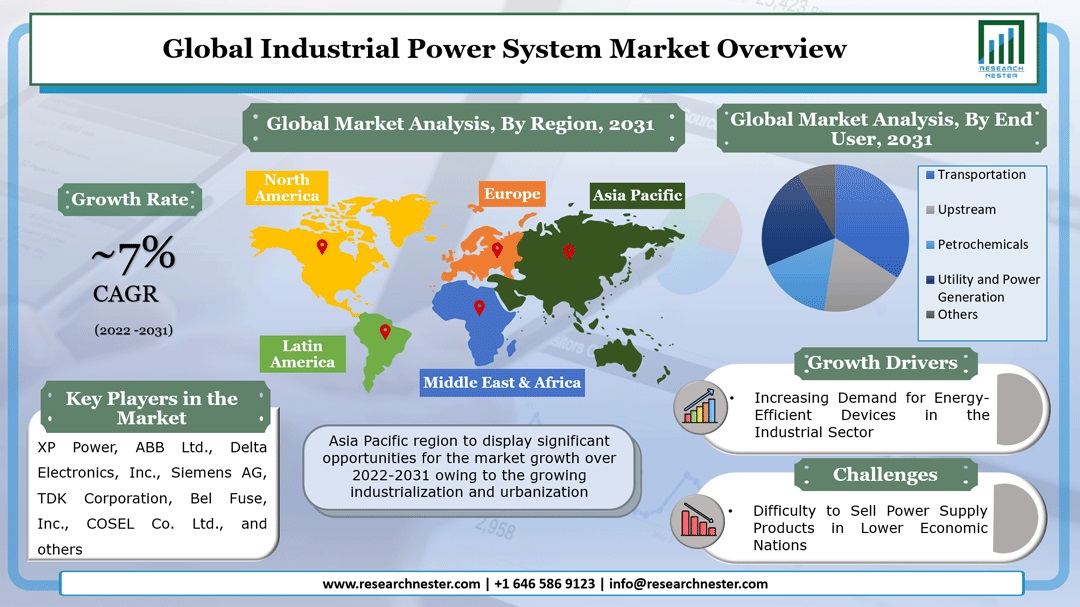 The market is segmented by end user into transportation, upstream, petrochemicals, utility and power generation, and others, out of which, the transportation segment is anticipated to hold the largest share in the global industrial power system market. This can be accounted to the growing number of government initiatives to support the adoption of electric vehicles, especially in the UK, China, Germany and France. Additionally, on the basis of type, the DC-DC convertors segment is predicted to occupy the largest share during the forecast period. This can be credited to the growing demand for DC power sources in various industrial applications across the globe, such as automotive, aeronautics and robotics, to fulfil the skyrocketing energy demand. CLICK TO DOWNLOAD SAMPLE REPORT 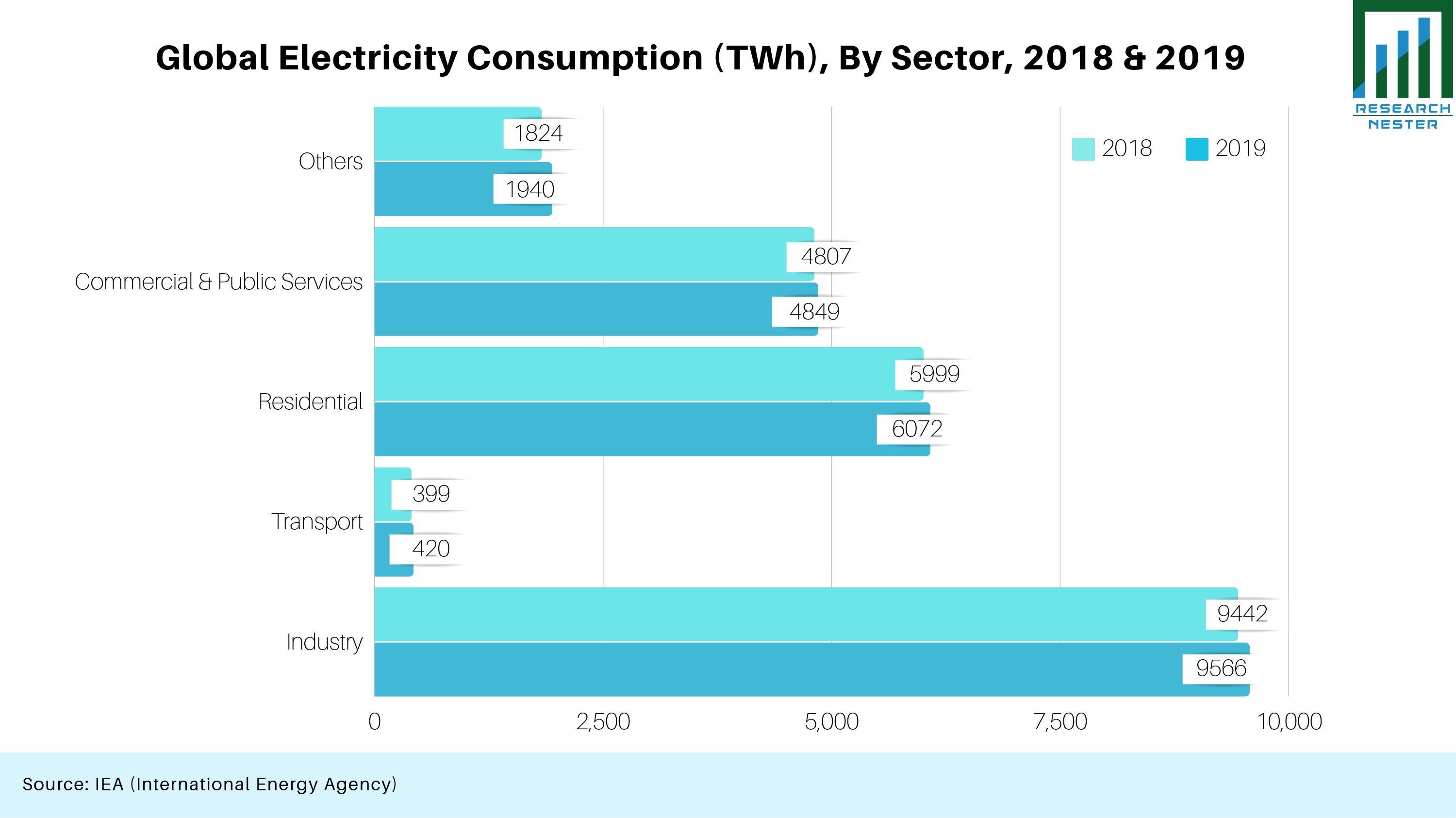 In 2019, the world’s total energy supply was 606EJ, wherein the highest share in terms of source was captured by oil, accounting for 30.9%, followed by coal (26.8%), natural gas (23.2%), biofuels and waste (9.4%), nuclear (5.0%), hydro (2.5%), and other (2.2%). Where there was an increase in energy demand in 2018, the year 2019 witnessed slow growth as the energy efficiency improved owing to decline in the demand for cooling and heating. However, in 2020, the electricity demand decreased by 1% due to the outbreak of Coronavirus resulting in government-imposed shutdowns in order to limit the spread of the virus, which was further followed by shutdown of numerous business operations impacting their growth. This also resulted in decline of 5.8% in the worldwide CO2 emissions which was recorded to be five times larger than the one recorded during the global financial crisis in 2009. However, in 2021, the demand for oil, gas and coal is estimated to witness growth, which is further projected to create opportunities for market growth. Moreover, rising environment degradation and awareness related to climate change is motivating many key players to employ sustainable energy strategies and invest significantly in environment-friendly power generation technologies with an aim to promote sustainable development among various nations around the world. Such factors are anticipated to promote the growth of the market in upcoming years.

Regionally, the global industrial power system market is segmented into five major regions including North America, Europe, Asia Pacific, Latin America and the Middle East & Africa region. The market in Asia Pacific is estimated to witness noteworthy growth over the forecast period on the back of the rapidly growing industrialization and urbanization, and expansion of the consumer electronics industry in the region. For instance, more than 77 percent of the total population of Malaysia lived in urban areas in 2020, up from about 76 percent in the year 2019. In addition, increasing number of government initiatives to raise the efficiency of industrial processes is also expected to bolster the market growth in the region in the coming years. Moreover, the market in North America is projected to grab the largest share during the forecast period ascribing to the growing demand for industrial power supply for delivering power to the rising electricity load, and strong presence of major market players in the region. 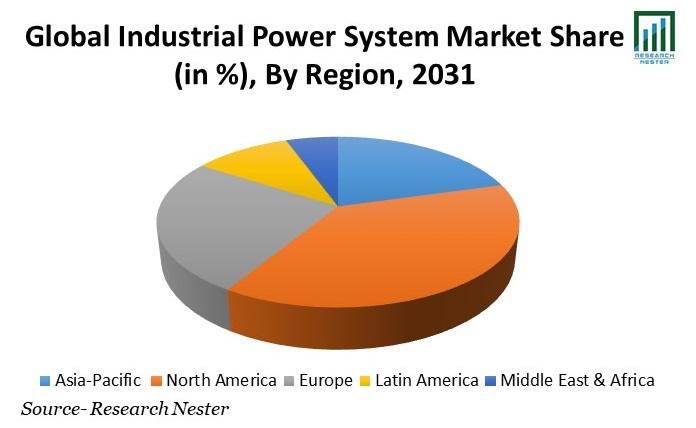 The global industrial power system market is further classified on the basis of region as follows:

What are the major factors driving the growth of the industrial power system market?

The major factors driving market growth are growing demand for energy-efficient devices in the industrial sector, and increasing need for power around the world.

What would be the CAGR of industrial power system market over the forecast period?

Who are the major players dominating the industrial power system market?

The major players in the market are XP Power, ABB Ltd., Delta Electronics, Inc., Siemens AG, TDK Corporation, and others.

What are the segments in the industrial power system market?

The market is segmented by type, technology, end user, and by region.

Which segment captures the largest market size in the end user segment in the industrial power system market?

The transportation segment is anticipated to hold largest market size and is estimated grow at a robust CAGR over the forecast period and display significant growth opportunities.

Which region will provide more business opportunities for growth of industrial power system market in future?

Asia Pacific will provide more business opportunities for market growth owing to the rapidly growing industrialization, and expansion of the consumer electronics in the region.