The global gas turbine market is estimated to garner significant revenue by growing at a ~5% CAGR over the forecast period, i.e., 2022–2030. The growth of the market can be attributed to the growing demand for electricity amongst the rising population, along with the rapid adoption of natural gas to produce electricity. Initially, major power plants were thermal, which means they were coal-based. However, this situation is changing on account of growing awareness regarding pollution and depleting fossil fuels, which is expected to increase the adoption of natural gas-based power plants, which use gas turbines to generate electricity. Moreover, the increasing demand for power in the commercial and industrial sector is also estimated to fuel the demand for natural gas-based electricity. Increasing consumption of natural gas amongst various sectors, including, power sector is estimated to further boost the market growth. According to the report by the IEA, the global natural gas consumption increased by 3.2% from 2020 to 2021. 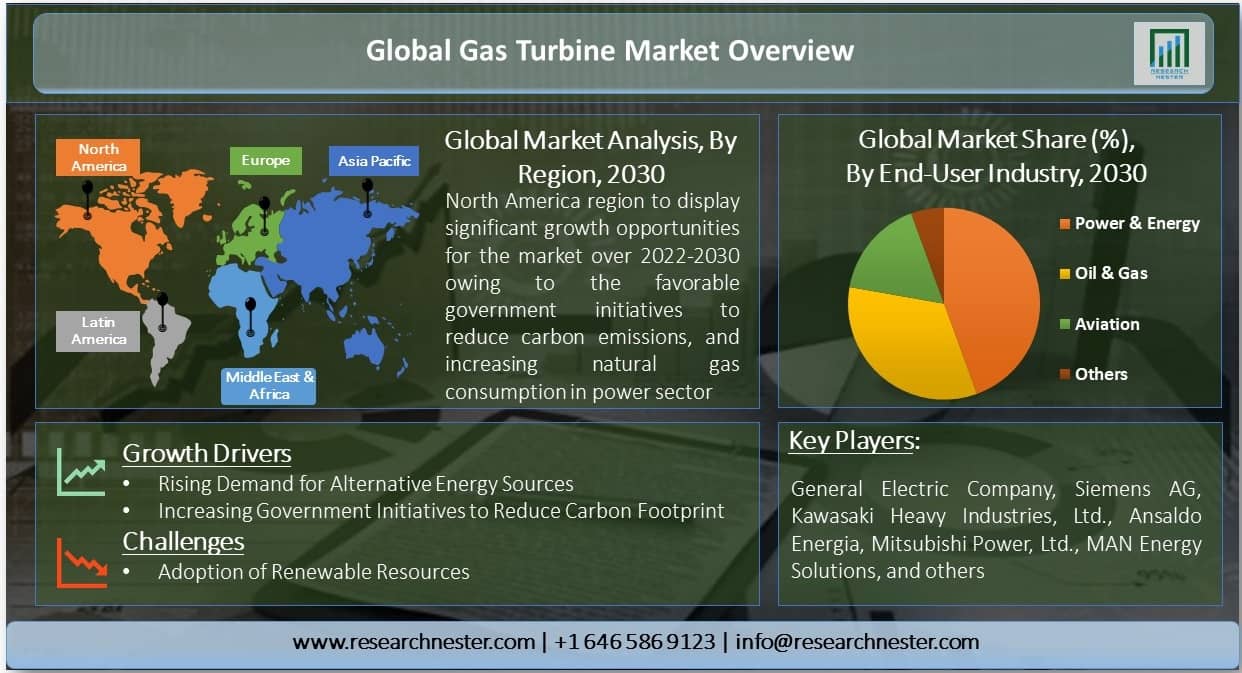 The global gas turbine market is segmented by capacity into less than 30 MW, 30-120 MW, 120-200 MW, and above 200 MW, out of which, the above 200 MW segment is anticipated to hold the largest share in the market during the forecast period owing to its high usage in power plants for electricity generation. On the basis of end-user industry, the market is segmented into energy & power, oil & gas, aviation, and others, out of which the energy & power segment is anticipated to garner the largest share over the forecast period on the back of increasing shift of power generation from coal to oil and gas in various developed countries. The aviation gas turbine segment, on the other hand, is expected to hold a significant market share, backed by the increasing aircraft shipments worldwide, and the rising demand for air travel amongst passengers.

Regionally, the global gas turbine market is segmented into five major regions including North America, Europe, Asia Pacific, Latin America and Middle East & Africa region. The market in North America region is estimated to garner largest share over the forecast period on the back of increasing adoption of natural gas as a source of electricity, backed by presence of oil wells in the countries, such as, Canada, and United States. Moreover, the government initiatives to reduce carbon emission is further anticipated to boost the market growth. According to the U.S. Energy Information Administration, in 2020, the power sector consumed about 38% of total U.S. natural gas, while the total consumption was 30.48 trillion cubic ton.

The market in the Asia Pacific region is estimated to witness highest CAGR over the forecast period owing to the increasing need for power backed by rapid industrial development, urbanization and increasing population in the region. Moreover, depleting coal resources and slow adoption of renewable resources for electricity generation in developing countries is also estimated to fuel the market growth. 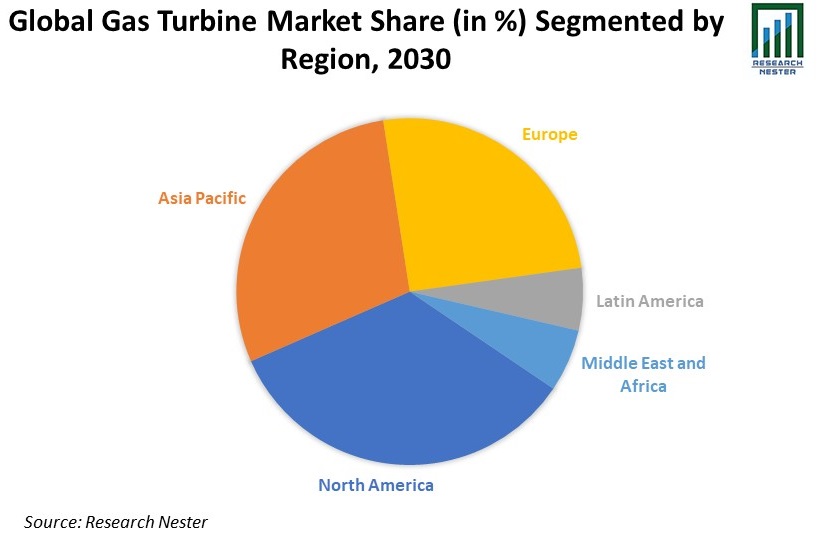 The global gas turbine market is further classified on the basis of region as follows:

Our in-depth analysis of the global gas turbine market includes the following segments:

The global gas turbine market is primarily dominated by General Electric Company, Siemens AG, Kawasaki Heavy Industries, Ltd., Ansaldo Energia, and Mitsubishi Power, Ltd., who collectively fulfill around 60% of the demand for gas turbines. However, few small-scale market players, such as, MAN Energy Solutions, are flourishing currently and are estimated to witness substantial growth in the coming years.

What are the major factors driving the growth of the gas turbine market?

Increasing government initiatives to reduce carbon emissions, and adoption of natural gas for electricity generation are the major factors driving the market growth.

What would be the CAGR of gas turbine market over the forecast period?

What are the challenges affecting the gas turbine market growth?

Adoption of renewable energy is one of the factors estimated to hamper the market growth.

Which region will provide more business opportunities for growth of gas turbine market in future?

The market in North America is estimated to garner the largest market share owing to the large number of oil and gas reserves in the region, along with increasing adoption of natural gas in power sector.

Who are the major players dominating the gas turbine market?

What are the segments in the gas turbine market?

The market is segmented by capacity, type, end-user industry, and by region.

Which sub-segment captures the largest market size in the end-user industry segment in the market?

The power & energy segment is anticipated to hold largest market share over the forecast period on the back of rapid shift of power generation from coal to natural gas.