Pneumococcal vaccine is used for the prevention of pneumococcal diseases, which consist of diseases caused by Streptococcus pneumoniae bacteria such as pneumonia, meningitis and sepsis. These diseases are common in young children as well as the geriatric population, in which case it is presents a great risk of serious ailment among them. As a result of this, the Centers for Disease Control and Prevention recommends vaccination for pneumococcal diseases to children younger than 2 years of age and adults older than 65 years of age.

Based on end user, the market is segmented into hospitals, clinics, ambulatory surgical centers and others. The hospitals segment is estimated to hold the largest share in the market which can be attributed to growing healthcare infrastructure with rising number of hospitals which is anticipated to increase the demand for preventive vaccine around the world. On the other hand, the clinical segment is anticipated to grow at the highest rate over the forecast period as a result of increasing number of specialized and disease-specific clinics which is estimated to contribute to internal competition for better service and thereby raise the demand for pneumococcal vaccine. CLICK TO DOWNLOAD FREE SAMPLE 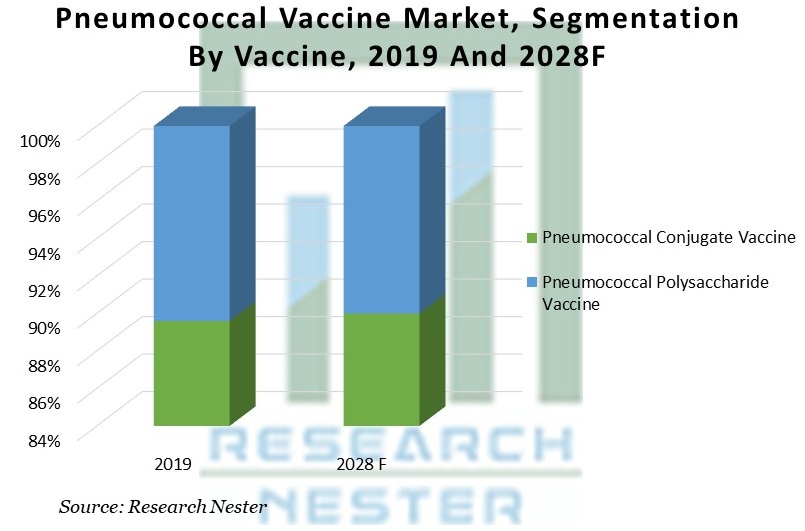 Currently, there are only two pneumococcal vaccines approved by the U.S. Food and Drug Administration (FDA), Prevnar 13 and Pneumovax 23. Prevnar 13 is a pneumococcal 13-valent conjugate vaccine developed and manufactured by Pfizer. It is majorly used in children between the ages of 6 weeks and 5 years for providing active immunization for prevention of diseases caused by the Streptococcus pneumoniae bacteria. Pfizer reported a revenue of USD 5,847 million globally from Prevnar 13 in 2019 and a worldwide revenue of USD 5,802 million in 2018. In 2019, the vaccine segment observed an operational growth of 12% internationally on account of growing use in children. The increased volumes of vaccine purchased by governments is anticipated to be a driving factor for the market growth. Moreover, the association with Gavi, the Vaccine Alliance is further predicted to bring about a rise in the sale volumes.

The Meningitis Vaccine Project, a partnership between the World Health Organization and PATH, is a promising meningitis vaccine discovery program which is anticipated to provide a great opportunity for larger market players to enter into the pneumococcal vaccines market. This is another significant factor estimated to contribute towards the market growth in the next few years.

Side Effects Associated with Pneumococcal Vaccines to Hinder the Market Growth

Various side effects are associated with the use of pneumococcal vaccine such as soreness, redness or swelling at the site of injection along with fatigue, headache, joint pain and fever is estimated to hamper the market growth. These side effects generally tend to be mild and the reactions get better within one or two days, however, serious reactions might occur at times which is predicted to decrease the adoption of the vaccine during the forecast period.

Our in-depth analysis of the pneumococcal vaccine market includes the following segments:

On the basis of regional analysis, the pneumococcal vaccine market is segmented into five major regions including North America, Europe, Asia Pacific, Latin America and Middle East & Africa region. Pneumococcal vaccine market is projected to hold the leading share in North America in the coming years on the back of growing demand for efficient disease prevention vaccine across the region. Additionally, advanced research and development in healthcare sector in Asia Pacific that leads to manufacture of advanced and cost-effective vaccine is anticipated to drive the market growth in the region during the forecast period. The adoption of advanced and high end vaccine in developing regions such as China, India and Japan is increasing and in order to gain a competitive edge, the medical equipment manufacturers in this region are coming up with newer vaccine to prevent pneumococcal disorders. 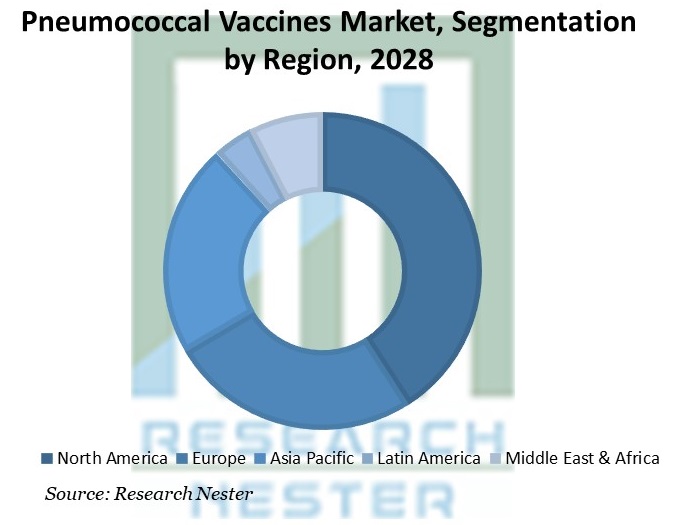 The pneumococcal vaccine market is further classified on the basis of region as follows: