Coal tar pitch (CTP) is an industrial product derived from the distillation of coal tar. Coal tar is referred to the thick dark liquid which is produced as a by-product during the production of coke and coal gas from coal. CTP is used primarily in the production of aluminium, graphite and other specialty chemicals. CTP is liquid in nature which predominantly contains a mixture of bi- and poly-condensed aromatic hydrocarbons. The tar is also known to have compounds with heteroatoms in rings and phenols. The typical physical properties of coal tar pitch are as follows: 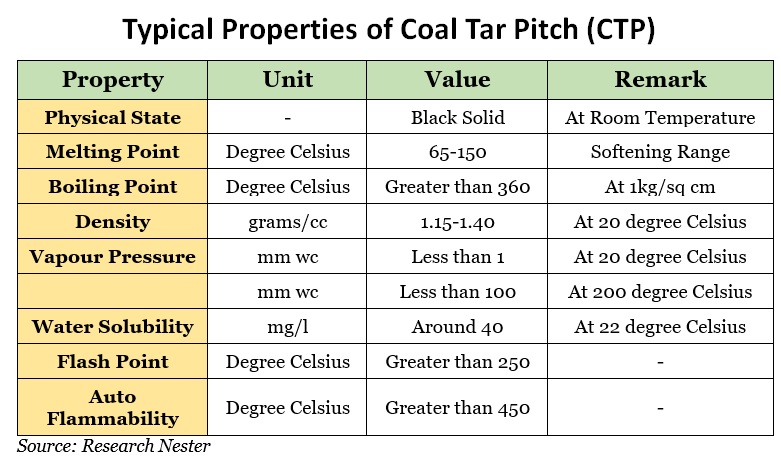 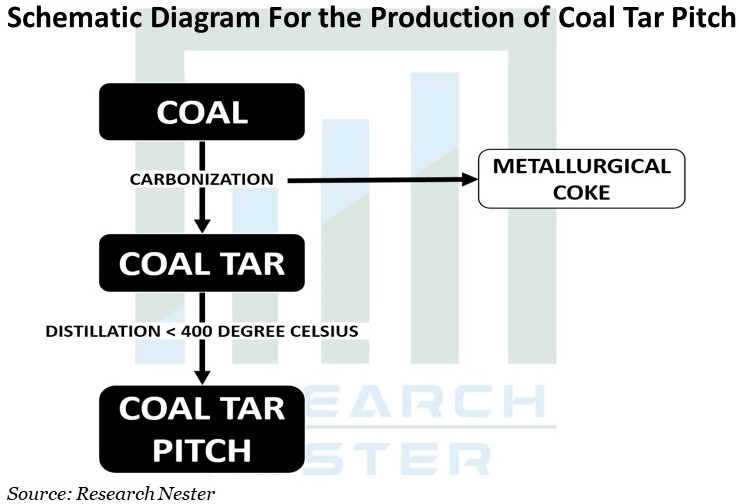 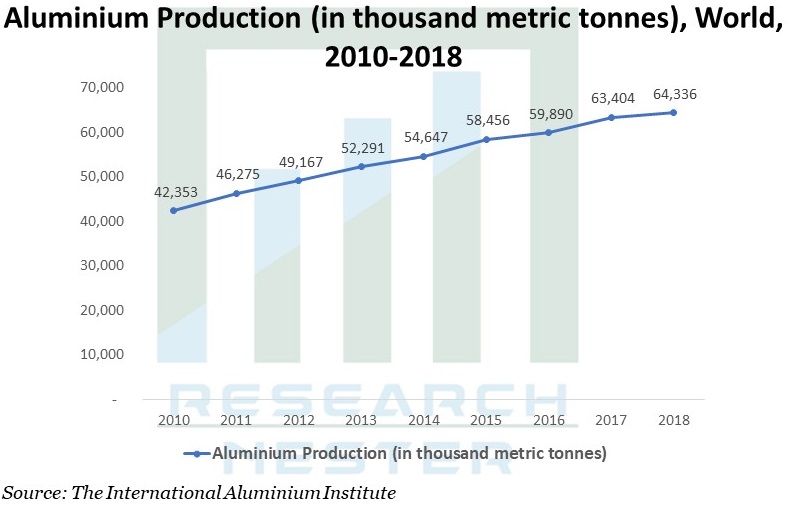 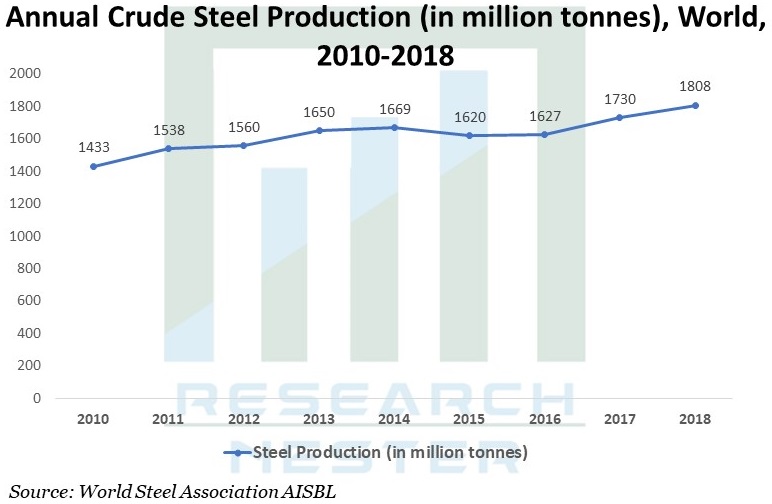 The global coal tar pitch (CTP) market is anticipated to record a CAGR of around 6% throughout the forecast period, i.e. 2020-2028. The market is segmented by grade type into aluminium, graphite and others, out of which, aluminium segment is anticipated to hold the largest market share on the back of growing aluminium industry, and thereby the increase in demand for carbon raw materials and products such as petroleum coke, coal tar pitch, anodes and cathodes amongst others. For the production of aluminium in the aluminium industry, merely 80% of coal tar pitch is being used. This can be attributed to factors such as economic feasibility and sustainability of CTPs as a binder over other alternative chemicals. 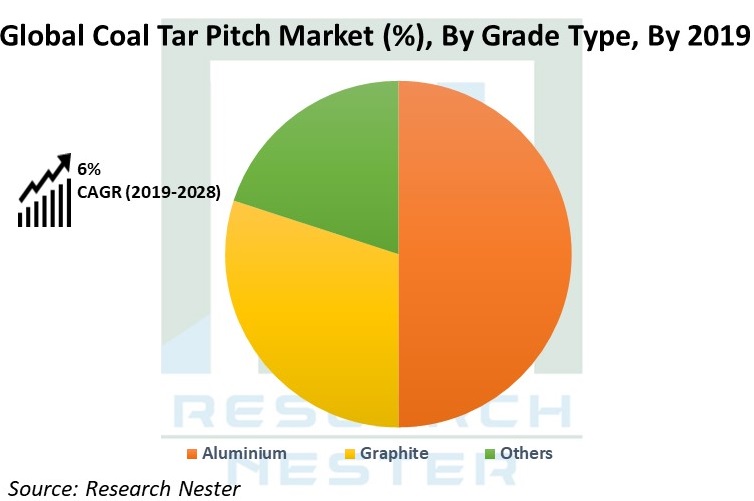 Rising Need for Aluminium from The Growing Automobile Industry 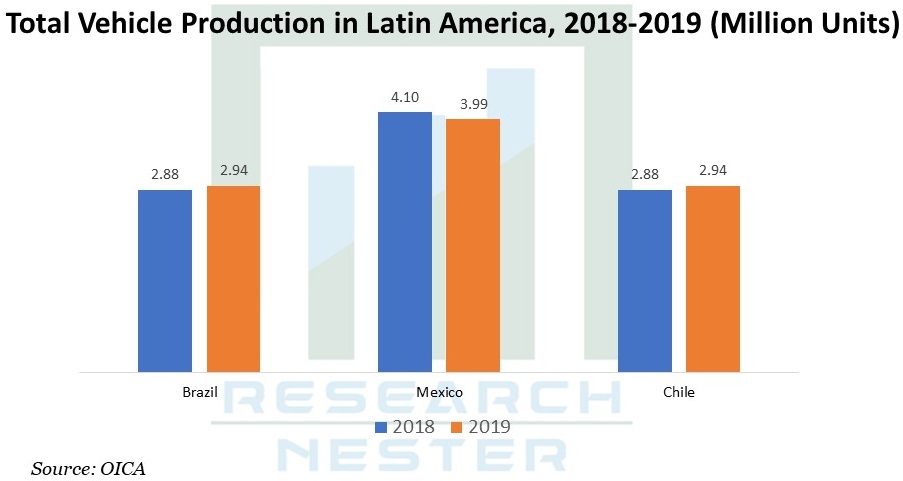 The demand for automobiles has seen an exponential growth over the years on the back of rising household disposable income along with the increasing need amongst individuals for various means of transport. But, over the years, owing to high vehicular emission, stringent norms have been developed by nations across the globe as a measure to reduce the pollution from vehicles on road. One such important measures taken by the government of nations worldwide is the reduction of the overall curb weight of the vehicle, for which, there is an upsurge in demand for lightweight metals, such as aluminium by the vehicle manufacturers. The steady growth observed in the automobile industry and the increasing production of automobiles around the world is thereby anticipated to drive the demand for aluminium, which in turn will require metal manufacturers to produce aluminium in greater quantity, thereby benefitting the growth of the global coal tar pitch market.

Growing Demand for CTP in the Paints and Coatings Industry

CTP is widely used as a base in the manufacturing of paints and coatings, the market of which is anticipated to grow at a CAGR of 5.3% over the forecast period 2019-2027. This can be attributed to the growing building and construction industry, followed by the expanding automotive and aerospace industry, where paints and coatings are used extensively. Such a factor is anticipated to drive the growth of the global CTP market.

Several nations around the world have imposed stringent norms to regulate the process of melting materials, for instance, furnaces that are used in the production of metals, such as steel. As such, manufacturers using furnaces worldwide have shifted to electric arc furnace (EAF), which uses graphite electrodes to melt the materials provided inside the furnace. Graphite electrodes are made by the utilization of a binder-grade coal tar pitch (CTP) and calcined needle coke, followed by impregnation-grade CTP. The upsurge in demand for graphite electrodes worldwide and the rising consumption of CTPs for the manufacturing of graphite electrodes is thereby anticipated to drive the growth of the global coal tar pitch (CTP) market in the upcoming years.

Rising concern amongst nations worldwide for the high emissions of greenhouse gases (GHGs) obtained during the process of manufacturing of CTP along with the health risks associated when exposed to CTP are some of the factors anticipated to hamper the growth of the global coal tar pitch market. Moreover, increasing research for secondary aluminium, which doesn’t require the utilization of coal tar pitch, might impact negatively towards the consumption of CTPs. Such a factor is also anticipated to act as a key restraint factor towards the growth of the global CTG market in the upcoming years.

Asia Pacific is anticipated to hold the largest market share on the back of increasing demand for primary aluminium in the region from end user industries, such as automotive, aerospace, building and construction and several others, along with the presence of several nations in the region, such as China, India and Japan, which are known to be the major steel producers in the world. Additionally, increasing expenditure by the government of the nations in the region to promote the construction of several architectural structures, is raising the demand for greater consumption of steel and aluminium, which is anticipated to further drive the growth of the coal tar pitch (CTP) market in the upcoming years in the region. According to the statistics by the World Steel Association AISBL, China, India and Japan took the top three positions respectively for the production of steel in the year 2018. The three nations produced 928.3, 106.5 and 104.3 million tonnes of crude steel respectively.

The global coal tar pitch (CTP) market is further classified on the basis of region as follows: