The global cerebral infraction drugs market is estimated to grow at ~7% CAGR over the forecast period, i.e., 2022 – 2030. Cerebral Infraction, also known as stroke, occurs when the supply of blood is disrupted in brain, due to rupture of blood vessels or clotting in the vessels. The growth of the market can be attributed to the unhealthy lifestyle which causes cerebral infarction, such as, stress, unhealthy eating, lack of physical activity, and smoking. Increasing patient pool of hypertension, diabetes, and obesity, is the primary growth driver for the market growth. According in a report by World Health Organization (WHO), 1.13 billion people suffer from hypertension worldwide. Additionally, in 2019, over 1.5 million deaths were caused by diabetes. The scope for R&D activities for developing novel drugs is estimated to further boost the market growth. Moreover, growing healthcare facilities and a rising number of hospitals along with increasing investment in the healthcare sector is also anticipated to fuel the market growth. The growing prevalence of cerebrovascular diseases, such as, ischemic stroke, is also a major growth driver for the market. According to the data by the Center of Disease Control and Prevention (CDC), around 87% of all strokes are ischemic strokes, in which the blood flow to the brain gets blocked. 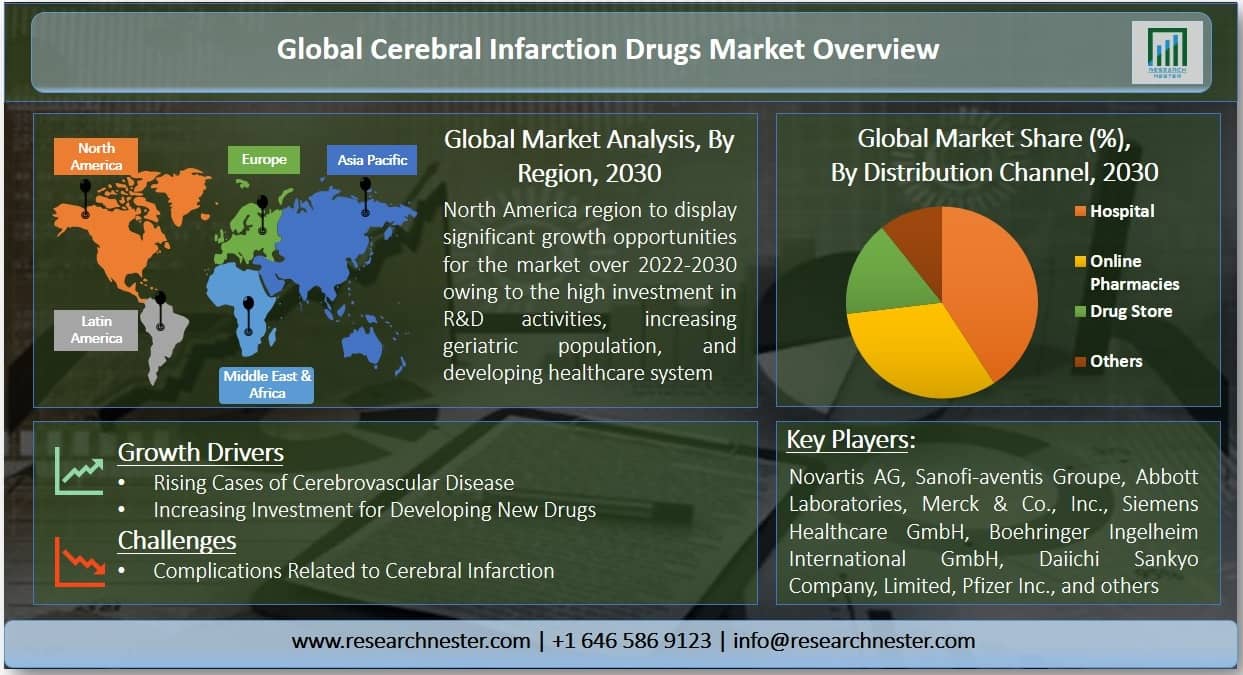 On the basis of geographical analysis, the global cerebral infraction drugs market is segmented into five major regions including North America, Europe, Asia Pacific, Latin America and Middle East & Africa region. The market in North America region is estimated to witness highest growth over the forecast period on the back of high obesity and hypertension rate in the population of United States and Canada. Moreover, high healthcare expenditure in the region, is further estimated to boost the market growth. According to a report by the World Health Organization (WHO), as of 2018, the per capita healthcare expenditure of North America valued USD 10,050.279.

The market in the Asia Pacific region is estimated to witness highest CAGR over the forecast period, owing to increasing geriatric population, and advancing healthcare system. According to the data by the World Bank, the population above 65 years of age in India crossed 90,719,952 in 2020, while, it crossed 167,808,567 in China. Moreover, rising healthcare expenditure and investment in R&D activities is estimated to boost the market growth. 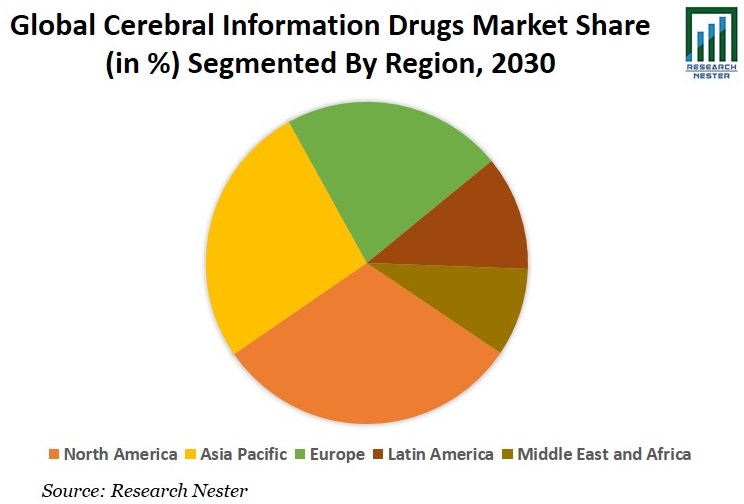 The global cerebral infraction drugs market is further classified on the basis of region as follows:

What are the major factors driving the growth of the cerebral infarction drugs market?

Growing prevalence of stroke, and other cerebrovascular disease along with increasing investment in developing new drugs to boost the market growth.

What would be the CAGR of cerebral infarction drugs market over the forecast period?

What are the challenges affecting the cerebral infarction drugs market growth?

Complications related to stroke are estimated to hamper the market growth.

Which region will provide more business opportunities for growth of cerebral infarction drugs market in future?

The market in the Asia Pacific is estimated to provide most business opportunities owing to the increasing geriatric population, and developing healthcare system.

Who are the major players dominating the cerebral infarction drugs market?

What are the segments in the cerebral infraction drugs market?

The market is segmented by diagnosis, drug class, distribution channel, and by region.

The hospital segment is anticipated to hold largest market size over the forecast period and display significant growth opportunities owing to the growing patient pool in hospitals.