The global water treatment chemicals market is estimated to garner a sizeable revenue by growing at a CAGR of ~5% over the forecast period, i.e., 2022 – 2030. The growth of the market can be attributed to the growing demand for chemically treated water from several end user industries such as power, oil & gas, chemical manufacturing and others. Along with these, increasing adoption of saline water treatment in order to fulfil the rising water demand, and significant decrease in the number of freshwater resources are also expected to accelerate market growth in the forthcoming years. According to UNICEF, 4 billion people worldwide experience severe water scarcity for at least one month each year. Also, 700 people in the world could be displaced by intense water scarcity by 2030. Furthermore, escalating population coupled with rapid urbanization in developing countries is projected to offer profitable opportunities to the market in the near future. In addition, surge in the development of centralized facilities for fluid treatment is also evaluated to expand the market. 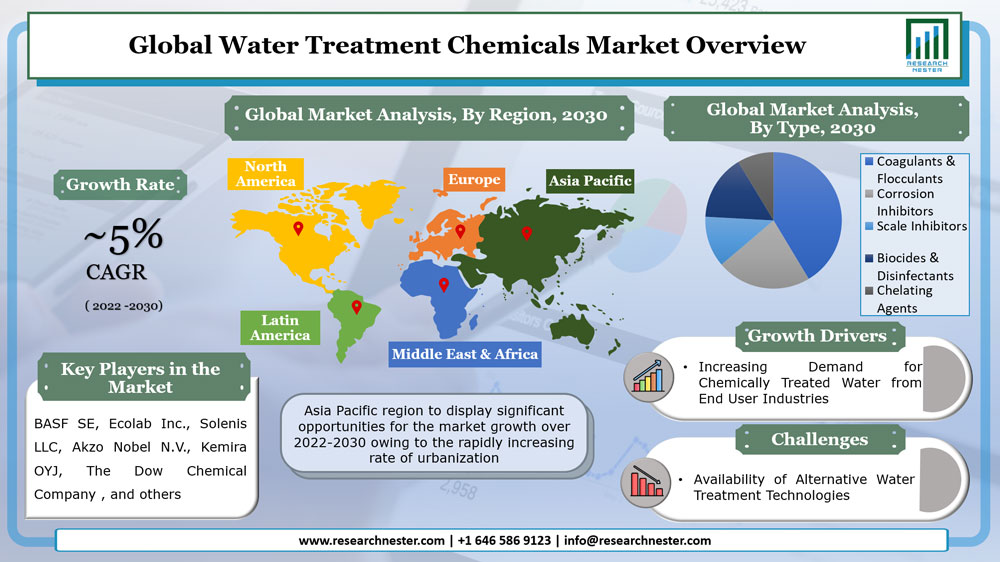 The market is segmented by end user into oil & gas, power, municipal, pulp & paper, chemical manufacturing, and others, out of which, the municipal segment is anticipated to hold the largest share in the global water treatment chemicals market. This can be accounted to the high use of chemicals for treating industrial and municipal wastewater, and increasing water scarcity in several parts of the world. Apart from these, the power segment is also predicted to grab a significant share during the forecast period owing to the high requirement for water for day-to-day operations in an electric power generation plant. Additionally, on the basis of type, the coagulants & flocculants segment is assessed to acquire the largest share by the end of 2030 ascribed to the rising usage of coagulants & flocculants in the tank of chemical products of oil & gas plants.

On the basis of geographical analysis, the global water treatment chemicals market is segmented into five major regions including North America, Europe, Asia Pacific, Latin America and the Middle East & Africa region. The market in the Asia Pacific is estimated to acquire the largest share and witness noteworthy growth over the forecast period on the back of the rapidly growing urbanization, which is expected to boost the growth of end user industries of the product in the region including chemical, power and oil & gas. As per the United Nations, the levels of urbanization in Asia were approximately 50 percent in 2018. It is calculated that by 2050, India and China will be homes to 416 million and 55 million urban dwellers respectively. In addition, growing demand for heavy metals, which in turn is projected to lead to the upsurge in the requirement for pretreated water is also anticipated to drive market growth in the coming years. Moreover, the market in North America is also predicted to occupy a notable share during the forecast period, which can be credited to the rising penetration of water treatment facilities in upstream oil & gas sector, and soaring water scarcity in the region. 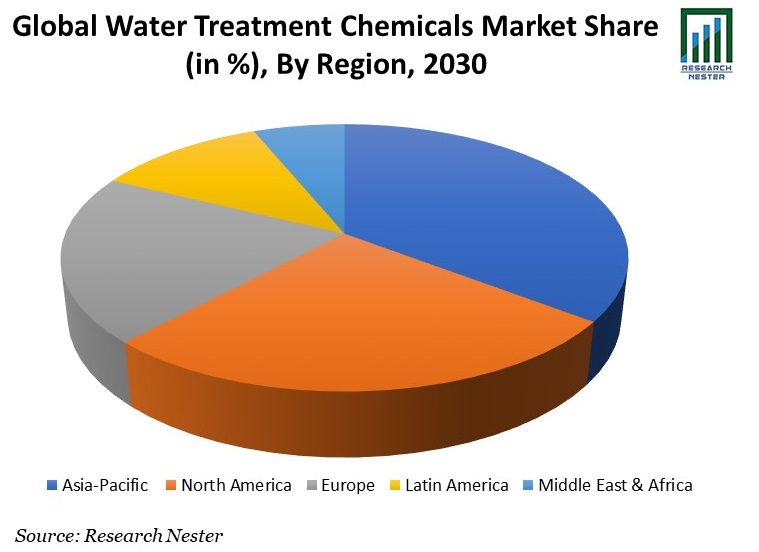 The global water treatment chemicals market is further classified on the basis of region as follows:

What are the major factors driving the growth of the water treatment chemicals market?

What would be the CAGR of water treatment chemicals market over the forecast period?

What are the challenges affecting the water treatment chemicals market growth?

Availability of alternative water treatment technologies is estimated to hamper the market growth.

Which region will provide more business opportunities for growth of water treatment chemicals market in future?

Asia Pacific will provide more business opportunities for market growth owing to the rapidly growing urbanization, which is expected to boost the growth of chemical, power and oil & gas industries in the region.

Who are the major players dominating the water treatment chemicals market?

The major players in the market are BASF SE, Ecolab Inc., Solenis LLC, Akzo Nobel N.V., Kemira OYJ, and others.

What are the segments in the water treatment chemicals market?

Which segment captures the largest market size in the end user segment in the water treatment chemicals market?

The municipal segment is anticipated to hold largest market size and is estimated to grow at a steady CAGR over the forecast period and display significant growth opportunities.