The global V2X cybersecurity market is estimated to garner a sizeable revenue and grow at a CAGR of ~33% over the forecast period, i.e., 2022 – 2030. The growth of the market can be attributed to the increasing amount of data generated by vehicles, and rise in the number of cyberattacks around the world. The total number of malware infections rose up to 812.6 million in 2018, up from 702 million and 580.4 million since 2017 and 2016 respectively. Along with these, growing dependency on internet, and rapid development of autonomous vehicles by prominent automobile manufacturers are also crucial factors expected to boost market growth in the forthcoming years. Furthermore, connected and autonomous vehicles rely on sophisticated V2X technologies and systems for collecting and sharing real-time data. As these vehicles are gaining momentum since the last few years, OEMs and other stakeholders are collaborating for revolutionizing the traditional way of driving, which in turn is projected to offer profitable opportunities to the market in the near future. 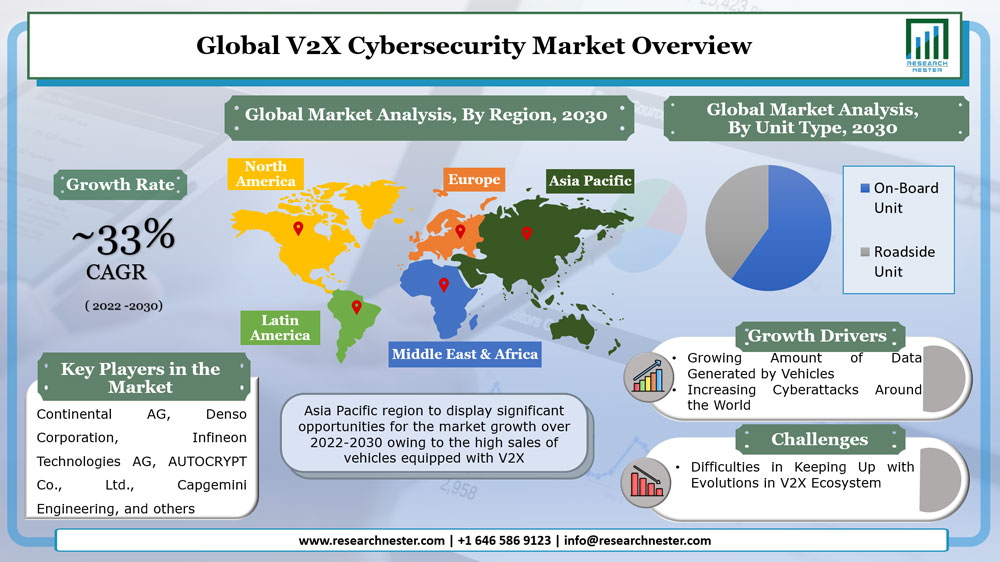 The market is segmented by unit type into on-board unit, and roadside unit, out of which, the on-board unit segment is anticipated to hold the largest share in the global V2X cybersecurity market on account of the fact that a vehicle requires OBU for all types of V2X communications. In addition, an on-board unit has control over several security features in the vehicle, making the security provided by these units highly significant, which is also predicted to drive the market segment’s growth in the future. Moreover, on the basis of vehicle type, the passenger cars segment is projected to grab the largest share during the forecast period, which can be credited to the surge in demand for connected car technologies in passenger cars, and increase in the number of electric vehicles and autonomous cars around the world. CLICK TO DOWNLOAD SAMPLE REPORT

On the basis of geographical analysis, the global V2X cybersecurity market is segmented into five major regions including North America, Europe, Asia Pacific, Latin America and the Middle East & Africa region. The market in the Asia Pacific region is estimated to gather the largest share and witness noteworthy growth over the forecast period on the back of the high sales of V2X equipped vehicles, and growing demand for cybersecurity solutions in the region. Apart from these, strong presence of major market players is also predicted to drive APAC’s market growth in the future. Additionally, the market in North America is also assessed to grab a notable market share during the forecast period ascribing to the rise in sales of connected vehicles, and high emphasis on developing innovative artificial intelligence solutions in the region. In 2017, more than 45 percent of Americans used digital assistants to interact with their smartphones, whereas around 8 percent of them used it on a standalone device. 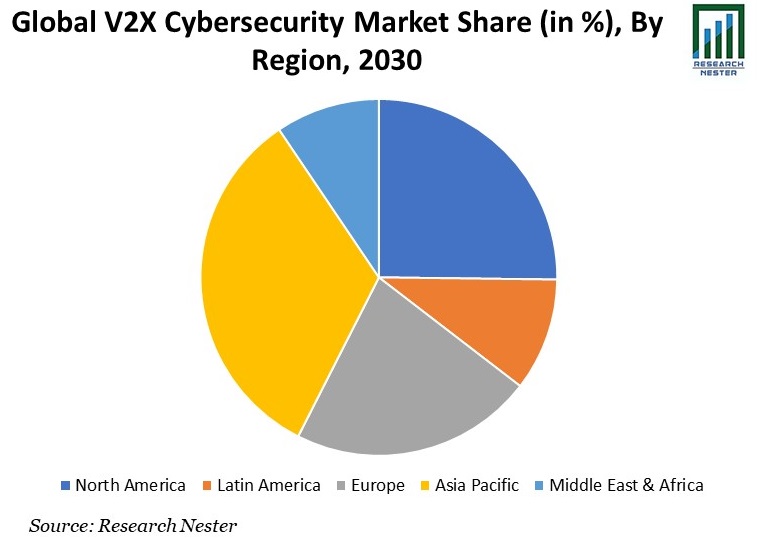 The global V2X cybersecurity market is further classified on the basis of region as follows:

Our in-depth analysis of the global V2X cybersecurity market includes the following segments:

What are the major factors driving the growth of the V2X cybersecurity market?

The major factors driving market growth are increasing amount of data generated by vehicles and rising number of cyberattacks around the world.

What would be the CAGR of V2X cybersecurity market over the forecast period?

What are the challenges affecting the V2X cybersecurity market growth?

Difficulty in keeping up with continuous evolutions in V2X ecosystem is estimated to hamper the market growth.

Which region will provide more business opportunities for growth of V2X cybersecurity market in future?

Asia Pacific will provide more business opportunities for market growth owing to the high sales of V2X equipped vehicles, and growing demand for cybersecurity solutions in the region.

Who are the major players dominating the V2X cybersecurity market?

What are the segments in the V2X cybersecurity market?

The market is segmented by communication type, unit type, security type, vehicle type, and by region.

Which segment captures the largest market size in the unit type segment in the V2X cybersecurity market?

The on-board unit segment is anticipated to hold largest market size and is estimated to grow at a notable CAGR over the forecast period and display significant growth opportunities.