The concept of car controls, especially with growing technological advancements playing an important role in every sector, is undergoing changes in terms of operation and maintenance. The concept of pedals that was being applied for controlling the movement of our vehicles earlier is now being slowly replaced by wires. The steering system has always been one of the most important parts that controls the direction of a vehicle, be it a bicycle, car, bike, bus or a truck by turning the wheels. While the steering wheel has passed through many stages of advancements over time, it is normally that part of a vehicle that the driver is involved with, in order to guide it towards a specific direction, to enable it to follow a specified course of the driver’s choice. The driver would be able to handle and exercise control over the vehicle, by discharging various functions using the steering wheel such as controlling speed and moving tactically and skillfully.

The automotive steering system, being an important component controls and regulates the movement of vehicles. It contains several components, joints and other linkages that transfers power from the engine to wheels. The smart automotive steering system is primarily designed to ensure that road accidents such as vehicle collisions and other hurdles and traffic obstruction are kept at a minimum, as human errors that can cause such accidents cannot be ruled out. The capability of the steering wheel to skillfully steer the vehicle during emergency situations is one of the vital features of the smart automotive steering system. This technology is primarily being utilized for discovering any form of objects while the vehicle is being driven and steering vehicle will be controlled in such a way so as to avoid any kind of collision.

The growth of the smart automotive steering system market is driven by various factors. For instance, the sensors are capable of measuring the position as well as pressure that can alert the driver, steer the vehicle to a safe zone or even send alerts to the concerned authorities during emergencies. Besides, a camera is placed in the centre that monitors the facial expressions of the driver and alerts the driver by a vibration occurring in the steering wheel that already has a vibrating alarm motor when any unusual problem is observed, such as the driver dozing off while driving and so on are some of the major features of the smart automotive steering system. Many road accidents that claim lives of individuals have taken place, owing to exhaustion and tiredness occurring in individuals while driving. According to a study by National Highway Traffic Safety Administration, it estimates that at least 6000 fatal accidents may be caused by drivers who are exhausted and drowsy.

The smart automotive steering system market is anticipated to grow at a moderate CAGR over the forecast period i.e. 2020-2027. The market is segmented by technology into Radio Detection and Ranging (RADAR) and Light Imaging Detection and Ranging (LiDAR), out of which RADAR segment is estimated to occupy the leading market share, owing to its high resolution at 24 and 77 GHz and its dependability under different weather conditions such as rain or snow while driving. 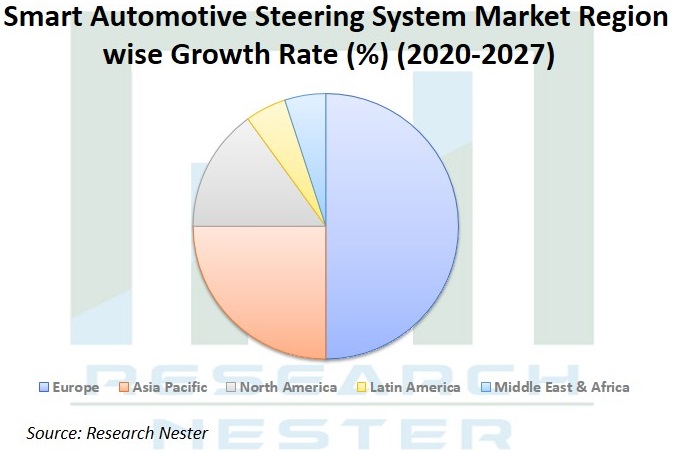 There has been a steady rise in the urban population crowding up the cities of the world, coupled with their rise in personal incomes. According to a United Nations release in 2018, 68% of the world’s population are projected to live in urban areas by 2050. The standard of living of the general population has risen and better access to basic amenities are being obtained. The population in urban areas are seeing a good rise in their personal incomes as compared to the population in the rural areas, owing to the industrialization and services sector performing well and growing rapidly, on account of various forms of technological innovations introduced into the market through various products and services globally. This is anticipated to raise the demand for smart automotive steering systems among the global population and is expected to drive the growth of the market over the forecast period.

Increasing Demand For Safety And Comfort From Consumers

With the global population rising and the cities becoming densely populated, there has been an increased demand for safety and precautionary measures from the global population, as driving has become even more complex and tough in urban areas. According to Population Reference Bureau (PRB), road traffic accidents have been the leading cause of deaths by injury and the tenth leading cause of all deaths globally. The World Health Organization has reportedly estimated about 1.35 million people dying due to road traffic deaths every year globally. In its status report on road safety, WHO has stated that road traffic injuries are the leading cause of death for children and young adults aged 5-29 years. In view of this alarming trend, it is estimated that there would be a higher demand for adoption of smart automotive steering systems among the global population which is estimated to drive the growth of the market over the forecast period.

Smart automotive steering systems, despite their numerous capabilities to bring about changes in the way the vehicles will be driven do suffer from certain limitations being the fact that the manufacturers would still have to deal with the challenges of interacting with traditional cars. Moreover, the costs associated with these smart automotive steering systems are expensive and there is still some concern over hackers who might be able to gain access to systems which could discourage the consumer acceptance of these vehicles.

On the basis of regional analysis, the smart automotive steering system market is segmented into five major regions including North America, Europe, Asia Pacific, Latin America and Middle East & Africa region. The market in Europe is anticipated to register the highest market share, owing to the increasing preference of consumers towards adoption of advanced technologies in vehicles. The market in Asia Pacific is predicted to gain a considerable market share, owing to their capacity to produce a significant number of vehicles and the attraction of a significant portion of population towards smart automotive steering technology which is considered to protect and safeguard the life of the users, owing to the facility of in-built sensors that help to alert the user and also help to move the vehicle to a safer location thereby protecting the vehicle from damage or collision.

The smart automotive steering system market is further classified on the basis of region as follows: