The global trench fever treatment market is estimated to garner a substantial revenue and grow at a robust CAGR over the forecast period, i.e., 2022 – 2030. The growth of the market can be attributed largely to the rising outbreaks of trench fever across the globe, and increasing number of patients of infections caused by bacteria. According to the data provided by the Centers for Disease Control and Prevention (CDC) in 2019, antibiotic resistant fungi and bacteria cause more than 2.8 million infections and about 35,000 deaths in the United States every year. In addition, trench fever is most common in populations living in shelters who either have no access to clean clothes or abuse alcohol. Thus, presence of environments with unsanitary conditions is also a crucial factor expected to accelerate the growth of the market in the near future. Furthermore, growing venture funding and allocation of large budgets by government in the healthcare sector is projected to offer lucrative opportunities to the market in the upcoming years. 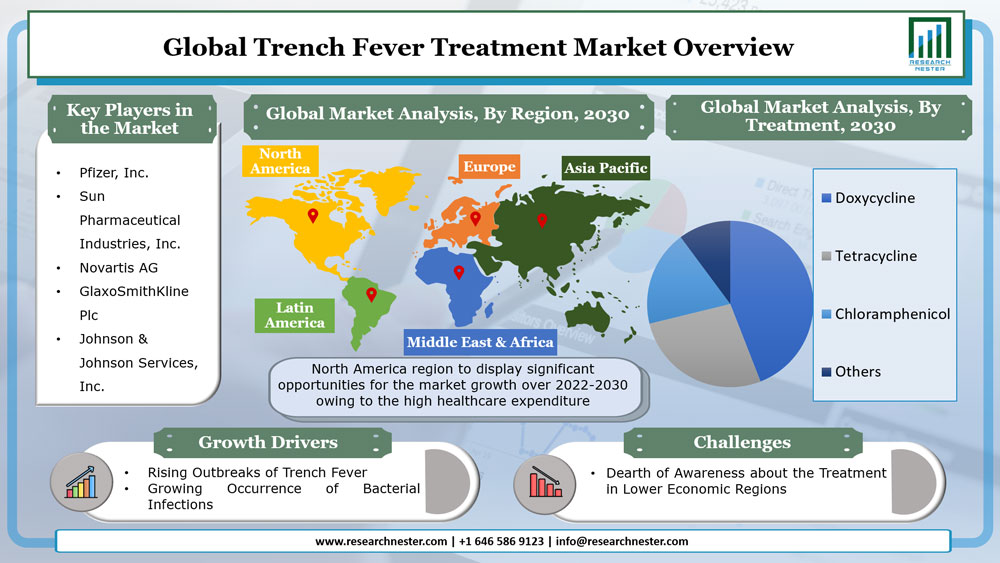 The market is segmented by treatment into doxycycline, tetracycline, chloramphenicol, and others, out of which, the doxycycline segment is anticipated to hold the largest share in the global trench fever treatment market. This can be accounted to the efficiency of doxycycline in treating infections by preventing the spread and growth of bacteria. Apart from this, the ability of this drug to treat fever and minor complications within 24-48 hours since the inception of treatment is also predicted to boost the growth of the market segment in the imminent time. Additionally, on the basis of end user, the hospitals segment is evaluated to grab the largest share over the forecast period, which can be credited to the high emphasis of patients all around the world to be treated under the supervision of a healthcare professional in a hospital facility.

On the basis of geographical analysis, the global trench fever treatment market is segmented into five major regions including North America, Europe, Asia Pacific, Latin America and the Middle East & Africa region. The market in North America is estimated to gather the most significant share and witness noteworthy growth over the forecast period on the back of the sudden emergence of cases of people with trench fever, and upsurge in healthcare spending in the region. As per the Centers for Medicare and Medicaid Services, the healthcare spending in the United States reached a value of USD 3.8 trillion, or USD 11,582 per person in 2019. The health spending accounted for 17.7 percent of the nation’s GDP. In addition, increase in population abusing alcohol and narcotic substances is also assessed to propel the region’s market growth in the coming years. Moreover, the market in Europe is also anticipated to grab a notable share owing to fact that the fever originated there, and high prevalence of the fever in poverty-stricken areas of the region. 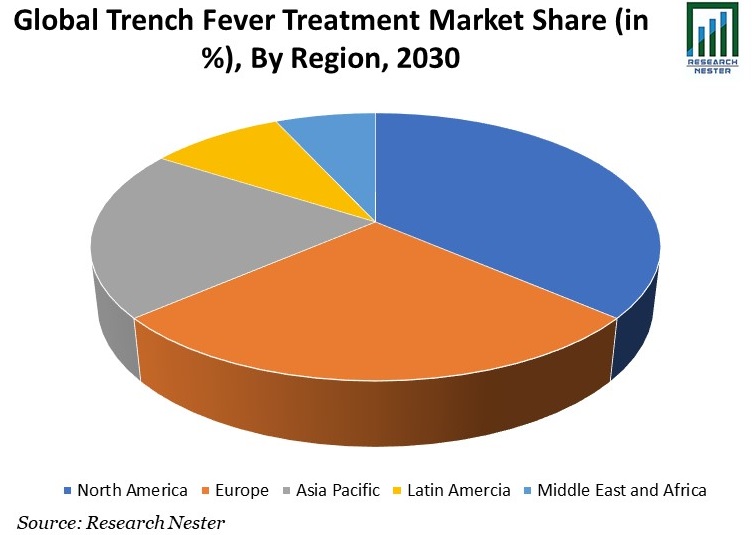 The global trench fever treatment market is further classified on the basis of region as follows:

What are the major factors driving the growth of the trench fever treatment market?

The major factors driving market growth are rising occurrence of trench fever across the globe and increasing number of patients of infections caused by bacteria.

What would be the CAGR of trench fever treatment market over the forecast period?

What are the challenges affecting the trench fever treatment market growth?

Lack of awareness regarding the treatment in underdeveloped regions is estimated to hamper the market growth.

Which region will provide more business opportunities for growth of trench fever treatment market in future?

North America will provide more business opportunities for market growth owing to the high number of cases of people with trench fever, and upsurge in healthcare spending in the region.

Who are the major players dominating the trench fever treatment market?

What are the segments in the trench fever treatment market?

The market is segmented by treatment, end user, drug distribution channel, and by region.

Which segment captures the largest market size in the treatment segment in the trench fever treatment market?

The doxycycline segment is anticipated to hold largest market size and is estimated to grow at a notable CAGR over the forecast period and display significant growth opportunities.