Rift Valley Fever (RVF) Treatment Market Segmentation by Transmission (Mosquito Vector, Cattle, and Others); by Symptoms (Encephalitis, Hemorrhagic fever, Ocular Issues, and Others); by Distribution Channel (Pharmacies, Hospital, and Others); and by Treatment (Medication, Supportive Care, and Others) – Global Demand Analysis & Opportunity Outlook 2030

The global Rift Valley fever (RVF) treatment market is estimated to grow at a substantial CAGR over the forecast period, i.e., 2022 – 2030. The growth of the market can be attributed to the rising cases of Rift Valley fever, along with absence of any specific medication for RVF. According to a report by the Center for Disease Control and Prevention (CDC), there is no FDA-approved treatment for RVF, and mild symptoms are treated using over-the-counter medications. The virus primarily infects animals, mostly cattle, such as, sheep and goat, which is transmitted to humans either through mosquito vector or through direct contact with infected animal. Certain occupational groups which generally come in contact with animal blood, for instance, herders, slaughterhouse workers, and veterinarians are at higher risk of infection. No case of human-to-human infection has been recorded. Symptoms include, fever, muscle pain, headache, loss of appetite, vomiting, and other flu-like symptoms at the early stage of infection. These can be treated using general fever medications, or infected person develops immunity against the virus. However, in severe cases, symptoms can be serious, such as retinal lesions, meningoencephalitis, loss of memory, hallucinations, vertigo, and hemorrhagic fever. According to the data by the World Health Organization, only 0.5–2% of patients develop eye or ocular diseases, and less than 1% experience meningoencephalitis and hemorrhagic fever. 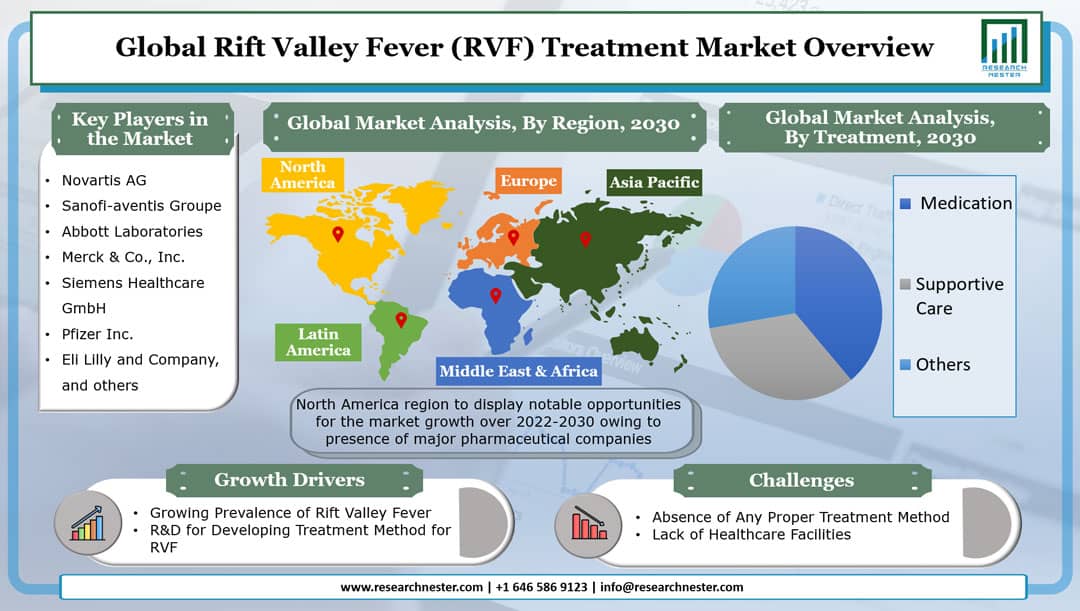 The Rift Valley fever is primarily limited in the Middle East and Africa region, and has been declared endemic in the region. Post 2000, approximately 12 outbreaks of RVF have been recorded in the region. A report by the WHO states that the most recent outbreak occurred in Republic of Niger in 2016, and Ministry of Health of the country recorded around 105 cases, including 28 deaths. The highest number of cases were reported in Yemen in 2000, with 1087 suspected cases and 121 deaths. 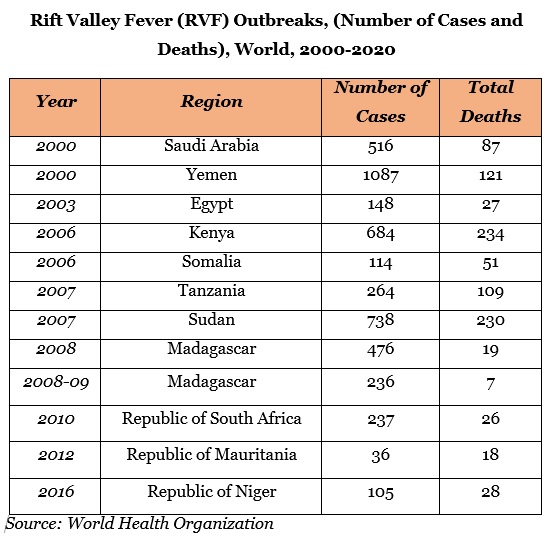 The market is segmented by transmission into mosquito vector, cattle, and others, out of which, the mosquito vector segment is anticipated to hold a modest share in the global Rift Valley fever treatment market over the forecast period on account of higher proximity of infection transmission through mosquito, along with lack of preventive methods in case of mosquito vector transmission. There is no requirement of direct contact with animal in case of transmission by mosquito, which makes in more dangerous and easier to spread. Such factors are estimated to boost the segment growth.

On the basis of geographical analysis, the global Rift Valley fever treatment market is segmented into five major regions including North America, Europe, Asia Pacific, Latin America and Middle East & Africa region. The market in Middle East and Africa region is estimated to attain largest share over the forecast period on the back of high prevalence of RVF in the region, along with lack of proper healthcare facilities to control the epidemic. Moreover, constant effort to improve the healthcare sector in the region, is estimated to boost the market growth.

The market in the North America region is anticipated to gain notable market share throughout the forecast period on the back of presence of major pharmaceutical companies, manufacturing medications required to treat RVF. 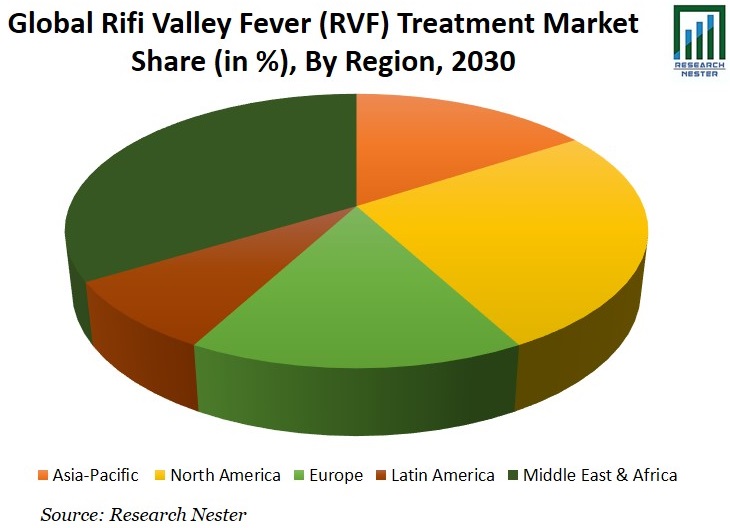 The global Rift Valley fever (RVF) treatment market is further classified on the basis of region as follows:

What are the major factors driving the growth of the rift valley fever (RVF) treatment market?

What would be the CAGR of rift valley fever (RVF) treatment market over the forecast period?

What are the challenges affecting the rift valley fever (RVF) treatment market growth?

Absence of any proper treatment method is estimated to hamper the market growth.

The market in the North America region is estimated to provide more business opportunities owing to the presence of major pharmaceutical companies in the region.

Who are the major players dominating the rift valley fever (RVF) treatment market?

What are the segments in the Rift Valley fever treatment market?

The market is segmented by transmission, symptoms, distribution channel, treatment, and by region.