Vaccines are biological products that protect the body from infectious diseases. A typical vaccine is a biological entity which is similar to the disease causing pathogen, either in the dead form or in the attenuated form. These agents contain surface proteins or a specific type of toxin. The immune system of the body is stimulated by these agents as it recognizes the agent as a foreign object and eliminates it based on a memory based mechanism.

The effect of vaccine is totally dependent on the route of administration. A British physician Edward Jenner discovered the first vaccine in the year 1796. The vaccine discovered was used to treat smallpox. Smallpox was first eradicated by vaccine. As antibiotics are not effective against viruses, vaccines provide an important role to protect the immune system of the body from different types of viruses.  Vaccination helps to develop memory B cells which are capable of activating the secondary immune response in the body.

The market is observing vibrant growth on account of increasing rate of infectious diseases around the world, thereby driving the demand for vaccines. Increase in investment and initiatives by the companies on various types of research and development activities for the development and discovery of vaccines is expected to drive the growth of the market. Rising immunization programs by the government and their active support along with rise in the production of technologically advanced vaccines is also anticipated to fuel the market growth. Further, the increase in the geriatric population and rising prevalence of cancer around the globe is estimated to support the growth of the market.

The vaccines market is anticipated to record a remarkable CAGR over the forecast period i.e. 2019-2027. The market is segmented by end user into adult, pediatric and traveler vaccines, out of which, the pediatric vaccines segment is expected to lead the end user segment as the vaccine industry is majorly focused on reducing the incidence of serious infectious diseases in infants.CLICK TO DOWNLOAD FREE SAMPLE REPORT 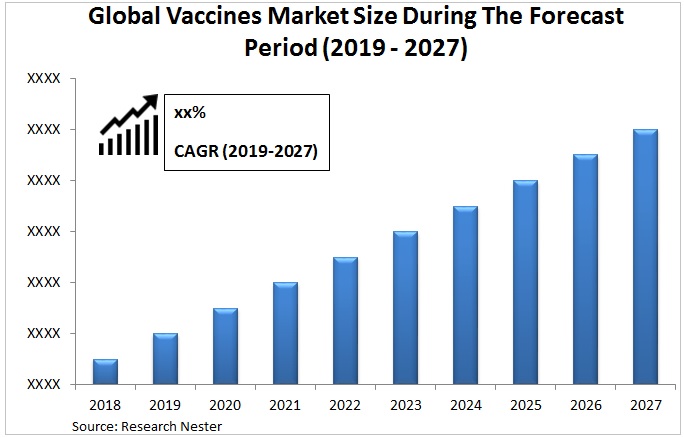 Different types of vaccines are used for different types of infectious diseases.  According to the World Health Organization (WHO), in the year 2016, the three types of infectious diseases that were ranked for being responsible for deaths were different types of diarrhea (1.4 million deaths), lower respiratory tract infections (3.0 million deaths) and tuberculosis (1.3 million deaths). The prevalence of infectious diseases are increasing and it is becoming a major concern for private and government organizations. Another report of WHO states that the cases of measles worldwide spiked in the year 2017 resulting in severe outbreaks of the disease. Due to improper vaccination coverage, the outbreak of measles took place in various regions leading to an estimation of 110 000 deaths. The report also states that the number of reported cases have enhanced more than 30% worldwide from the year 2016. This increased prevalence of infectious disease worldwide is expected to drive the market growth over the forecast period.

Vaccines are widely used for preventing a specific disease. Vaccination and immunization eradicated smallpox. The technological advancements regarding vaccines are increasing on account of rising applications of genetic engineering to target a specific disease. Plasmid based methods are widely used for the generation and production of reassortant vaccines. Adjuvants are also needed in conjunction with new advanced technology for vaccines. Latest specific compounds are developed to enhance the immunogenicity. Such technological progressions are anticipated to enhance the growth of the market during the forecast period.

North America is expected to lead the global vaccines market as they have advanced technologies for the research and development of vaccines. Additionally, the increasing healthcare expenditure followed by rising government support in the field of immunization and research and development of vaccines is expected to drive the growth of the market in this region.

Asia Pacific is expected to have the fastest growing market on the back of increasing initiatives by the government and private organizations for vaccination followed by the presence of large pool of population in the region.

The global vaccines market is further classified on the basis of region as follows: