The global smart personal safety and security device market is estimated to grow with a moderate CAGR during the forecast period, i.e., 2022-2030. The growth in crime rates, especially against women and children, along with the advancements in communication technology, is expected to fuel the growth of this market. The safety & security of women and children has always been an issue even after many technological advancements. With the arrival of the internet of things (IoT), many smart solutions for enhancing the security & safety of the users are being developed on a global level. The smart personal safety & security devices use sensors to alert the authorities and family through messages & audios about the immediate threat to the security of the user. Some devices even have the option of generating shockwaves to incapacitate the perpetrator temporarily. Along with this, smart personal safety devices also find their use amongst the defense forces to ensure safety during their operations. This is estimated to boost the market growth. 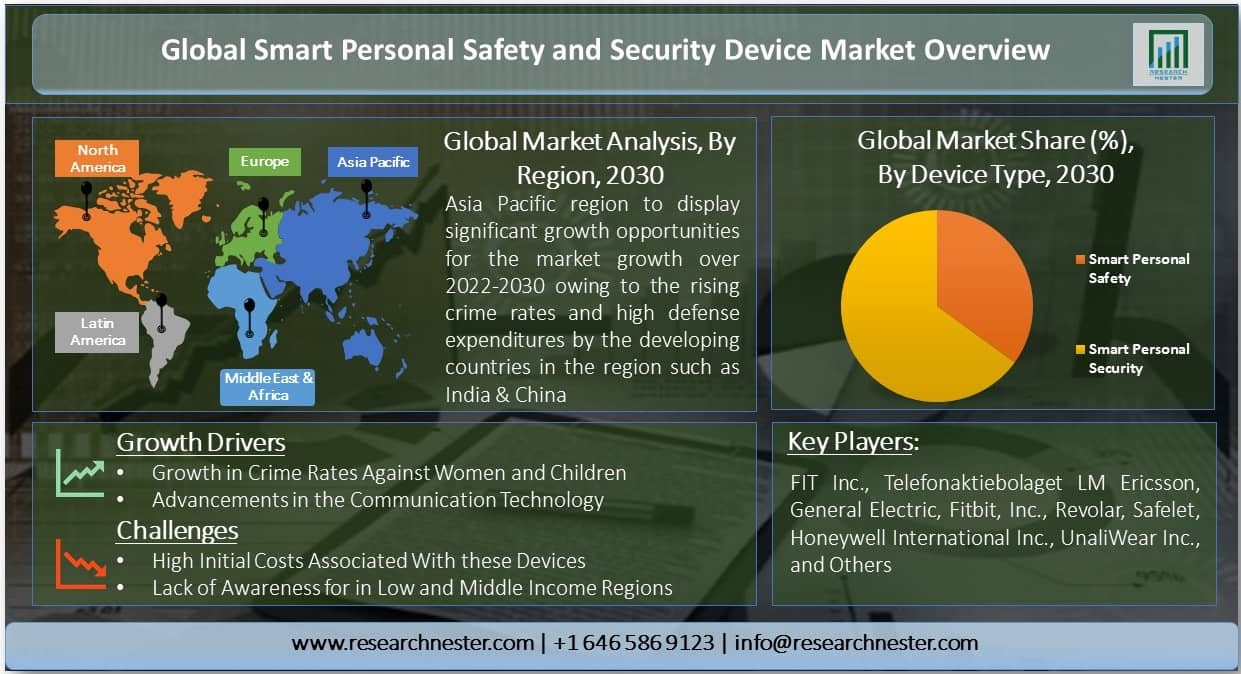 The growth of the market can also be attributed to factors, such as, the shift in customer preferences towards the adoption of smart security wearables and the growing developments in wrist and neck wearables. These smart wearables include rings, bracelets, pendants, & other devices. They have wireless technology for connecting to the internet. According to the data collected from the World Bank, in 2018, the prevalence of intentional homicides was 5 per 100,000 population for the U.S. This number was almost four times in Latin American countries. The necessity for ensuring the safety and security of the end-users by controlling crime rates is expected to contribute significantly to market growth.

The market is segmented on the basis of device type into smart personal safety and smart personal security, out of which the smart personal security segment is anticipated to grab the largest share by the end of 2021 on account of its growing applications. The surge in demand, as smart personal security devices have a wide range of applications, including wearable devices, bulletproof bags, personal alarms, panic buttons, and others, is also projected to contribute to the growth of the segment during the forecast period. On the basis of end-user, the consumer segment in the global smart personal safety and security device market is projected to grow with a significant CAGR over the forecast period. The growth of the segment can be attributed to the increase in the crime rates and consequent rise in the need for these devices for personal uses. Moreover, these devices can also be potentially deployed for personal healthcare monitoring.

Geographically, the market is segmented into North America, Latin America, Europe, Asia Pacific, and the Middle East & Africa region. The market in the Asia Pacific is predicted to grow at the highest CAGR over the forecast period owing to the rising crime rates and high defense expenditures by the developing countries in the region, such as India and China. According to the World Bank, in 2018, the prevalence of intentional homicides for India was 3 out of every 100,000 individuals, whereas the same for Afghanistan was 7, and Bangladesh was 2. The need to control these criminal cases, combined with government initiatives and increasing adoption of IoT are expected to boost the demand for smart personal safety & security devices, which is expected to contribute to the market growth in the region.

Furthermore, in 2021, the market in North America is evaluated to occupy the largest share in terms of revenue, owing to the high emphasis on personal safety & security and the greater awareness about the use of smart personal safety & security devices in the region. Along with this, North America also leads in terms of favourable regulatory policies, which is also expected to contribute to the market growth in the region.

Alternatively, the market in Latin America is also anticipated to occupy a significant share in the market by the end of 2030, on account of high crime rates in the major countries, such as, Brazil, Chile, and Argentina. As per the report of World Bank on prevalence of intentional homicides, Brazil had one of the highest rates of 27 out of every 100,000 individuals in 2018. 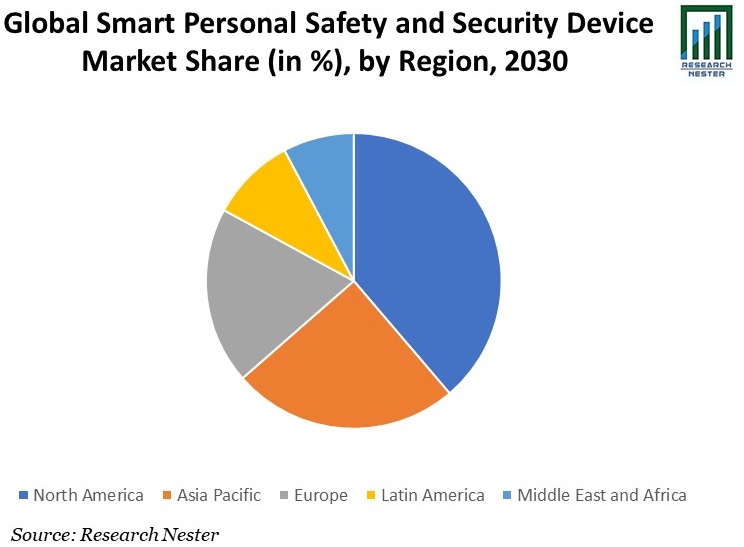 The global smart personal safety and security device market is further classified on the basis of region as follows:

1) What are the major factors driving the growth of the smart personal safety and security device market?

Ans: The growth in crime rates, especially against women & children and the advancements in communication technology are the key factors driving market growth.

2) What would be the CAGR of smart personal safety and security device market over the forecast period?

3) What are the challenges affecting the smart personal safety and security device market growth?

Ans: The high initial costs and lack of awareness about the devices in low- and middle-income regions are estimated to hamper market growth.

4) Which region will provide more business opportunities for growth of smart personal safety and security device market in future?

Ans: The market in Asia Pacific region will provide ample growth opportunities owing to the rising crime rates and high defense expenditures by the developing countries in the region.

5) Who are the major players dominating the smart personal safety and security device market?

7) What are the segments in the smart personal safety and security device market?

Ans: The market is segmented by device type, end-user, and region.

8) Which segment under the end-user segment captures the largest market size in the smart personal safety and security device market?

Ans: With respect to end-user, the consumers’ segment is anticipated to hold the largest market share owing to the increase in the crime rates and consequent rise in the need for these devices for personal uses.