Extensive insights into the Growth of Market amidst COVID-19

Robot software is a set of coded instructions or commands that helps in the communication between mechanical devices and electronic systems to perform series of tasks. The artificial intelligence (AI) powered robots perform the tasks autonomously. The instructor can use various recognition modules installed in recognition software for voice, speech, image, gesture, facial and character recognition. When integrated with AI, the recognition software help the robots to overcome problems such as language and dialog skills. There are several software and framework available for easing robot programming.

Robot software helps organization in getting better output in lesser time span which in turn helps the organization to focus more on strategic, creative and customer facing roles instead of focusing on manual and repetitive tasks.

The market is observing vibrant growth on account of increasing adoption of robot software across various verticals such as healthcare, defense, security, manufacturing, telecommunication, transportation, logistics and others. Increasing governmental support for small, medium and large enterprises by providing loan facilities for starting a new business, growing technological advancements along with rising need to reduce cost by maintaining the quality and adopting artificial intelligence (AI) & internet of things (IoT) are supporting the growth of the market. Additionally, reduction in labor cost, enhanced speed of work, increased accuracy and improved scalability and quality of production are some of the major factors that are expected to boost the growth of the market in upcoming years.

The robot software market is anticipated to record a CAGR of 47.3% over the forecast period i.e. 2019-2027. The market is segmented by robot type into industrial and service robots, out of which, the industrial robots are expected to dominate the market on the back of their properties in reducing manual workforce and increasing operational efficiency. Growing labor issues and rising competition among manufacturing industries is driving the demand for industrial robots. Further, the market is segmented by deployment model into on-premises and on-demand, out of which, the on-demand deployment is anticipated to have a higher adoption rate owing to the reduction in overhead cost such as cost of hardware, software, data, staff and maintenance.CLICK TO DOWNLOAD FREE SAMPLE 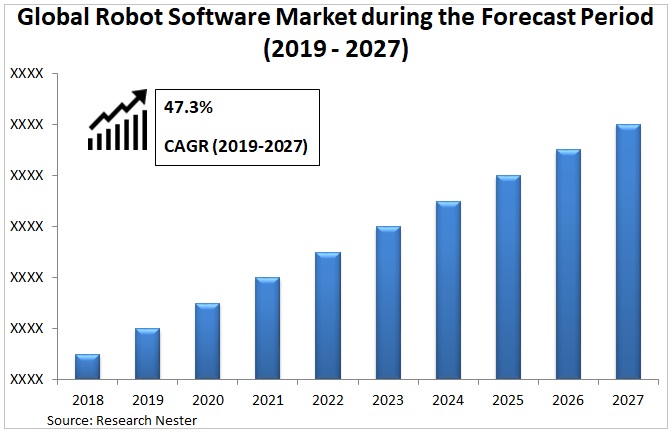 There is a growing demand for robotic software across various verticals such as security, defense, manufacturing, healthcare, logistics, telecommunication and others. Businesses are adopting robot software to reduce turnaround time and increase efficiency for better output. Demand for tiny robots and service robots are increasing across various verticals on the back of increasing ability of software and frameworks to perform different functions according to the need of the organization, which in turn is expected to boost the growth of the market during the forecast period.

Rising need to reduce cost and maintain the quality of output is increasing the adoption of internet of things (IoT) and artificial intelligence (AI). AI reduces the turnaround time of work and increases the quality of product. These factors are estimated to support the growth of the market.

Lack of Data Security in Cloud Based System

Lack of data security on cloud based system due to growing rate of cybercrime across various countries along with lack of stringent rules and regulations pertaining to cybercrime are some of the factors that are estimated to restrain the growth of the market during the forecast period.

North America is expected to dominate the market on the back of early adoption of robotic software in various verticals such as manufacturing, healthcare, defense, security, transportation, logistics and others. The growing adoption of tiny robots and service robots for various functions is expected to drive the growth of market in this region.

Further, Asia Pacific is anticipated to have largest growth rate on account of increasing adoption of internet of things (IoT) and artificial intelligence (AI). Increasing export of cost effective products from various emerging countries such as China, Japan, South Korea, Singapore and India is expected to boost the growth of the market in this region.

The global robot software market is further classified on the basis of region as follows: