The global rice husk ash market is estimated to grow at CAGR of ~5% over the forecast period, i.e., 2022 – 2030. The growth of the market can be attributed to the high surface area, porous nature, and lightweight of rice husk ash or RHA, which makes it useful for construction, steel industry and other applications. The growing adoption of RHA as an additive for concrete in construction industry instead of fly ash, along with the increasing production of concrete, and other chemical-based additives is estimated to further boost the market growth. Globally, in the year 2020, over 3.9 billion metric tons of concrete was produced. The use of RHA can reduce the overall construction cost, which is also estimated to fuel its demand. In addition to this, the cost of rice husk ash is very low, and the raw material is also inexpensive, which is estimated to increase the demand for RHA amongst various end-users. The presence of high contents of silica is also estimated to boost the market growth as it can be used to produce high purity silica. 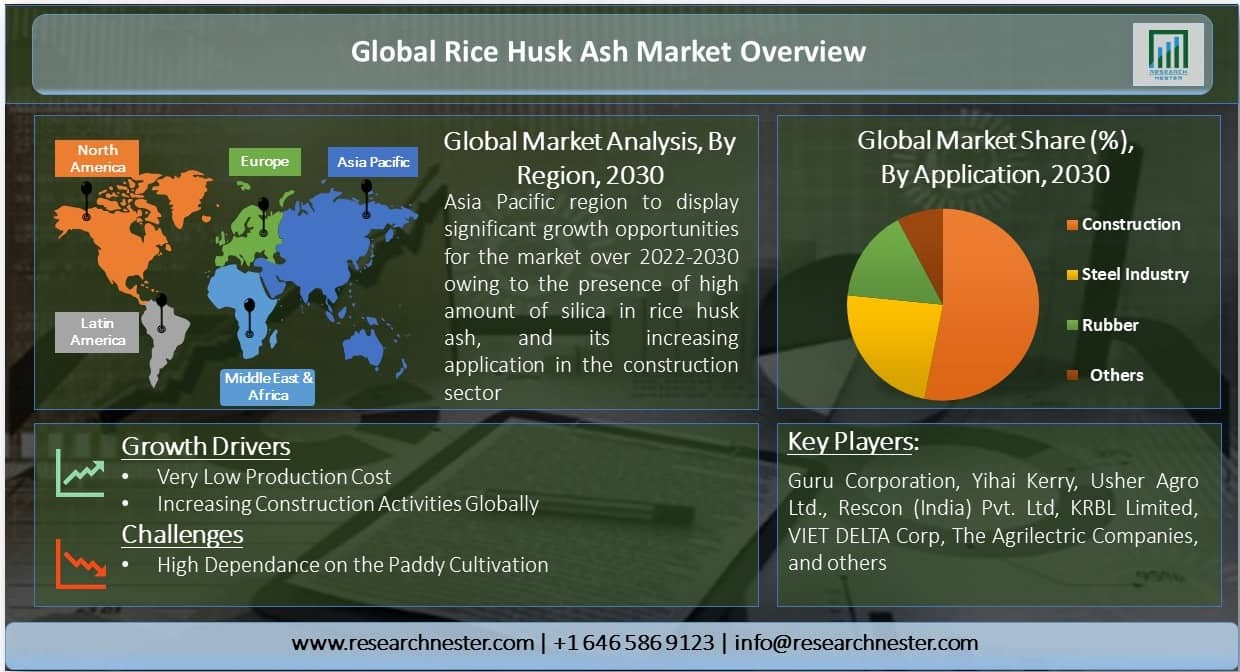 The global rice husk ash market is segmented by silica content into below 80%, 80-89%, and above 90%, out of which, the above 90% segment is anticipated to hold the largest share in the market over the forecast period on account of increasing use of RHA with 90% silica as a filler, concrete additive, abrasive agent, oil adsorbent, as a suspension agent for porcelain enamels, and sweeping component amongst various end-user industries. On the basis of application, the market is segmented into construction, steel industry, rubber, and others, out of which, the construction segment is expected to witness significant growth over the forecast period, owing to the increasing construction activities on a global level, along with growing use of RHA as a replacement of concrete for making low-cost building blocks.

On the basis of geographical analysis, the global rice husk ash market is segmented into five major regions including North America, Europe, Asia Pacific, Latin America and Middle East & Africa region. The market in the Asia Pacific region is estimated to witness highest growth over the forecast period on the back of ample availability of raw material for RHA industry in this region, backed by the high paddy cultivation practices in India, China, Japan, and Sri Lanka. In 2019, the total production of rice in India crossed 2500 kg per hectare, while in China, 210 million metric tons of rice was produced in the same year.

The market in the Latin America is also estimated to witness notable growth by the end of 2030, on the back of rising paddy cultivation along with increasing demand for low-cost construction. 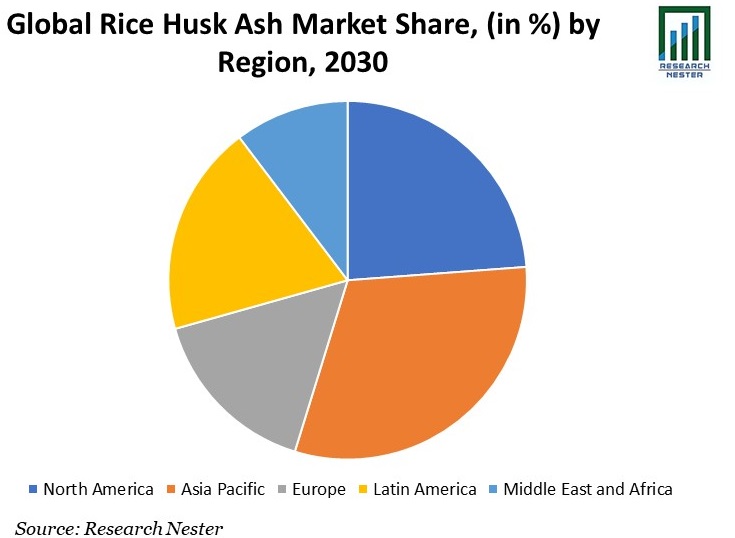 The global rice husk ash market is further classified on the basis of region as follows:

What are the major factors driving the growth of the rice husk ash market?

The presence of high amount of silica in rice husk ash, and its increasing application in construction is estimated to boost the market growth.

What would be the CAGR of rice husk ash market over the forecast period?

What are the challenges affecting the rice husk ash market growth?

High dependance on paddy cultivation is estimated to hamper the market growth.

Which region will provide more business opportunities for growth of rice husk ash market in future?

The Asia Pacific region is estimated to provide maximum growth opportunities over the forecast period, owing to the high production of rice in the region.

Who are the major players dominating the rice husk ash market?

What are the segments in the rice husk ash market?

The market is segmented by silicon content, application, and by region.

Which sub-segment captures the largest market size in the application segment in the rice husk ash market?

The construction segment is anticipated to hold largest market size in the forecast period and display significant growth opportunities owing to the growing demand for low-cost construction in underdeveloped and developing countries.