The global portable fuel cell market is estimated to grow at a CAGR of ~20% over the forecast period, i.e., 2022 – 2030. The growth of the market can be attributed to the growing demand for fuel cells, for various applications, including electric vehicles. Fuel cells are electrochemical cells which use chemical energy of primarily hydrogen to convert into electrical energy. Hydrogen deployment has witnessed massive leaps for growth over the past few decades, owing to its application in aircrafts, EVs, and others. The growing application of hydrogen as a fuel, backed by government initiatives to promote hydrogen deployment, is estimated to boost the market growth. For instance, government programs, such as, IEA Hydrogen Technology Collaboration Program and the International Partnership for Hydrogen and Fuel Cells in the Economy, are some of initiatives undertaken by International Energy Agency (IEA) at the G20, 2019.  Along with this, the increasing usage of fuel cell-based vehicles, combined with the surge in development in the power sector are also expected to boost market growth. 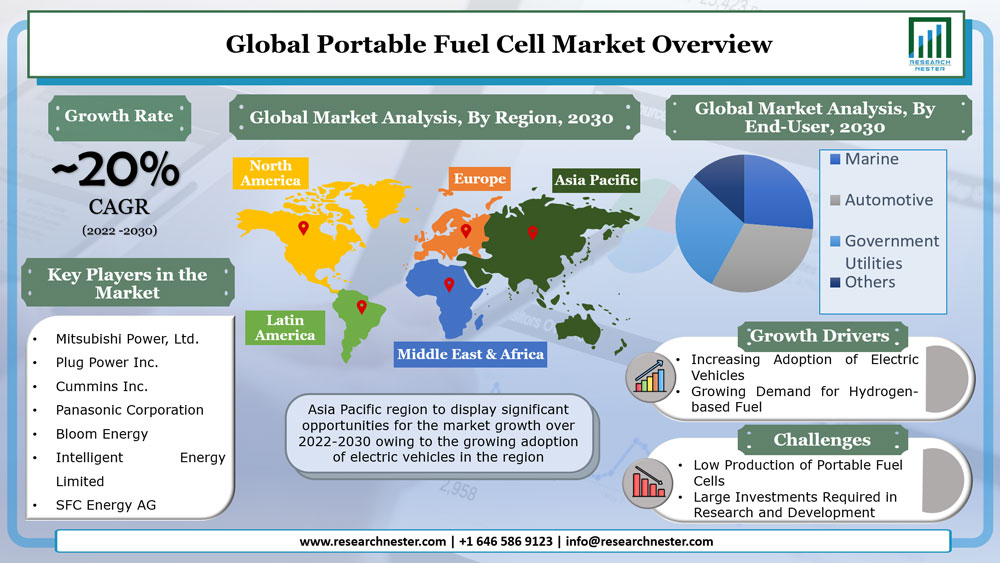 Along with this, the rising number of public-private partnerships promoting the adoption of hydrogen-based applications, and growing awareness regarding environmental pollution caused by traditional methods of generating electricity, are estimated to boost the market growth. According to a report by IEA, the share of renewable energy sources in electricity generation grew from 27% in 2019 to 29% in 2020. Moreover, the consumption of renewable energy increased by 3% in 2020. Furthermore, governments of developed countries are extensively involved in implementing eco-friendly initiatives for the elimination of emission rates, and promote energy conservation. As per the data by IEA, 7024.9 TWh electricity was generated by renewable sources in 2019. 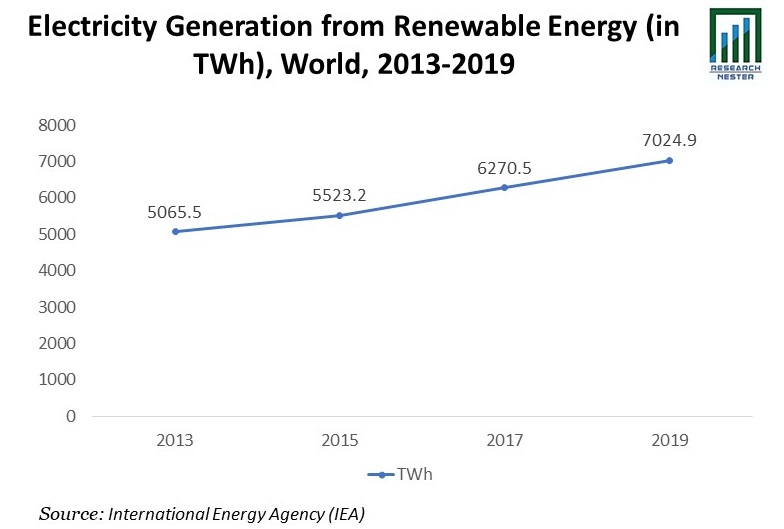 The market is segmented by end-user into marine, automotive, government utilities, and others, out of which, the automotive segment is anticipated to hold the notable share in the global portable fuel cell market over the forecast period on account of increasing demand for fuel-cell based vehicles, along with rising demand for EVs. Moreover, growing public awareness regarding environment degradation, is further estimated to boost the segment growth.

On the basis of geographical analysis, the global portable fuel cell market is segmented into five major regions including North America, Europe, Asia Pacific, Latin America and Middle East & Africa region. The market in Asia Pacific region is estimated to witness noteworthy growth over the forecast period on the back of rising demand for EVs in Japan and South Korea, along with increasing usage of fuel cells in vehicles in the region. Apart from this, the growing government investments in clean power generation is also expected to boost the market growth in the region.

The market in the North America region is anticipated to gain the largest market share throughout the forecast period owing to the increasing adoption of fuel cells, among other green fuels, along with rising demand for electric vehicles in the region. According to a report by the IEA, in 2020, around 1,138,654 BEV were actively being used in the U.S., up from 882,281 cars in 2019. 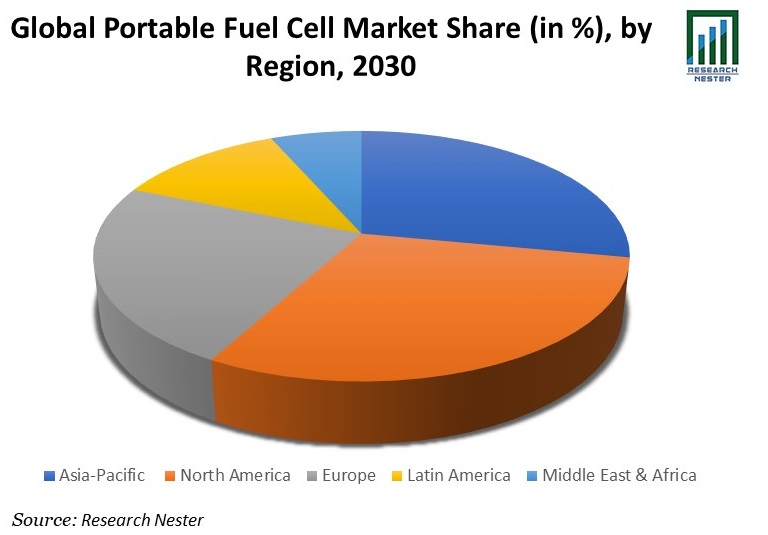 The global portable fuel cell market is further classified on the basis of region as follows:

What are the major factors driving the growth of the portable fuel cell market?

The growing application of portable fuel cells in vehicles, and high demand for EVs is estimated to boost the market growth.

What would be the CAGR of portable fuel cell market over the forecast period?

What are the challenges affecting the portable fuel cell market growth?

Low production rate, and high investment are estimated to hamper the market growth.

Which region will provide more business opportunities for growth of portable fuel cell market in future?

The market in the North America region is estimated to provide more business opportunities over the forecast period owing to the growing adoption of electric vehicles in the region.

Who are the major players dominating the portable fuel cell market?

What are the segments in the portable fuel cell market?

Which segment captures the largest market size in end-user segment in the portable fuel cell market?

The automotive segment is anticipated to hold largest market over the forecast period and display significant growth opportunities.