The global orthopedic biomaterials market is estimated to generate a substantial revenue by expanding at a CAGR of ~9% over the forecast period, i.e., 2022 – 2030. The surge in incidences of musculoskeletal disorders and other chronic skeletal conditions, coupled with rapidly increasing geriatric population are the primary factors expected to augment the market growth in the upcoming years. According to the World Health Organization, as of 2021, approximately 1.71 billion people have musculoskeletal conditions worldwide. Among musculoskeletal disorders, low back pain causes the highest burden with a prevalence of 568 million people. Along with these, increasing number of trauma cases as a result of accidents and sports is also attributed to raise the demand for biomaterials used in orthopedic implants in the future. Furthermore, notable innovations in the regenerative medicine space and cell-based techniques have paved the way for efficient solutions for treating a wide range of diseases. This is giving rise to the integration of implants made from orthopedic biomaterials into several treatment procedures, which in turn is predicted to play an imperative role in offering profitable business opportunities to the market. 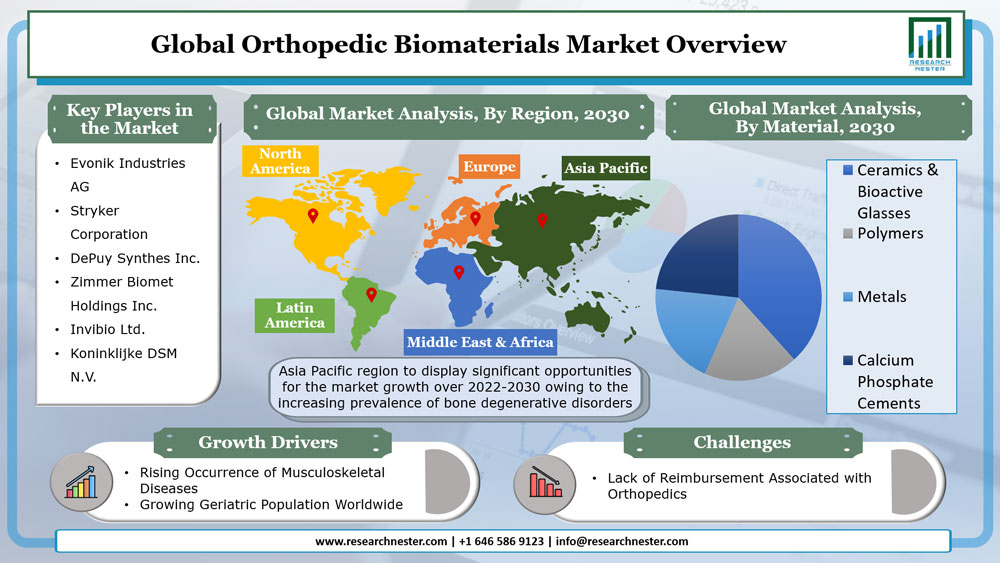 The market is segmented by materials into ceramics & bioactive glasses, polymers, metals, and calcium phosphate cements, out of which, the ceramics & bioactive glasses segment is anticipated to hold the largest share in the global orthopedic biomaterials market. This can be accounted to the growing adoption of these materials in spine surgery and interbody fusion methods. Apart from these, escalating usage of pedicle screws and synthetic cages during fixation procedures is also assessed to foster the growth of the market segment. Additionally, on the basis of application, the orthopedic implants segment is evaluated to occupy the largest share owing to the increasing occurrence of disc degenerative conditions and bone fractures, along with rising trauma cases and road traffic crashes. As per the American Association for the Surgery of Trauma, road traffic crashes kill 1.2 million people annually around the world (3242 people a day), and 90% of these deaths are in low- or middle-income countries. CLICK TO DOWNLOAD SAMPLE REPORT

On the basis of geographical analysis, the global orthopedic biomaterials market is segmented into five major regions including North America, Europe, Asia Pacific, Latin America and the Middle East & Africa region. The market in the Asia Pacific is estimated to witness noteworthy growth over the forecast period on the back of the growing prevalence of bone degenerative diseases in the region’s low- and middle-income economies. In addition, continuous hike in healthcare expenditure and significant improvements in the medical infrastructure are also projected to propel APAC’s market growth in the future. Moreover, the market in North America is anticipated to grab the largest share during the forecast period. Increasing target population, intensifying geriatric population, and large number of pharmaceutical companies are expected to contribute significantly to the region’s market growth in the future. As per the United States Census Bureau, around 40.3 million U.S. residents were 65 years and older in 2010, which increased up to 54.1 million in July, 2019.

The global orthopedic biomaterials market is further classified on the basis of region as follows:

Our in-depth analysis of the global orthopedic biomaterials market includes the following segments:

What are the major factors driving the growth of the orthopedic biomaterials market?

What would be the CAGR of orthopedic biomaterials market over the forecast period?

What are the challenges affecting the orthopedic biomaterials market growth?

Lack of reimbursement related to orthopedics is estimated to hamper the market growth.

Which region will provide more business opportunities for growth of orthopedic biomaterials market in future?

Asia Pacific will provide more business opportunities for market growth owing to the growing prevalence of bone degenerative diseases in the region’s low- and middle-income economies.

Who are the major players dominating the orthopedic biomaterials market?

What are the segments in the orthopedic biomaterials market?

The market is segmented by material, application, and by region.

Which segment captures the largest market size in the application segment in the orthopedic biomaterials market?

The orthopedic implants segment is anticipated to hold largest market size and is estimated to grow at a notable CAGR over the forecast period and display significant growth opportunities.

Rift Valley Fever (RVF) Treatment Market Segmentation by Transmission (Mosquito Vector, Cattle, and Others); by Symptoms (Encephalitis, Hemorrhagic fever, Ocular Issues, and Others); by Distribution Channel (Pharmacies, Hospital, and Others); and by Treatment (Medication, Supportive Care, and Others) – Global Demand Analysis & Opportunity Outlook 2030