The global next generation wireless network market is estimated to acquire a substantial revenue by growing at a CAGR of ~15% over the forecast period, i.e., 2022 – 2030. The growth of the market can be attributed primarily to the continuous evolution of wireless technology, beginning from 0G, i.e., radio telephones to 5G, the next-gen wireless system set. 5G wireless networks are being developed in a manner to be well-suited for very high frequencies, equipped with low latency and huge data capacities, which in turn is expected to intensify the demand for these networks in the near future. In 2020, more than 210 million customers purchased a 5G subscription, which is calculated to rise by almost 8 times, reaching up to 1.6 billion by the end of the year 2023. Along with these, with the rising emergence of internet of things (IoT) connectivity, more wireless network services are surfacing with an aim to downscale energy consumption and cost. This is another factor projected to drive market growth in the forthcoming years. Advancements in wireless sensor networks, informatics and telecommunications is also assessed to offer profitable opportunities to the market players. 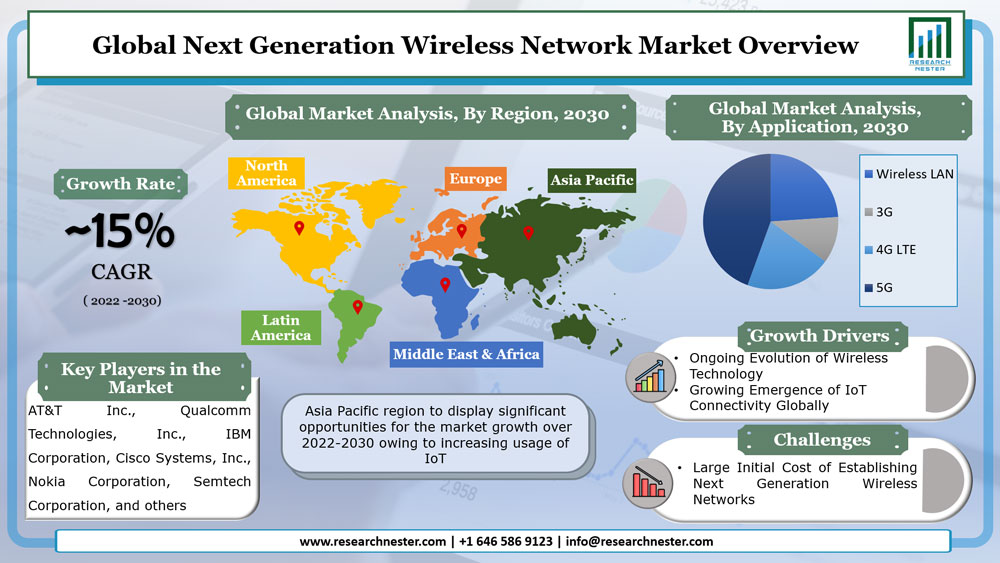 The market is segmented by end user into telecommunication, consumer electronics, manufacturing, healthcare, banking, automotive, retail, aerospace and defense, and others, out of which, the healthcare segment is anticipated to hold the largest share in the global next generation wireless network market. This can be accounted to the shift of healthcare spending towards preventive care as 5G offers enormous opportunities for expanding monitoring practices via wearable devices. Increasing development of microscopic cameras and remote-controlled robotic surgery are also projected to drive growth of the market segment in the future. In addition, the manufacturing segment is also evaluated to occupy a notable market share over the forecast period owing to the growing adoption of artificial intelligence and IoT technologies in the industry for improving data collection and enhancing efficiency. Moreover, on the basis of technology, the 5G segment is predicted to observe the highest CAGR by the end of 2030, ascribing to the high flexibility of 5G technology as compared to Wi-Fi, and its ability to support a wide range of devices.

On the basis of geographical analysis, the global next generation wireless network market is segmented into five major regions including North America, Europe, Asia Pacific, Latin America and the Middle East & Africa region. The market in Asia Pacific is estimated to witness noteworthy growth over the forecast period on the back of the implementation of government schemes supporting the development of wireless cellular technologies such as O-RAN architecture, and rising usage of IoT among organizations, especially in China, India and Japan. For instance, more than 2.8 billion IoT connections were established in China in 2018, which increased up to approximately 6.8 billion by the end of 2020. Additionally, the market in North America is projected to grab the largest share during the forecast period in view of the rising adoption of wireless technology in applications such as household appliances, self-driving cars and industrial machinery. In addition, strong presence of major IT players in the region is also assessed to fuel the market’s progress in the imminent time.

The global next generation wireless network market is further classified on the basis of region as follows:

Our in-depth analysis of the global next generation wireless network market includes the following segments:

What are the major factors driving the growth of the next generation wireless network market?

What would be the CAGR of next generation wireless network market over the forecast period?

What are the challenges affecting the next generation wireless network market growth?

High initial investment to deploy next generation wireless networks is estimated to hamper the market growth.

Which region will provide more business opportunities for growth of next generation wireless network market in future?

Asia Pacific region will provide more opportunities for market growth owing to the implementation of government schemes supporting the development of wireless cellular technologies in the region.

Who are the major players dominating the next generation wireless network market?

The major players in the market are AT&T Inc., Qualcomm Technologies, Inc., IBM Corporation, Cisco Systems, Inc., and others.

What are the segments in the next generation wireless network market?

The market is segmented by technology, type, end user, and by region.

Which segment captures the largest market size in the technology segment in the next generation wireless network market?

The 5G segment is anticipated to hold largest market size and is estimated to grow at a robust CAGR over the forecast period and display significant growth opportunities.