In today’s era of booming technology, we carry so much of information in our hands via our cell phones which is not just limited to calls, texts, playing games, Google search, or booking a cab among others but has now expanded to control numerous devices from a distance over the internet connectivity. This technological advancement is often termed as ‘Internet of Things (IoT)’ and has numerous applications in consumer smart home applications, building and home automation, infrastructure, agriculture, environmental monitoring, medical & healthcare, manufacturing, energy management, old-age care and others. It works on a simple concept, connecting all the devices, things or products with RFID (Radio Frequency Identification) along with routers, actuators and sensors like temperature sensors, moisture sensors, light sensors, a motion sensor etc. and saves that data for future predicaments of their functionality over the internet.

With the rapid pace of urbanization in developed regions and rising demand for connected smart devices, the IoT market is estimated to expand with significant growth rate in upcoming years. Many nations around the world have taken initiatives to build smart cities that are equipped with high end connectivity for various services. Smart cities require sensors, routers and smart devices among others to provide better services to the population. These factors are expected to propel the growth of the internet of things (IoT) market with valuation of USD 2,108.2 Billion by 2023 from USD 679.4 Billion during 2016. Further, the global IoT market is predicted to witness CAGR of 17.56% between the years 2016 and 2023.

The global internet of things (IoT) market is segmented by regions into North America, Latin America, Europe, Asia-Pacific and Middle East and Africa, out of which, Asia-Pacific accounted for the highest share of 34% in Global Internet of Things (IoT) Market in 2016 and is expected to continue its dominant stance over the forecast period. China is predicted to have largest market size in overall Asia-Pacific IoT Market, whereas India is expected to grow with highest CAGR of 24.24% during 2016-2023. 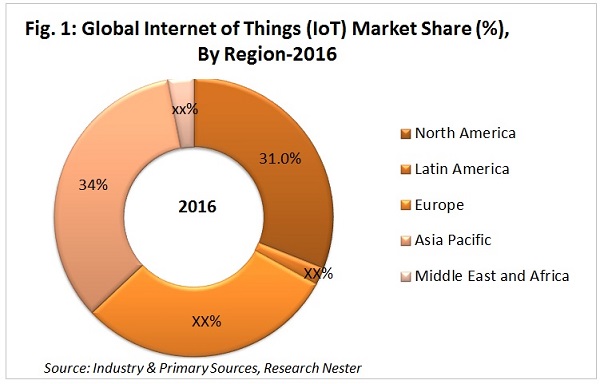 Further, U.S. is one of the largest importer of electronic goods including smart devices such as wearable watches. The rising import activities in the country further increased the supply of connected devices mounting the pressure on the players to decrease the price of internet of things (IoT) devices which propelled the demand for internet of things (IoT) devices in North America Region. Additionally, the rising adoption of connected devices along with rising personal disposable income of the population is anticipated to boost the market of Europe IoT market with second largest market share over the forecast period.

The global internet of things (IoT) market is divided into components and software, out of which, the component segment garnered the highest market revenue of USD 512.3 Billion as compared to USD 167.1 Billion by software segment during 2016. The software segment is predicted to grow with highest CAGR of 20.24% over the forecast period. The software segment is further divided into real-time streaming analytics, security software, data management, remote monitoring software and network band management. The data management segment drove the market with highest market size in 2016 and is predicted to behold this positive growth over the forecast period, whereas the real-time streaming segment is predicted to witness the highest CAGR during 2016-2023 and is expected to observe Y-o-Y growth of 27.41% in 2023.

Further, the components segment is segmented into devices, sensors, actuators and platforms. Among these segments, the devices segment is the largest revenue generating segment and is expected to observe Y-o-Y growth of 18.6% in 2023. 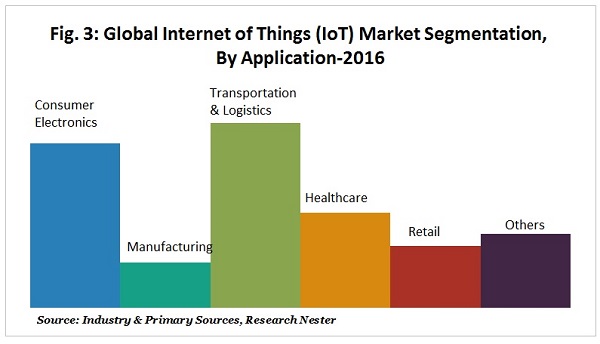 The global internet of things (IoT) market is thriving on the back of rising development of smart and enhanced connectivity infrastructure in developing and developed nations such as U.S., China, Japan, India and others. Further, the swelled disposable income of the population supported by the positive GDP figures in growing nations is resulting in the increased penetration of smart consumer electronics across the globe. Along with that, the rising trend of smart electronics, growing digitalization in various end-use industries, shifting of public and private sectors towards the adoption of IT-based facilities are boosting the worldwide demand for internet of things (IoT) services.

The hackers are looking for more ways to strike critical infrastructure, such as power grids, hydroelectric dams, chemical plants and more. This has led to the rising concerns regarding privacy and safety of data. Further, the lack of skilled expertise and high cost of IoT solutions and services are some of the reasons that are hampering the growth of the market.

IBM, an American multinational technology company acquired various technologies and software solution companies and also teamed up with Slack Technologies for data crunching Chatbot. The acquisition strategy of IBM Corporation is predicted to spur the growth across the globe in near future. Further, the IBM introduced an innovative hybrid cloud for enterprises, thus increasing the limits of technology.

Moreover, other key and niche players are working towards the expansion of product portfolio along with investing in high quality, highly engineered and innovative technologies in order to gain competitive edge in the global internet of things (IoT) market.