O-RAN or Open Radio Access Network, also known as Open RAN, is a concept that is based on interoperability and standardization of RAN elements. The logical function, as described by the O-RAN ALLIANCE is targeted for near real-time control and optimization of E2 nodes functions and resources with control loops in the order of 10 ms-1s. This is achieved by fine-grained data collection and actions over the E2 interface. 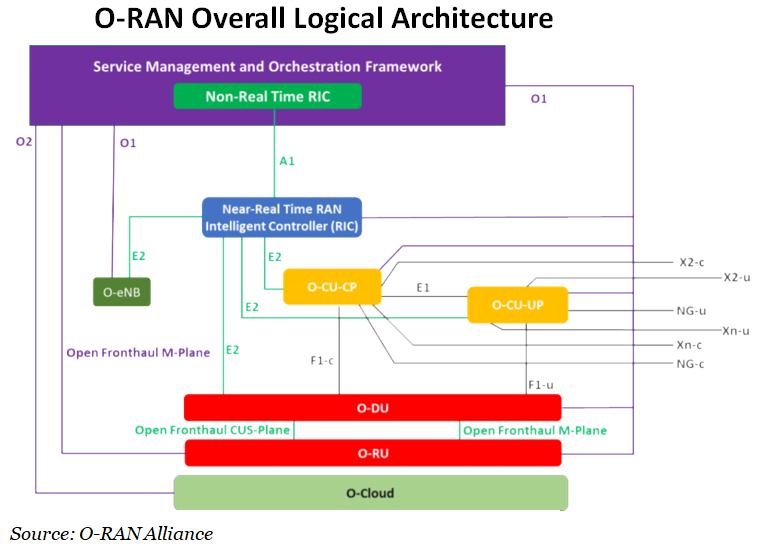 The near-RT-RIC is a near-real-time, micro-service-based software platform which is designed for hosting micro-service-based applications, known as xApps. This logical function is also designed to be compatible with different RRM split options. The software platform also provides xApps cloud-based infrastructure for controlling a distributed collection of RAN Infrastructure, such as eNB, gNB, CU, and DU among others, in an area via the southbound E2 protocol of the O-RAN ALLIANCE logical architecture.

The O-RAN ALLIANCE was founded by a group of leading telecom operators from around the world, namely AT&T, Deutsche Telekom, China Mobile, Orange and NTT Docomo in February 2018. It was established in August 2018 as a German entity and was designed to enable next generation RAN infrastructures.

The global O-RAN Near-Real-Time RAN Intelligent Controller (Near-RT-RIC) market is thriving on the back of the growing need for advanced intelligent controller systems for the 5G network architecture, coupled with the increasing commercial expansion of 5G networks. According to the statistics by the GSM Association (GSMA), until September 2020, there has been a total of 106 commercial 5G launches, along with 7% population penetration rate to the 5G network. The statistics also anticipated that by 2025, 1.2 billion connections will account to 5G network. Additionally, the global O-RAN Near-Real-Time RAN Intelligent Controller (Near-RT-RIC) market is anticipated to record a significant CAGR throughout the forecast period, i.e. 2021-2028. The market is segmented by components into A1 Mediator, Demo1, E2 Manager (E2M), E2 Terminator (E2T), Logging, RIC Alarm System, RIC Message Router (RMR), RNIB, Routing Manager, xApp Framework for CXX, xApp Framework for Go and xApp Framework for Python. On the other hand, the market is also segmented by deployment into centralized and distributed. CLICK TO DOWNLOAD SAMPLE REPORT

With the advancement in telecom infrastructure, telecom companies are gradually shifting towards the 5G network architecture, backed by the need for high speed internet connectivity, advancements in technology and increasing adoption of IoT devices amongst others. Increasing challenges faced by the telecom operators for managing their RAN, has raised the need for advanced RAN orchestration and management platforms. The O-RAN ALLIANCE, so as to mitigate these issues, went back to the controller concept for enabling the best-of-breed Open RAN. RAN Intelligent Controllers (RIC) is a new function introduced by O-RAN to support all the G’s, i.e. 2G, 3G, 4G and 5G, which was also the primary reason behind the Open RAN concept. The near-RT RIC enhances embedded intelligence. Further, the platform is also responsible for per-UE controlled load-balancing, interference detection, RB management and mitigation.

5G network infrastructure is being deployed gradually worldwide. Telecom operators are increasingly investing to transform their existing network architecture to match with the requirements of the latest network technology. Moreover, favorable government initiatives across nations worldwide are further helping telecom operators to invest in setting up 5G network technology in these nations, therefore raising the demand for advanced network topology solutions, such as O-RAN Near-Real-Time RAN Intelligent Controller (Near-RT-RIC). Such factors are anticipated to drive the growth of the global O-RAN Near-Real-Time RAN Intelligent Controller (Near-RT-RIC) market in the coming years.

Challenges for Deploying and Managing O-RAN Based Networks

The O-RAN concept are still in its developmental phase. Organizations in the telecom industry are increasingly investing on research and developments, yet the concern for the interoperability and end-to-end performance remains uncertain. The complexities anticipated in the deployment of the O-RAN concept still requires in-depth research and analysis, therefore raising the need for more contribution from the operators. Such factors are anticipated to limit the growth of the global O-RAN Near-Real-Time RAN Intelligent Controller (Near-RT-RIC) market.

The market in North America is anticipated to hold the largest market share on account of the presence of numerous telecom operators who are offering 5G services in the region, especially in nations, such as the U.S. and Canada. Moreover, according to the GSM Association (GSMA), the U.S. has observed full launch of 5G operations, whereas in Canada, the nation has observed multiple launches of 5G network.

On the other hand, the market in Asia Pacific is anticipated to grow at a significant pace on account of the presence of nations, such as China, Australia, Japan and others, where 5G services have been launched commercially. Additionally, presence of numerous network equipment providers in the region has contributed to the greater adoption of 5G services at a lower CapEx by the telecom operators.

The global O-RAN Near-Real-Time RAN intelligent controller (Near-RT-RIC) market is further classified on the basis of region as follows: