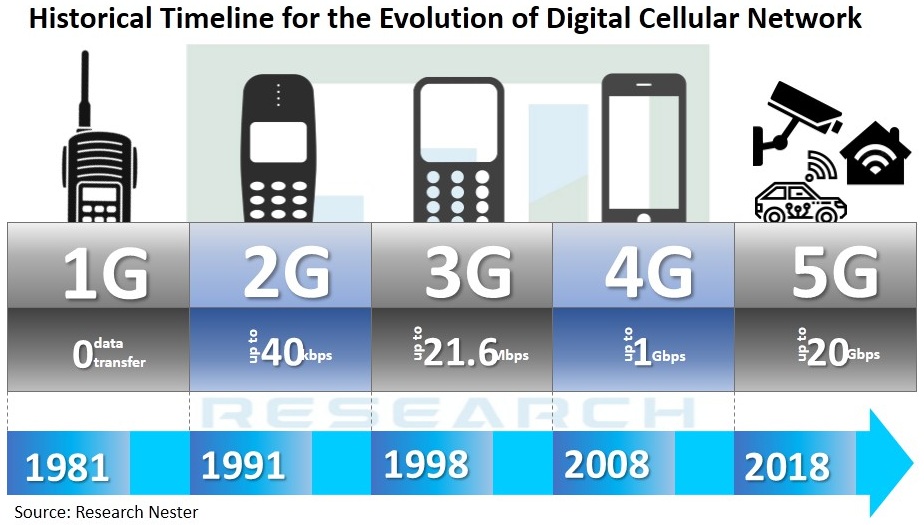 The global 5G technology market is anticipated to grow on the back of rising need for high speed internet and data connectivity amongst consumers around the globe. The journey of digital transformation over the years have significantly helped industries to advance in modernizing their existing processes and thereby exhibit growth in their revenues. Moreover, technological concepts, such as artificial intelligence, internet of things (IoT) and others are also anticipated to contribute towards the growth of the global 5G technology market over the coming years. According to The Mobile Economy Report 2019 of The GSM Association the number of global IoT connections in-between 2018 and 2025 is anticipated to triple to 25 billion connections, whereas IoT revenue to reach USD 1.1 trillion. Additionally, the report also stated that over 710 million people were expected to subscribe to mobile services, and 5G technology to contribute to merely 15% of the overall technology mix by the end of 2025. 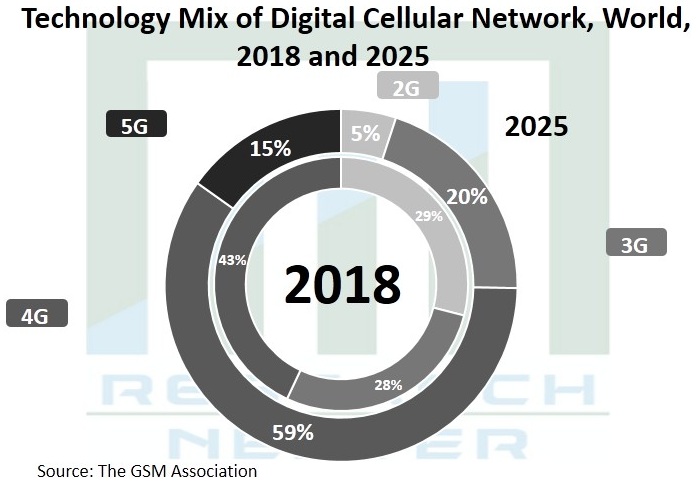 The market is anticipated to record a CAGR of 73.61% throughout the forecast period, i.e. 2020-2028. The global 5G technology market is segmented by application into manufacturing & utilities, professional & financial services, public services, ICT & trade, agriculture & mining and others, out of which, manufacturing & utilities segment is anticipated to hold the largest market share owing to growing trend of industrial internet of things (IIoT) and revolutionary deployment of wireless connectivity and sensors to comply with the rising trend of Industry 4.0. Growing need amongst industries in the manufacturing sector to automate industrial processes by inducing cloud computing, AI and IoT is helping to contribute towards the growth of the segment in the global 5G technology market. According to another statistical data stated in The Mobile Economy Report 2019 of The GSM Association, 5G technology is anticipated to contribute nearly USD 2.2 trillion to the global economy by 2034 at a GDP growth rate of 5.3%. Moreover, manufacturing & utilities to contribute nearly 35% of the share of the economy to 5G technology, followed by professional & financial services with 29%. CLICK TO DOWNLOAD SAMPLE REPORT 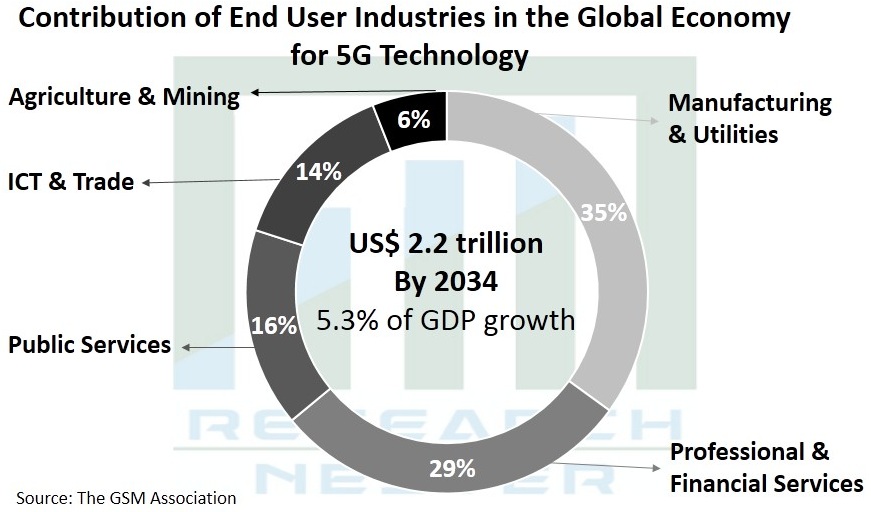 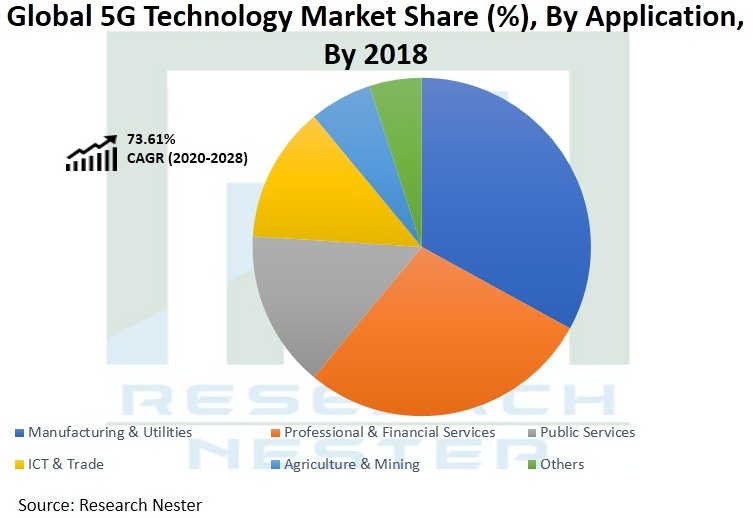 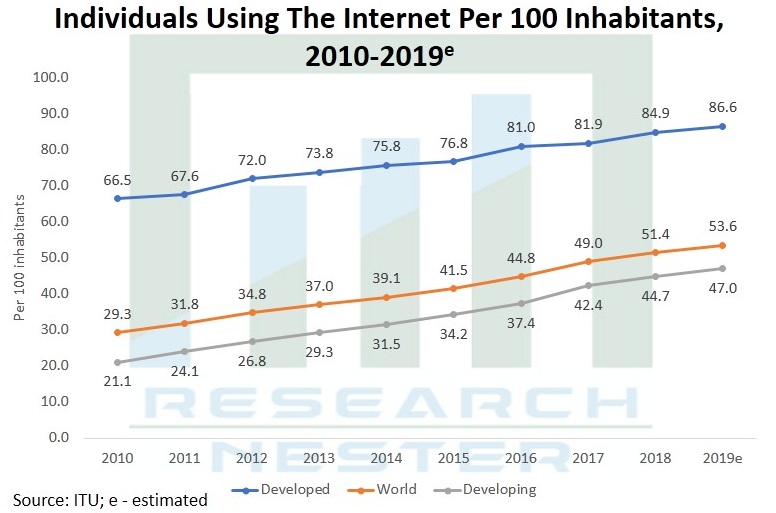 Owing to the rising demand for access to high speed internet amongst the growing internet users, telecom operators around the globe, particularly in developed and developing nations are increasingly investing for the deployment of 5G infrastructure. With 5G now being a reality post commercial launches in nations such as U.S. and South Korea in the year 2018, several other nations are lined up for the launch of 5G networks in the coming years. Apparently, mobile handset manufacturing companies are gearing up their speeds to release 5G smartphones and keep pace with the ongoing trend. According to The Mobile Economy Report 2019 of The GSM Association, mobile operators around the globe planned to invest around USD 480 billion between 2018 and 2020 in mobile capex so as to support the generational shift and further drive consumer engagement in the digital era.

Development of Supportive Policies By Governments For Digital Advancement

Governments of nations around the globe are actively engaging for the advancements in mobile networks of the digital future. Designing supportive policies and enabling them so as to avoid any threats associated with the digital advancements are some of the key focus areas that are outlooked by the government. Moreover, government are also taking priorities for the allocation of spectrum in sufficient amount for 5G technology as it requires larger continuous blocks of spectrum in the mid-range and mmWave frequency bands. Additionally, telecom operators are also encouraging the governments of nations to facilitate access to public sites for operators to deploy network equipment. Government are also further focusing on reducing sector-specific tax burden along with creating several incentives for technological innovations so as to encourage greater investments by telecom operators. Such factors are anticipated to drive the growth of the global 5G technology market in the upcoming years.

Delay in Standardization of Spectrum Allocation

Several developing nations around the globe are yet to keep pace with the ongoing trends of 5G technology. Owing to such a factor, allocation of spectrum frequency bands for 5G technology infrastructure and standardization processes and regulations can be delayed hampering the telecom associated companies to roll out 5G related networks, devices and related technological products. Such a factor is anticipated to hinder the growth of the global 5G technology market during the forecast period.

Our in-depth analysis of the global 5G technology market includes the following segments:

North America market is anticipated to hold the largest market share on the back of growing popularity of consumer electronic devices with applications that are dependent on high-speed network, along with shifting trend amongst consumers towards the adoption of 5G technology. Furthermore, Europe market is anticipated to gain significant market share in the upcoming years. According to The Mobile Economy Report 2019 of The GSM Association, North America is anticipated to contribute to the largest share of 47% for the technology mix in the year 2025, followed by Europe at 29%. 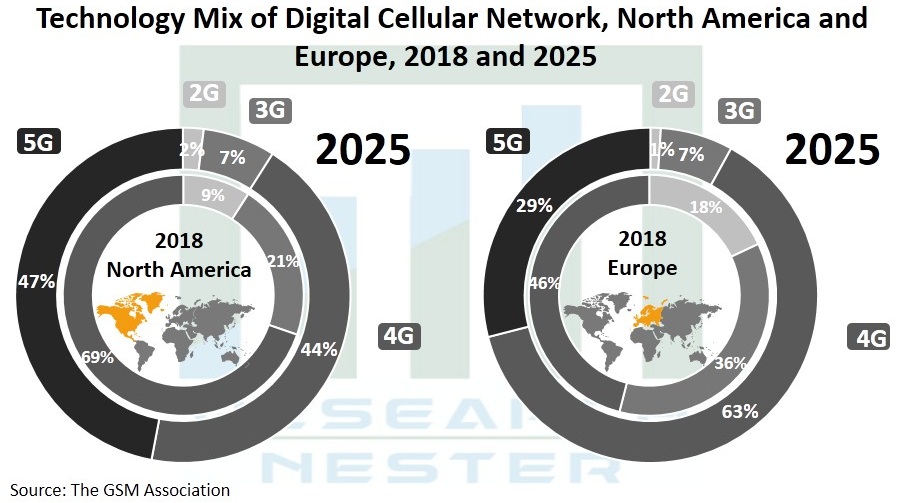 The global 5G technology market is further classified on the basis of region as follows: