The global nephrology lasers market is estimated to garner an average revenue by the end of 2033 by growing at a CAGR of ~12% over the forecast period, i.e., 2023 – 2033. Further, the market generated a modest revenue in the year 2022. The growth of the market can primarily be attributed to the growing concern of various diseases globally, which is responsible for increasing expenditure on healthcare services worldwide. According to the Centers for Medicare & Medicaid Services, the National Health Expenditure data (NHE), in the United States in 2020 grew 9.7% to ~USD 4.1 trillion, which accounted for 19.7% of Gross Domestic Product (GDP). 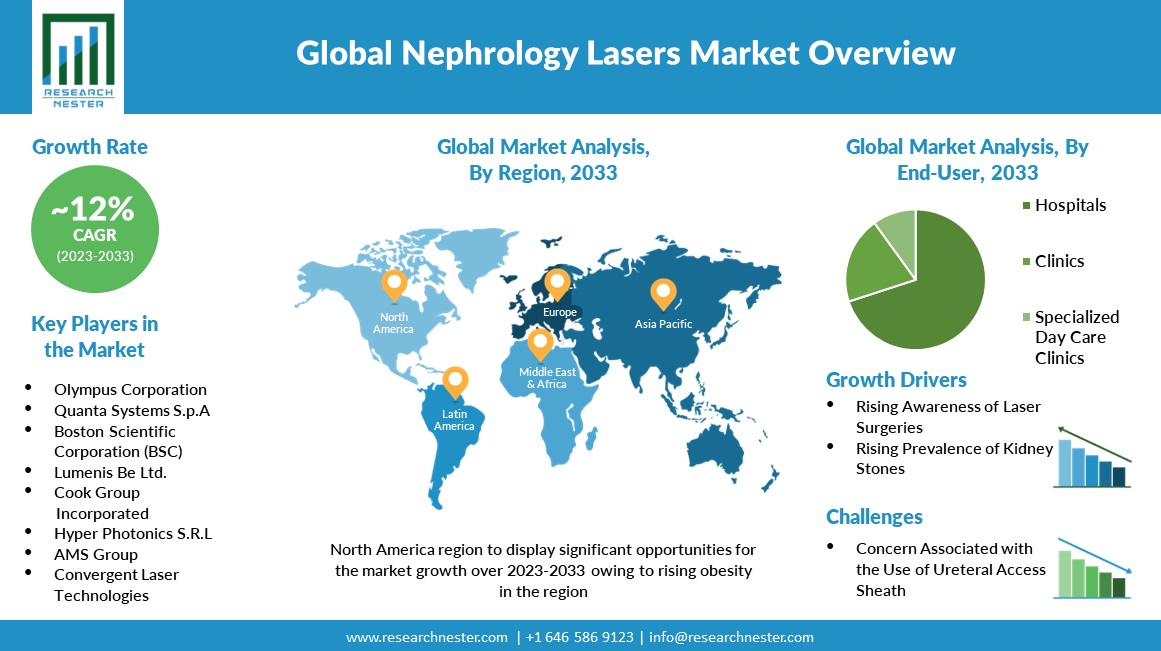 Nephrology lasers are used in endoscopic surgery of the kidneys via ureteroscopy. A commonly used method today is fragmentation and retrieval, wherein direct access to the kidney is allowed through inserting the ureteral access sheath. It also eases the movement of the endoscope in the ureter. To locate and fragment kidney stones, a laser imbibed miniature ureteroscope is passed through the sheath, and a kidney stone is broken into pieces of less than 3mm and then retrieved by retrieval devices. The nephrology lasers market during the forecast period is expected to create massive revenue generation opportunities for the key players owing to the advancements in laser devices used in lithotripsy and the rising prevalence of kidney stone diseases worldwide. It was observed that, in the United States, the prevalence of kidney stones exhibited a steady growth from ~6% to ~9% between the 2007-2008 cycle and the 2017-2018 cycle, respectively.

The global nephrology lasers market is segmented and analyzed for demand and supply by end-user into hospitals, clinics and specialized day care clinics. Among these segments, the hospital segment is expected to generate the most revenue by the end of 2033, owing to rising healthcare infrastructure and the increasing number of jobs generated in the healthcare sector globally. It was found that, in the year 2020, the National Health Service (NHS) in the United Kingdom healthcare sector provided employment to more than 1.5 million people.

Regionally, the global nephrology lasers market is studied into five major regions including North America, Europe, Asia Pacific, Latin America and Middle East & Africa region. Amongst these, the market in North America is projected to hold the largest market share by the end of 2033. The forecast is backed by rising number of obese people in the region resulting into increasing medical cost spent on obesity. According to the Centers for Disease Control and Prevention (CDC) data, in the year 2019, annual estimated medical cost of obesity was ~USD 173 billion, in the United States. 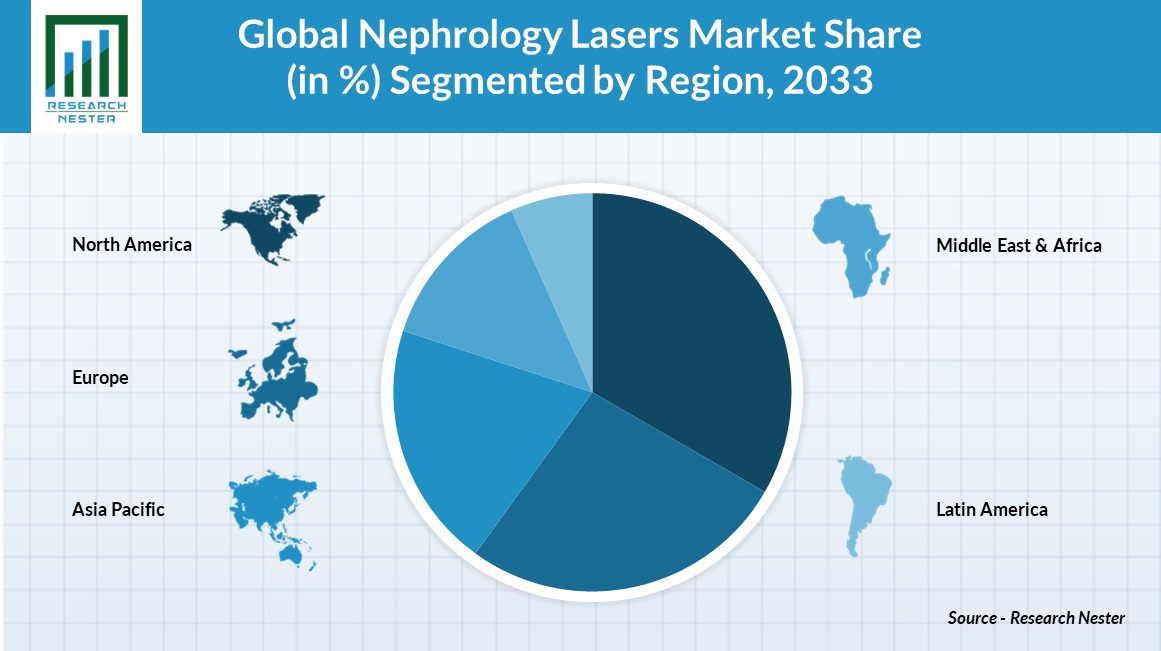 The global nephrology lasers market is further classified on the basis of region as follows:

Our in-depth analysis of the global nephrology lasers market includes the following segments:

What are the major factors driving the growth of the nephrology lasers market?

What would be the CAGR of nephrology lasers market over the forecast period?

What are the challenges affecting the nephrology lasers market growth?

The concern associated with the use of ureteral access sheath, along with the possibility of bladder or urethral muscle spasms are some of the factors estimated to hamper the market growth.

Which region will provide more business opportunities for growth of nephrology lasers market in future?

Who are the major players dominating the nephrology lasers market?

What are the segments in the nephrology lasers market?

The market is segmented by product type, mechanism, technique, end-user, and by region.

Which segment captures the largest market size in end-user segment in the nephrology lasers market?

The hospital segment is anticipated to garner the largest market size by the end of 2033 and display significant growth opportunities.