The global lung biopsy systems market is estimated to garner remarkable revenue by the end of 2031 by growing at a CAGR of ~15% over the forecast period, i.e., 2022 – 2031. Further, the market generated significant revenue in the year 2021. The growth of the market is primarily attributed to the higher prevalence of lung cancer across the globe. A report published by World Health Organization (WHO) stated that in 2020, around 10 million people died due to lung cancer which was summed up to be 1 in 6 deaths. 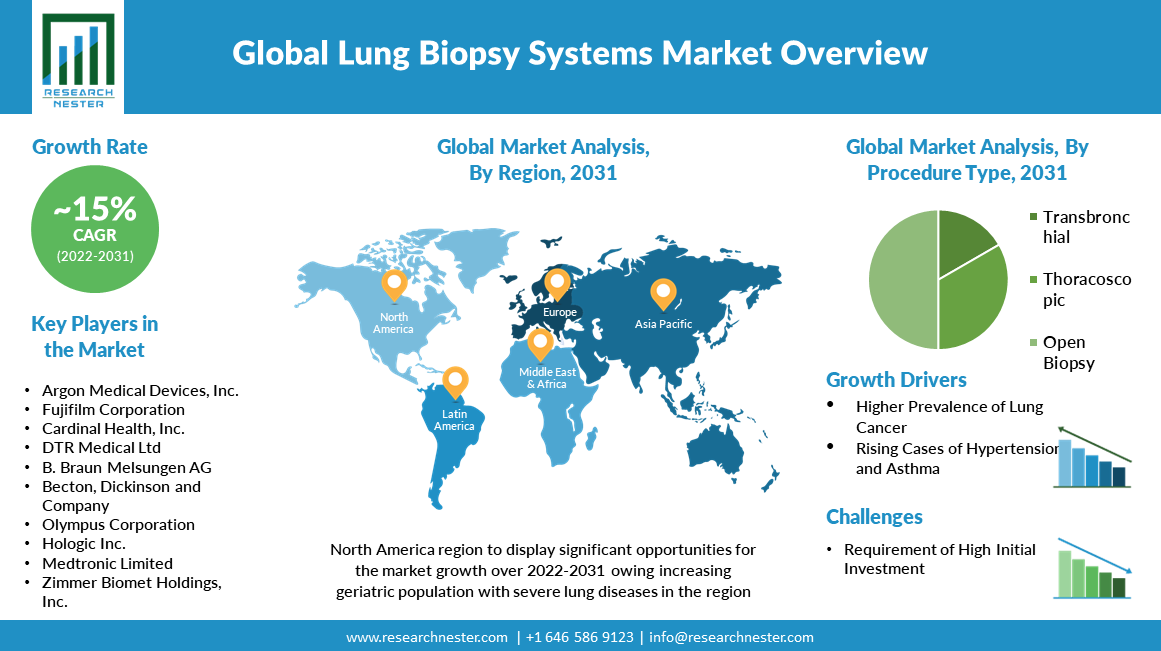 Furthermore, the global lung biopsy systems market is projected to grow on the back of rising cases of hypertension and asthma over the forecast period. Another report published by the World Health Organization showed that in 2019, about 262 million people were found to be affected by asthma. Additionally, the market is anticipated to enlarge its size owing to the growing inclination of the global population toward minimally invasive surgeries. Minimally invasive surgeries come under the ongoing advancement of the medtech industry and it is performed by delivering less damage to the body with the assistance of enhanced medical equipment. For instance, medical technology was estimated to grow by an annual rate of approximately 5% in 2021.

As per the report published by the World Health Organization, in 2019, COPD accounted to cause 3.23 million deaths across the globe.

COPD, a chronic obstructive pulmonary disease, is considered an inflammatory lung disease that is responsible for the interrupted airflow from the lungs and can result in the death of the affected person. COPD requires quick medical attention and early diagnosis to be cured thoroughly.

Based on the report provided by the World Health Organization (WHO), it was stated that in 2019, more than 1 billion people were living with hypertension globally summing up to 82% of the entire population.

Data published by the American Lung Association showed that in 2018, about 9.0 million individuals aged 18 or above were living with chronic bronchitis.

Another report published by the World Health Organization demonstrated that around 290,000 to 650,000 people die annually due to respiratory diseases.

The global lung biopsy systems market is segmented and analyzed for demand and supply by procedure type into transbronchial, thoracoscopic, and open biopsy, out of which, the open biopsy segment is anticipated to hold the notable share in the global lung biopsy systems market during the forecast period on account of the higher number of patients receiving it. Open lung biopsy is the most common type of biopsy that is performed to check for the sigh of diseases in the lungs. It is observed that about 0.5 million bronchoscopies are performed every year solely in the USA.

Regionally, the global lung biopsy systems market is studied into five major regions including North America, Europe, Asia Pacific, Latin America and Middle East & Africa region. Amongst these markets, the market in the North America region is estimated to witness remarkable growth over the forecast period on the back of a higher patient pool and an increasing geriatric population with severe lung diseases. Based on the data provided by the World Bank, the number of people aged 65 and above in the United States and Canada in 2020 was stated to be 55,131,698 and 6,886,393 respectively. Additionally, the presence of an enhanced and well-structured healthcare system in North America is also projected to propel market growth over the forecast period. In North America people are more aware of their health, hence, a significant inclination of the global population toward the early diagnosis of lung diseases is anticipated to be another major growth driver of the market during the forecast period. 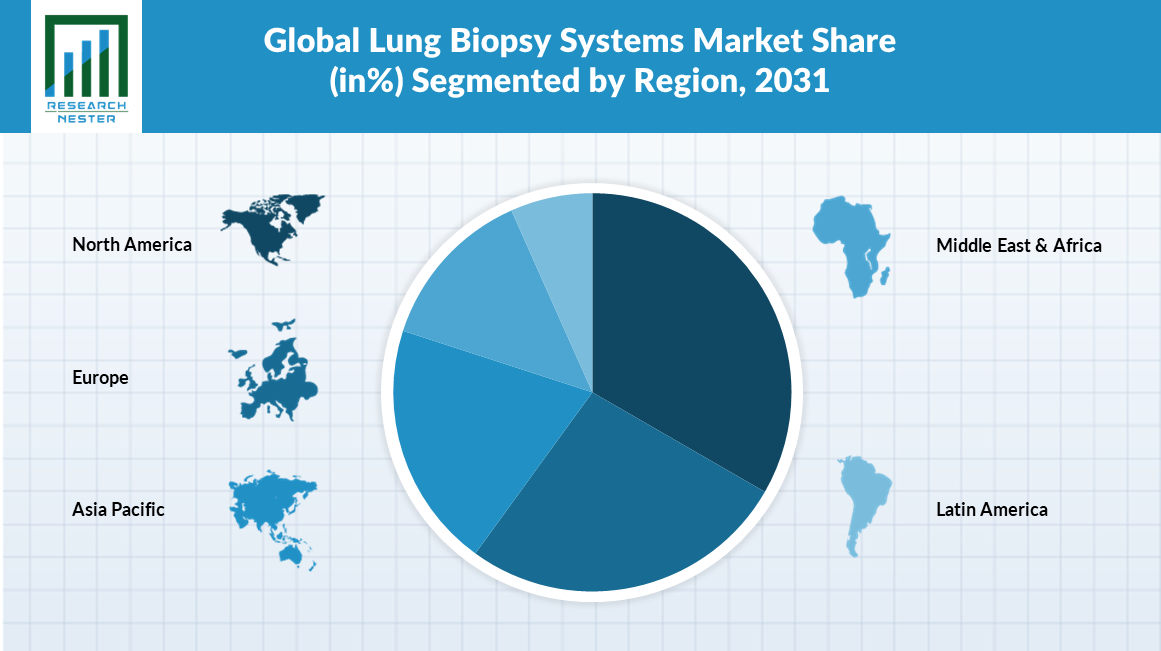 The global lung biopsy systems market is further classified on the basis of region as follows: 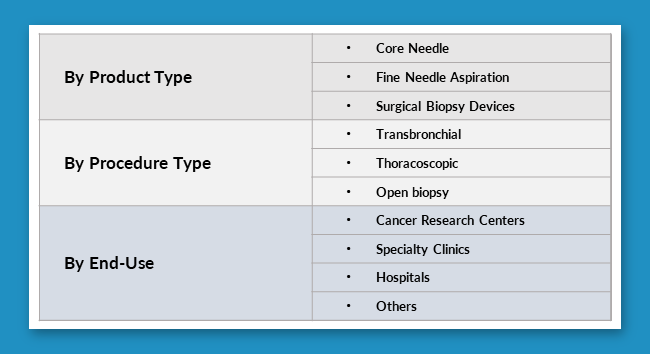 What are the major factors driving the growth of the lung biopsy systems market?

Escalating prevalence of cancer and rising cases of hypertension and asthma are estimated to majorly boost the market growth.

What would be the CAGR of lung biopsy systems market over the forecast period?

What are the challenges affecting the lung biopsy systems market growth?

The requirement of high initial investment and lack of skilled medical professionals are estimated to challenge the market growth.

Which region will provide more business opportunities for growth of lung biopsy systems market in future?

The market in the North America region is projected to hold the largest market share by the end of 2031 and provide more business opportunities in the future.

Who are the major players dominating the lung biopsy systems market?

What are the segments in the lung biopsy systems market?

The market is segmented by product type, procedure type, end-use and by region.

Which segment captures the largest market size in procedure type in the lung biopsy systems market?

The open biopsy segment is anticipated to garner the largest market size by the end of 2031 and display significant growth opportunities.