Beta-agonists are bronchodilator medicines that can relax the muscles around the airways and opens the airways, which are tightened during an asthma attack. Long-acting beta-agonists have a longer effect, which is up to 12 hours, as compared to the 4-5 hour effect of the regular beta-agonists. This longer lasting relief provide by the long-acting beta-agonists is estimated to boost their demand amongst the patients of nocturnal asthma, exercise-induced asthma, and COPD (chronic obstructive pulmonary disease). The growth of the market can be attributed to the increasing prevalence of COPD and asthma across the globe. According to the data by the World Health Organization (WHO), COPD is the third leading cause of death worldwide, which caused 3.23 million deaths in 2019. On the other hand, asthma caused 461,000 deaths in 2019, affecting over 262 million people in the same year. Moreover, the advancement in the field of medicine, and increasing demand for chronic respiratory disease treatment, are also estimated to boost the market growth. Apart from this, the prevalence of poor lifestyle, including consumption of tobacco, increased level of pollution, sedentary life, obesity, and higher exposure to allergens, which is leading to respiratory diseases, are also estimated to assist the market growth. 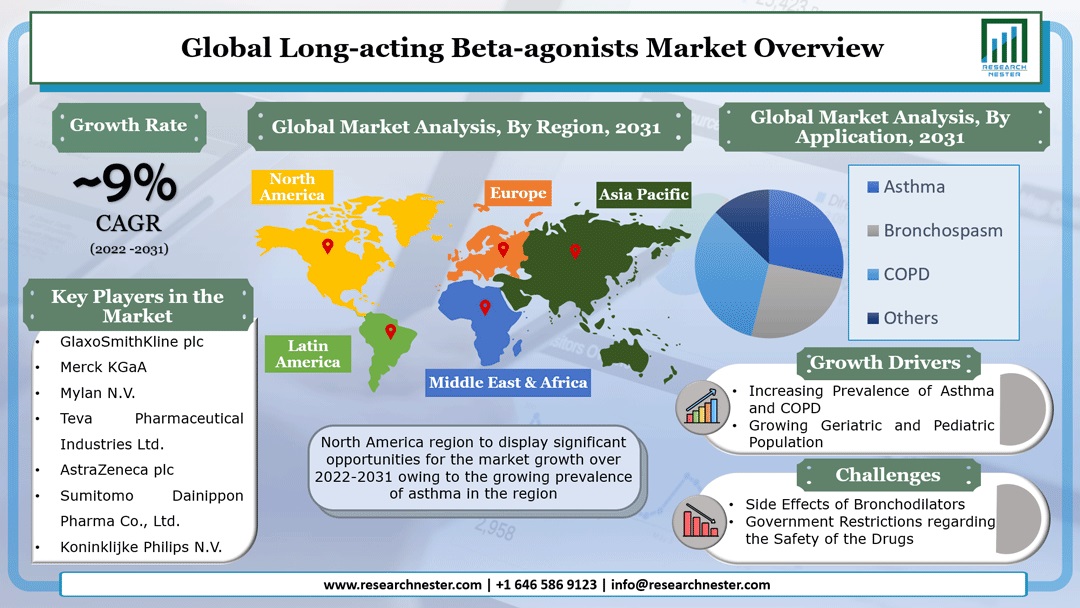 The market is segmented by drug type into albuterol, formoterol, salmeterol, and others, out of which, the formoterol segment is anticipated to hold a substantial share in the global long-acting beta-agonists market over the forecast period owing to the longer-lasting action of formoterol-based compositions. Moreover, formoterol is administered as an inhalation powder, which has the maximum relief effect. Such factors are expected to encourage the segment growth.

On the basis of geographical analysis, the global long-acting beta-agonists market is segmented into five major regions including North America, Europe, Asia Pacific, Latin America and Middle East & Africa region. The market in Asia Pacific region is estimated to witness noteworthy growth over the forecast period on the back of high prevalence of COPD, bronchospasm, and other disorders amongst the geriatric population. Further, asthma and other respiratory diseases are more common amongst the pediatric and geriatric population. The high population of older adults and children in the APAC region is estimated to boost the market growth.

The market in the North America region is anticipated to gain the largest market share throughout the forecast period owing to the high incidences of asthma amongst children. As per the data by the Center for Disease Control and Prevention (CDC), 6 million children below 18 years have asthma, in the U.S. 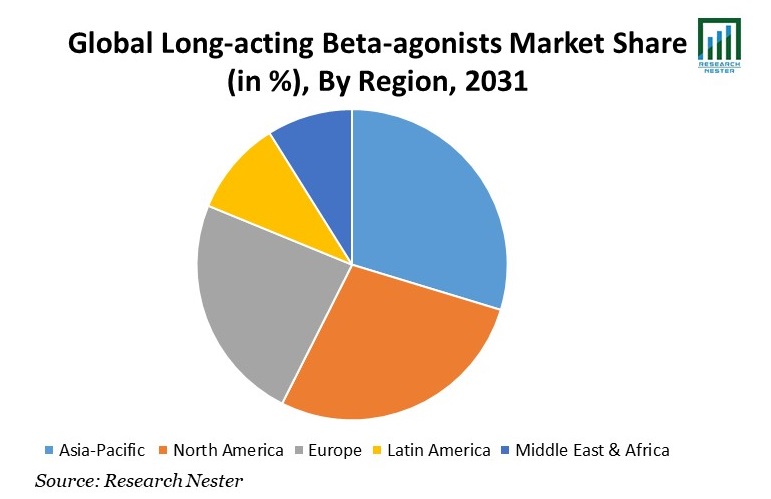 The global long-acting beta-agonists market is further classified on the basis of region as follows:

Our in-depth analysis of the global long-acting beta-agonists market includes the following segments:

1) What are the major factors driving the growth of the long-acting beta-agonists market?

Ans: Increasing prevalence of asthma and COPD globally is anticipated to boost the market growth.

2) What would be the CAGR of long-acting beta-agonists market over the forecast period?

3) What are the challenges affecting the long-acting beta-agonists market growth?

Ans: Side effects caused by bronchodilators are estimated to hamper the market growth.

4) Which region will provide more business opportunities for growth of long-acting beta-agonists market in future?

Ans: The North America region is anticipated to provide more business opportunities over the forecast period owing to the growing prevalence of asthma in the region.

5) Who are the major players dominating the long-acting beta-agonists market?

7) What are the segments in the long-acting beta-agonists market?

Ans: The market is segmented by route of administration, drug type, application, and by region.

8) Which segment captures the largest market size in application segment in the long-acting beta-agonists market?

Ans: The COPD segment is anticipated to hold largest market size over the forecast period and display significant growth opportunities.