·    July 2020- Panasonic’s electric vehicle battery business in the United States announced that it will increase the energy density of the 2170 battery supplied to Tesla by 20 percent within 5 years.

·    February 2019- BYD introduced a next generation lithium iron phosphate battery technology for its warehouse equipment and forklifts, which is maintenance free and highly cost-effective.

The global lithium iron phosphate (LiFePO4) battery market is estimated to garner a substantial amount of revenue and grow at a CAGR of ~15% over the forecast period, i.e., 2022 – 2030. The growth of the market can be attributed to the increasing demand for electric and hybrid vehicles, and growing focus on energy storage applications around the world. According to the International Energy Agency, the global electric car stock hit the mark of 10 million in 2020, which is a 43 percent increase over 2019. Battery electric vehicles accounted for two thirds of the car stock that same year.

Along with these, high requirement of lithium iron phosphate batteries in battery energy storage systems, and rising concerns associated with the environment are also expected to boost the market growth in the upcoming years. Furthermore, rapidly increasing population, coupled with an upsurge in depletion in fossil fuel reserves are projected to offer abundant opportunities for market progress in the near future. 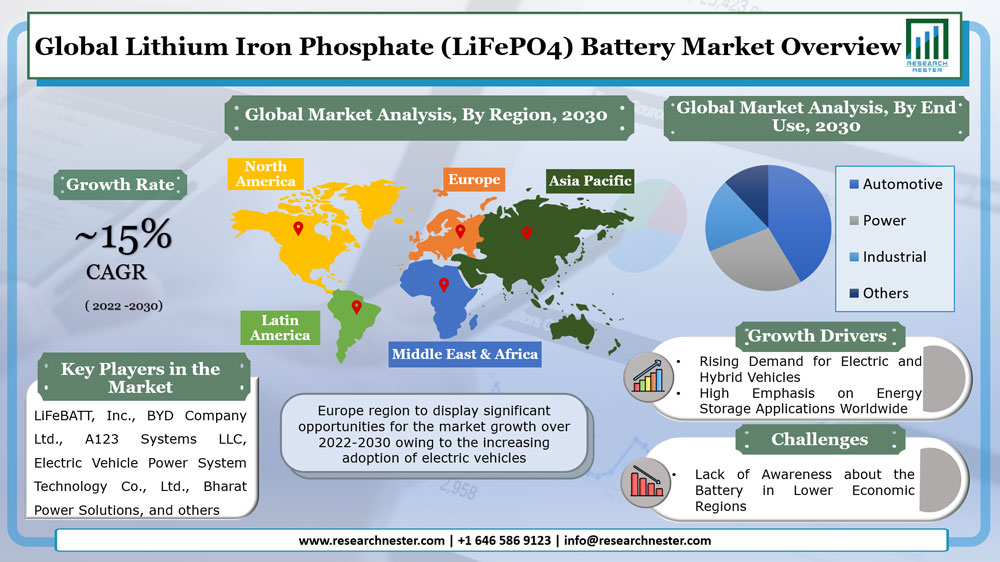 The market is segmented by power capacity into 0–16,250 mAh, 16,251–50,000 mAh, 50,001–100,000 mAh, 100,001–540,000 mAh, out of which, the 100,001-540,00 mAh segment is anticipated to hold the largest share in the global lithium iron phosphate (LiFePO4) battery market. This can be accounted to the high usage of batteries with this capacity in different types of electric vehicles such as hybrid and plug-in hybrid electric vehicles. Additionally, on the basis of end use, the automotive segment is assessed to acquire the largest share during the forecast period, which can be credited to the growing demand for automobiles from emerging countries, namely China and India. Apart from this, rise in technological advancements to develop effective battery energy storage systems that are able to augment vehicle efficiency is also predicted to propel the segment’s growth in the imminent time. CLICK TO DOWNLOAD SAMPLE REPORT

On the basis of geographical analysis, the global lithium iron phosphate (LiFePO4) battery market is segmented into five major regions including North America, Europe, Asia Pacific, Latin America and the Middle East & Africa region. The market in Europe is estimated to witness noteworthy growth over the forecast period on the back of the rising adoption of electric vehicles, and deployment of government policies favoring the development of advanced battery technologies in the region, such as renewable battery storage. Moreover, the market in Asia Pacific is predicted to occupy the most significant share over the forecast period ascribing to the growing demand for consumer electronics from China, India and Japan, and presence of well-established automotive sector in the region. For instance, the number of users of consumer electronics are calculated to grow up to more than 840 million by 2025. The user penetration is expected to reach about 57 percent by the end of the same year. In addition, escalating adoption of stringent emission laws is also projected to bolster the region’s market growth in the coming years. 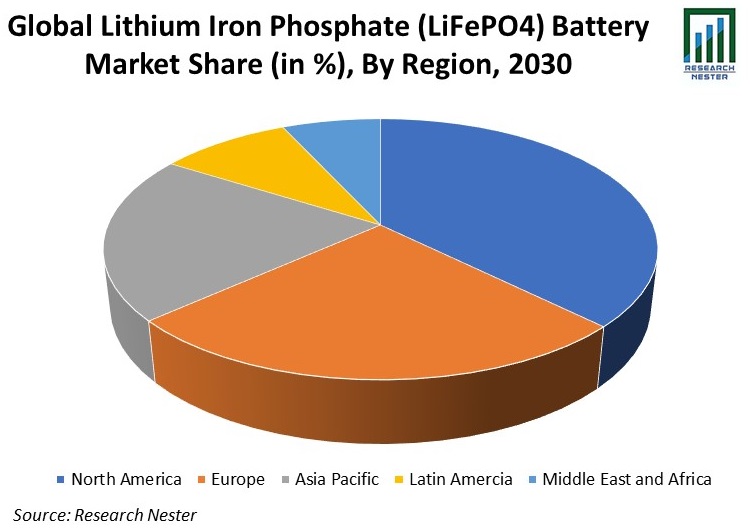 The global lithium iron phosphate (LiFePO4) battery market is further classified on the basis of region as follows:

What are the major factors driving the growth of the lithium iron phosphate (LiFePO4) battery market?

What would be the CAGR of lithium iron phosphate (LiFePO4) battery market over the forecast period?

What are the challenges affecting the lithium iron phosphate (LiFePO4) battery market growth?

Less awareness about the battery in lower economic regions is estimated to hamper the market growth.

Asia Pacific will provide more business opportunities for market growth owing to the rising adoption of electric vehicles, and deployment of government policies favoring the development of advanced battery technologies in the region.

Who are the major players dominating the lithium iron phosphate (LiFePO4) battery market?

What are the segments in the lithium iron phosphate (LiFePO4) battery market?

The market is segmented by power capacity, application, end use, and by region.

Which segment captures the largest market size in the end use segment in the lithium iron phosphate (LiFePO4) battery market?

The automotive segment is anticipated to hold largest market size and is estimated to grow at a significant CAGR over the forecast period and display significant growth opportunities.

Steam Generator Market Segmentation by Rated Power (Up To 30 MW, 31-100 MW, and Above 100 MW); by Material (Martensitic, Ferritic, Austenitic, and Others); and by End User (Utilities, Chemicals, Pharmaceutical, Refineries, Pulp & Paper, and Others) – Global Demand Analysis & Opportunity Outlook 2030