The global industrial wastewater treatment market is estimated to grow at ~6% CAGR over the forecast period, i.e., 2022–2030. The growth of the market can be attributed to the increasing industrialization, which generates massive amount of liquid waste, along with the increasing environmental awareness amongst people. According to a report by the World Health Organization WHO, 785 million people across the globe lack basic drinking-water service, while at least 2 billion people use a drinking water source that is contaminated with faecal matters. Owing to the growing global population, the demand for drinking water is bound to increase, but the shortage of safe drinking water is exponentially increasing due to the water pollution caused by dumping of industrial waste in natural water bodies. According to the report by the Natural Resources Defense Council (NRDC), every year, unsafe water sickens about 1 billion people, majorly in the low-income countries. Moreover, the same report stated that more than 80% of the world’s wastewater flows back into the environment without being treated. The growing awareness amongst people, and government authorities, regarding the conservation of safe drinking water, is estimated to boost the growth of the market. Moreover, government norms and regulations on various sectors for the mandatory treatment of the wastewater is another major factor estimated to drive the market growth. 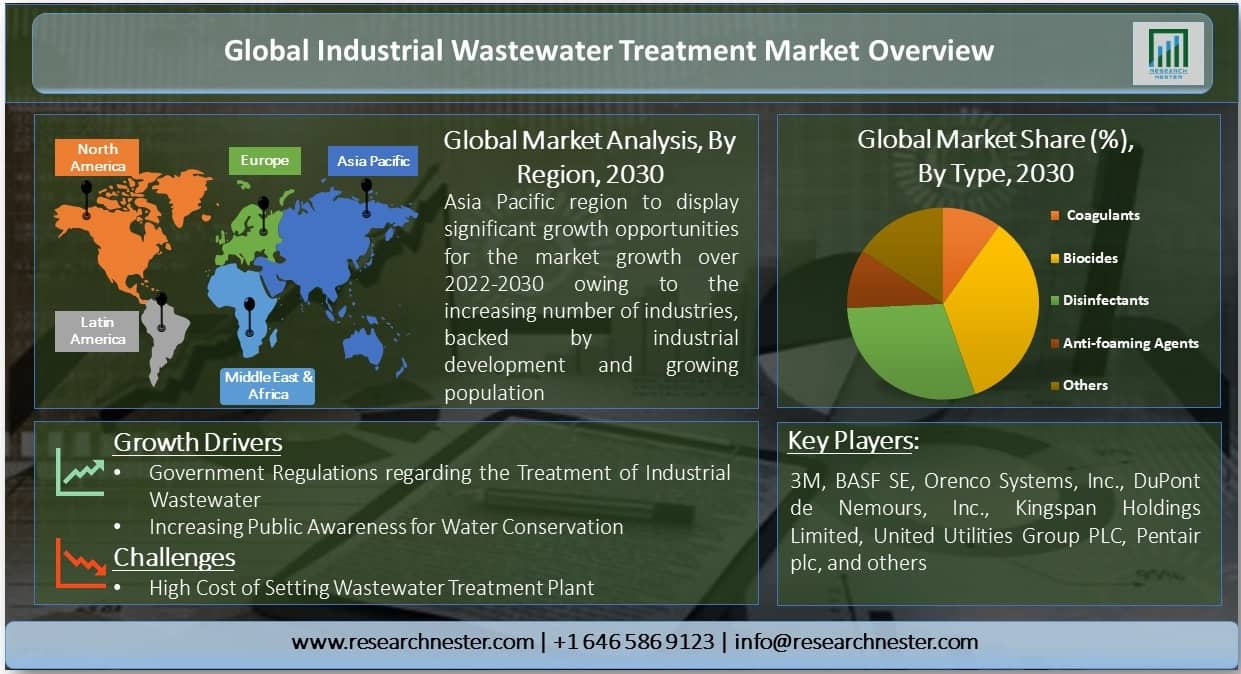 The market is segmented by type into coagulants, biocides, disinfectants, anti-foaming agents, and others, out of which, the biocides segment is anticipated to hold the largest share in the market during the forecast period on account of its ability to neutralize maximum disease-causing microorganisms, without making the water toxic. The increasing use of biocides to treat the wastewater from food and beverage industry is estimated to boost the segment growth.

On the basis of end user industry, the market is segmented into power generation, mining, chemical, and others, out of which, the power generation segment is anticipated to gain the largest revenue share over the forecast period, owing to the increasing demand for power, backed by rapid urbanization. Water is a major component for the production of electricity, and the process also releases enormous amounts of wastewater. Strict government regulations for the power generation industry, is another major factor for the segment growth. CLICK TO DOWNLOAD SAMPLE REPORT

Regionally, the global industrial wastewater treatment market is segmented into five major regions including North America, Europe, Asia Pacific, Latin America and Middle East & Africa region. The market in Asia Pacific region is estimated to garner largest share over the forecast period on the back of increasing number of industries, including, the power generation, mining, food & beverage, pulp & paper, chemical, consumer electronic, and textile industries, which generate massive amount of wastewater that requires treatment. As per the data by the Global Water Forum, 42% of the deaths associated with unsafe supply of water, and sanitation, occur in the Asia-Pacific region. Moreover, growing government initiatives, along with rapid industrial development in the APAC region is estimated to boost the regional market growth.

The market in the North America region is estimated to hold notable market share over the forecast period owing to increasing industrialization, along with higher awareness amongst the population of the developed nations, such as, Canada and the US. Along with this, the stringent government policies for the treatment of wastewater are another major factor estimated to boost the market growth. 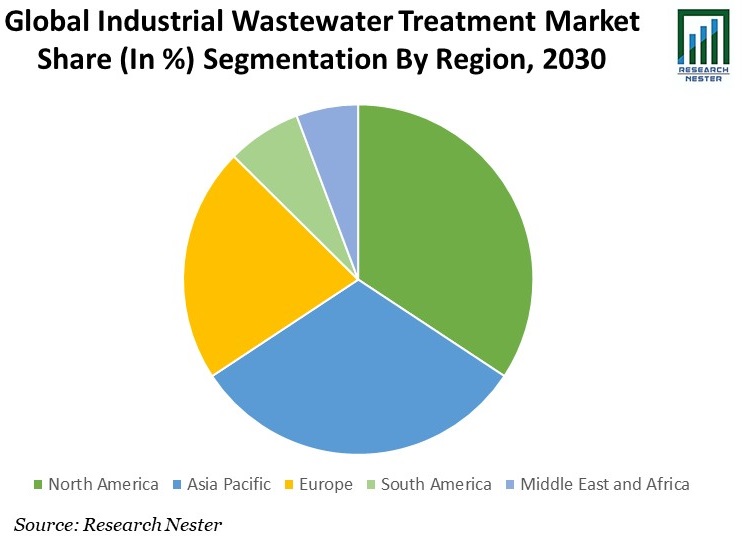 The global industrial wastewater treatment market is further classified on the basis of region as follows:

What are the major factors driving the growth of the industrial wastewater treatment market?

Rising government regulations for the treatment of industrial wastewater, and growing environmental concerns are the major factors driving the market growth.

What would be the CAGR of industrial wastewater treatment market over the forecast period?

What are the challenges affecting the industrial wastewater treatment market growth?

High cost of wastewater treatment plants is one of the major factors estimated to hamper the market growth.

Which region will provide more business opportunities for growth of industrial wastewater treatment market in future?

The market in the Asia Pacific is estimated to provide most growth opportunities owing to the presence of various industries in the region, backed by industrial development and growing population.

Who are the major players dominating the industrial wastewater treatment market?

What are the segments in the industrial wastewater treatment market?

The market is segmented by type, technology, end user industry, and by region.

Which segment captures the largest market size in the end-user industry segment in the market?

The power generation segment is anticipated to hold largest market size on the back of increasing use of water for the generation of electricity, to meet the growing power demand.