Sodium chloride (NaCl), commonly known as salt, occurs in the form of cubic crystals and is used in large quantities across various industrial applications.

It is the basic compound required in the human body for absorbing and transporting nutrients, maintaining blood pressure and the right balance of fluid, transmitting nerve signals and helps in contracting & relaxation of muscles. NaCl is used as an additive to prevent food from spoilage, also in fermenting processes in the food industry.

Significant demand for industrial sodium chloride comes from chlor-alkali industry for its consumption as a primary feedstock to produce caustic soda, chlorine and soda ash. These products are then used in the manufacturing of different end user products such as detergents, soaps, dyes, glass and PVC. The earliest technique used for the production of sodium chloride was the evaporation of seawater by sun-heat, which is majorly suited for hot and dry regions near salty lakes or the ocean. Sea water is considered as an unlimited source for sodium chloride production, however the differentiation in favorable soil and weather conditions affects its commercial production along the coastline.

Sodium chloride is used in many other applications such as in chemical intermediates, water treatment, deicing, animal feed additive. Salt acts as an ion-exchange resin, which helps soften the water used in water treatment plants. Sodium chloride is additionally used as a flavoring agent and food preservative agent as it presents properties such as taste enhancer, distinct flavor, color and pleasant aroma.

The factor that drive the industrial sodium chloride market is the increasing demand for chlor-alkali, e.g. consumption of chlorine in ethylene dichloride production, etc. Increasing demand and consumption of preserved food items along with demand for NaCl as a chemical reagent and growing demand for pharmaceutical grade sodium chloride are some of the other factors that boosts the market. In addition, low-cost and simplicity of the solar evaporation production process catalyze the market growth from the supply side. 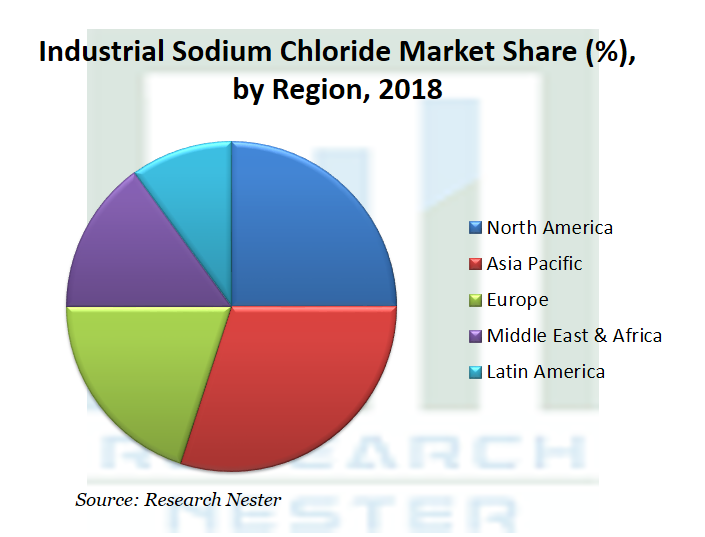 Asia-Pacific is the dominating region in terms of consumption and production of sodium chloride, with China reported for more than one-fourth of the market share owing to its increasing demand for water treatment, chemical, and food & beverage industries. North America is the second largest consumer of NaCl, in reference to its use in deicing. The consumption in deicing application varies substantially depending on climatic conditions.

Industrial sodium chloride Market is further classified on the basis of region as follows:

NaCl as a chemical reagent

The demand for NaCl is on the surge from the chemical industry, where it is widely used for the manufacturing of chlor-alkali products, such as chlorine, soda ash, and caustic soda. These products are further used for producing a wide range of products such as PVC, detergents, glass, dyes, and soaps. The rising demand for these products is expected to spur the demand for sodium chloride.

The F&B industry across the world is anticipated to increase substantially on the back of rising disposable income and change in food habits of consumers. In food sector, sodium chloride is used for seasoning, coloring, curing meats, preserving fish, etc. The medical application of sodium chloride is in catheter flush injections or intravenous infusions and also for cleaning objects such as contact lenses. Inhaling sodium chloride helps remove certain bacteria in body secretions.

Major market restraint has been the impact of sodium chloride on the water quality. This impact on environment has become a great concern as wildlife, vegetation and aquatic life are being affected, due to the chloride discharge into the water bodies. In addition, stringent regulations imposed by the government are restricting the market growth.