The global hydrogen vehicle market is estimated to grow at a significant CAGR over the forecast period, i.e., 2022 – 2030. The growth of the market can be attributed to the increasing research activities for the development of hydrogen as a fuel, along with growing adoption of clean fuel vehicles. Hydrogen is already being extensively used to power spacecrafts and aircrafts. The increasing development activities to use hydrogen in cars and other commercial vehicles is estimated to boost the market growth. According to the data by International Energy Agency, in 2020, hydrogen demand touched 90 Mt globally. 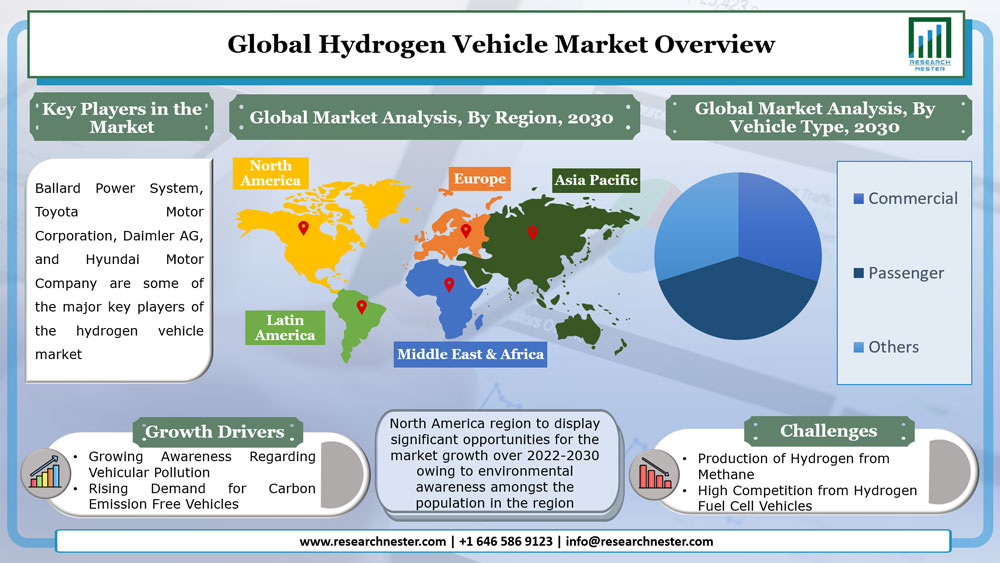 The increasing demand for fuel-efficient and low-emission vehicles is foreseen to strengthen the demand for hydrogen vehicles. The growing awareness regarding vehicular pollution is projected to further drive the market growth. As per a report by the UN Environment Program (UNEP), vehicle emissions are responsible for major share of fine particulate matter (PM2.5) and nitrogen oxides (NOx) in the atmosphere. According to the data the World Health Organization (WHO), over 7 million deaths are caused each year due to air pollution, as 99% of the global pollution breaths unhealthy air.

Moreover, hydrogen fuel cell vehicles are already present in various regional markets, and their demand is increasing gradually, which is expected to positively influence the market growth. Furthermore, the advantages of hydrogen vehicles, such as fast refueling time, long driving range on a single tank, and low carbon emission, is estimated to boost the market growth.

The market is segmented by vehicle type into commercial, passenger, and others, out of which, the passenger segment is anticipated to hold the modest share in the global hydrogen vehicle market over the forecast period on account of growing adoption of low-emission vehicles. The increasing production of hydrogen vehicles, is estimated to propel the segment growth.

On the basis of geographical analysis, the global hydrogen vehicle market is segmented into five major regions including North America, Europe, Asia Pacific, Latin America and Middle East & Africa region. The market in the North America region is anticipated to gain the largest market share throughout the forecast period owing to the presence of major automotive companies, which are investing in the development of hydrogen technology.

The market in the Asia Pacific region is estimated to witness noteworthy growth over the forecast period on the back of increasing adoption of low-emission vehicles in countries, such as, China and Japan. Moreover, China has the highest number of electric vehicles, as the government of the country constantly takes initiatives to curb pollution. 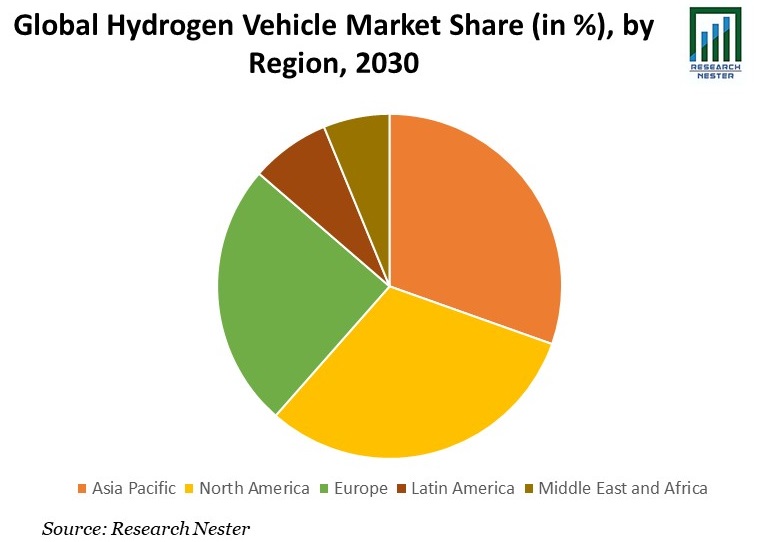 The global hydrogen vehicle market is further classified on the basis of region as follows:

Our in-depth analysis of the global hydrogen vehicle market includes the following segments:

Ballard Power System, Toyota Motor Corporation, Daimler AG, and Hyundai Motor Company are some of the major key players of the hydrogen vehicle market. GM Hydrogenics is one of the major manufacturers of hydrogen fuel cells, while automotive manufacturers, such as, BMW AG, are estimated to enter the market in the upcoming years.

1) What are the major factors driving the growth of the hydrogen vehicle market?

Ans: The growing demand for clean fuel, and adoption of hydrogen as fuel are estimated to boost the market growth.

2) What would be the CAGR of hydrogen vehicle market over the forecast period?

3) What are the challenges affecting the hydrogen vehicle market growth?

4) Which region will provide more business opportunities for growth of hydrogen vehicle market in future?

Ans: The market in the North America region will provide more business opportunities over the forecast period, owing to the growing environmental awareness amongst the population in the region.

5) Who are the major players dominating the hydrogen vehicle market?

7) What are the segments in the hydrogen vehicle market?

Ans: The market is segmented by vehicle type, and by region.

8) Which segment captures the largest market size in vehicle type segment in the hydrogen vehicle market?

Ans: The passenger segment is anticipated to hold notable market size over the forecast period and display significant growth opportunities.