The global hematology analyzers market is estimated to grow with a moderate CAGR during the forecast period, i.e., 2022-2030. The market for hematology analyzers is mainly projected to grow owing to factors such as the growing number of blood donations and rising incidences of blood disorders.  In 2018, more than 210,000 people were diagnosed with hemophilia, which increased up to about 324,000 in the year 2019. Moreover, the rising use of hematology analyzers in research and development activities in various areas such as pharmacogenomics, genetic therapies, bleeding disorders, stem cell research, and proteomics is also expected to propel market growth. Furthermore, factors such as the rise in public awareness and the consolidation of diagnostic laboratory chains are expected to drive the market growth in the forecast period. Additionally, the rising adoption rate of automated hematology instruments and integration of AI-based hematology analyzers combined with growing preferences towards high sensitivity hematology testing is also anticipated to drive the market growth in the near future. 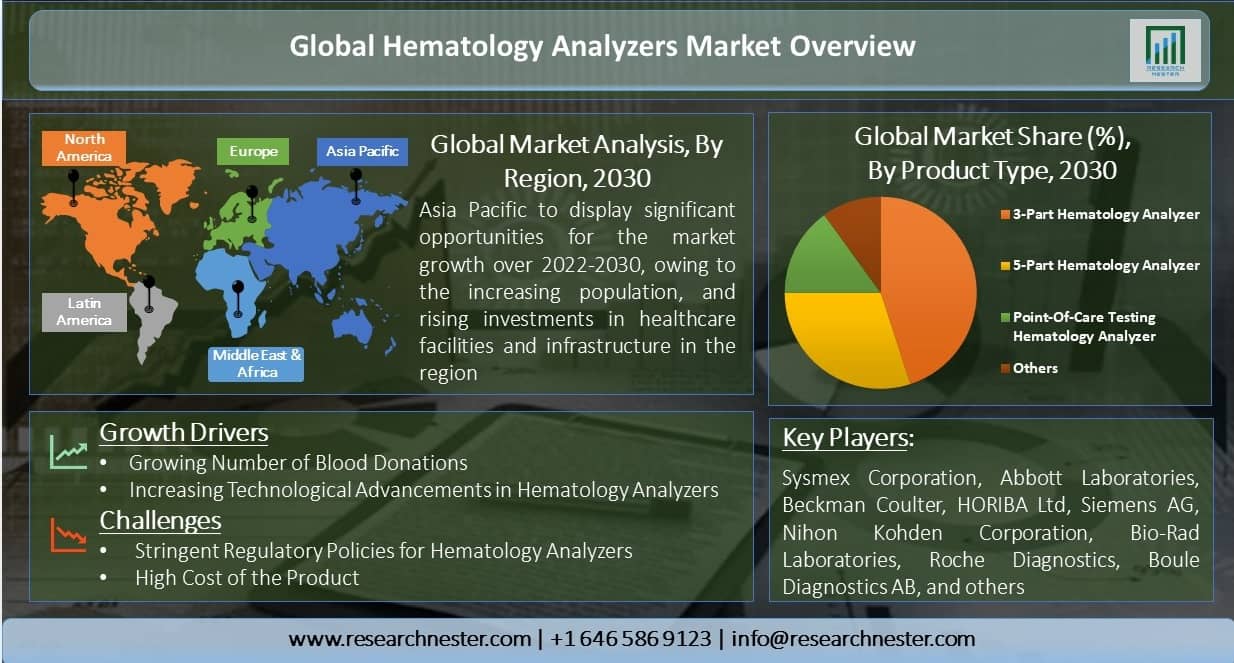 According to the statistics by the World Health Organization, the global per capita healthcare expenditure amounted to USD 1,064.74 in the year 2017. The worldwide healthcare expenditure per person grew from USD 864.31 in 2008 to USD 1,110.84 in 2018, where the U.S. is the top country that amounted to healthcare expenditure of USD 10, 623.85 per capita in 2018. As of 2018, the domestic general government healthcare spending in the U.S. was USD 5355.79, which grew from USD 3515.82 in 2008. These are some of the factors responsible for market growth over the past few years. Moreover, as per the projections by the Centers for Medicare & Medicaid Services (CMS), the estimated average annual percent change related to National Health Expenditures (NHE) in the U.S. was 5.2% in 2020 as compared to 2019 (4.5%). Furthermore, the National Health Expenditures are projected to reach USD 6,192.5 Billion in 2028, where the per capita expenditure is estimated to touch USD 17,611 in the same year. These are notable indicators that are anticipated to create lucrative business opportunities in upcoming years.

Geographically, the global hematology analyzers market is segmented into North America, Latin America, Europe, Asia Pacific and the Middle East & Africa region. The market in the Asia Pacific is predicted to grow at the highest CAGR over the forecast period. This can be attributed to the presence of emerging opportunities, mainly in the developing economies of China and India. Moreover, growing awareness regarding better health care facilities, rising occurrences of diseases, and increasing population in the countries are also expected to fuel the growth of the market in the region. Furthermore, in 2030, the market in North America is evaluated to occupy the largest share in terms of revenue owing to the increasing burden of blood disorders in the region.  For instance, according to the World Health Organization, anemia which is a common blood disorder, affects more than three million Americans, particularly adolescent women. Additionally, the growth in the adoption of hematology analyzers by the diagnostic industry and growing technological advancements in diagnostic instruments in the region are expected to fuel market growth in the future. 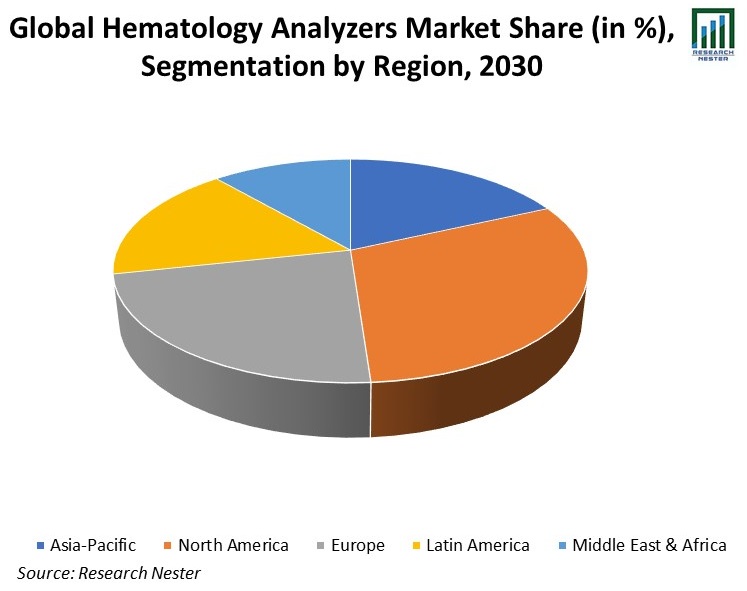 The global hematology analyzers market is further classified on the basis of region as follows:

Our in-depth analysis of the global hematology analyzers market includes the following segments:

What are the major factors driving the growth of the hematology analyzers market?

The growth in blood donations and increasing technological advancements in hematology analyzers are the key factors driving market growth.

What would be the CAGR of hematology analyzers market over the forecast period?

The market is anticipated to attain a moderate CAGR over the forecast period, i.e., 2022-2030

What are the challenges affecting the hematology analyzers market growth?

Stringent regulatory policies for hematology analyzers and high cost of the product are estimated to hamper market growth.

Which region will provide more business opportunities for growth of hematology analyzers market in future?

The market in Asia Pacific region will provide ample growth opportunities owing to the increasing population, rising investments in healthcare facilities and infrastructure in the region.

Who are the major players dominating the hematology analyzers market?

What are the segments in the hematology analyzers market?

The market is segmented by product type, end-users and region.

Which segment under the end-users segment captures the largest market size in the hematology analyzers market?