The global grid scale stationary battery storage market is estimated to garner a hefty amount of revenue by recording a CAGR of ~15% over the forecast period, i.e., 2022 – 2030. The growth of the market can be attributed to the growing investments towards sustainable energy resources, increasing government consciousness to curb carbon emissions, and surge in demand for grid stability and electricity supply concerns. According to the c2es organization, carbon dioxide accounts for about 76 percent of total greenhouse emissions, and burning fossil fuels for electricity, heat and transportation are the biggest contributors. Along with these, rising efforts to provide uninterrupted electricity supply during power outages, and improvements in the performance characteristics of lithium-ion batteries are expected to drive market growth in the upcoming years. Furthermore, ongoing clean energy systems integration including wind and solar, for synchronization of different networks, is projected to offer ample growth opportunities to the market in the near future. 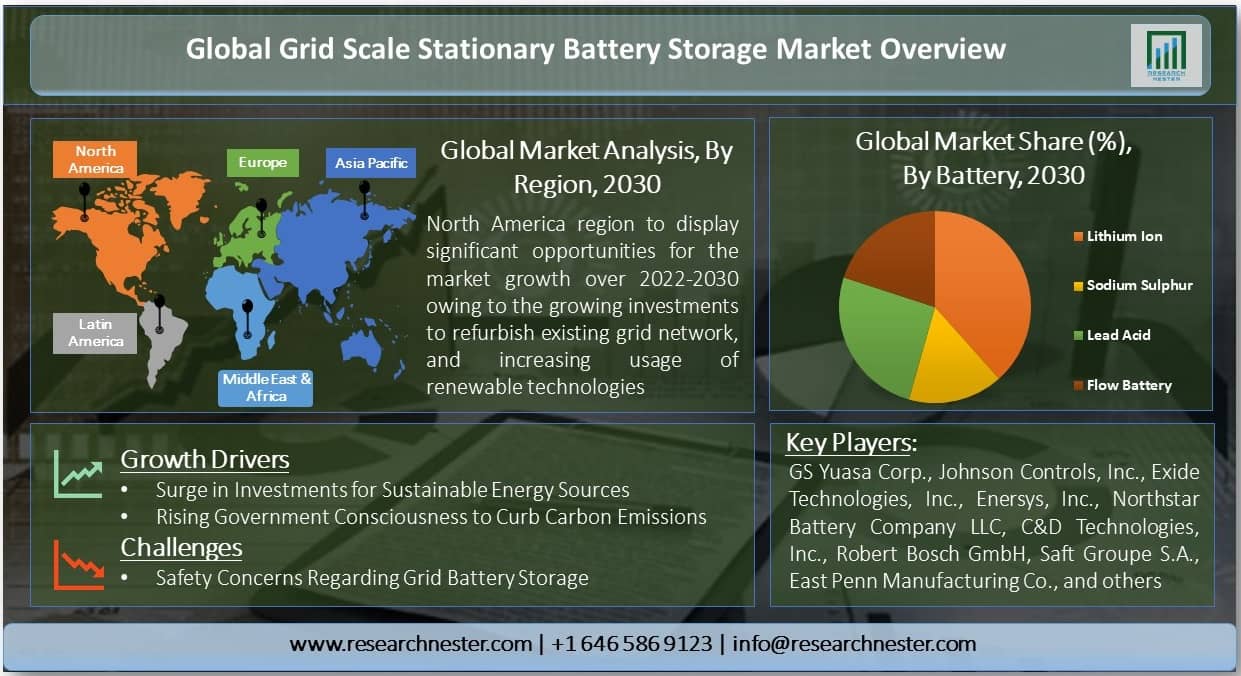 The market is segmented by battery into lithium ion, sodium sulphur, lead acid, and flow battery, out of which, the lithium ion segment is anticipated to hold the largest share in the global grid scale stationary battery storage market on account of the enhanced life cycle when compared to its lead acid counterpart and reduction in its cost. In addition, high energy density of these batteries and increase in installation of lithium ion based stationary battery storage systems are also predicted to boost the growth of the market segment in the future. Moreover, on the basis of grid services, the frequency regulation segment is predicted to grab the largest share during the forecast period owing to the high effectiveness of these services in synchronizing power generation resources for grid operation. CLICK TO DOWNLOAD SAMPLE REPORT

On the basis of geographical analysis, the global grid scale stationary battery storage market is segmented into five major regions including North America, Europe, Asia Pacific, Latin America and the Middle East & Africa region. The market in the North America is estimated to witness noteworthy growth over the forecast period on the back of the increasing investments associated with the refurbishment of existing grid network and rising usage of renewable technologies in the region. Apart from these, positive industrial sector growth is also expected to drive the region’s market growth in the coming years. Additionally, the market in Asia Pacific is predicted to acquire the largest share during the forecast period ascribing to the rapid rate of industrialization and urbanization, high manufacturing output of countries such as China and India, and rise in development of new products in the region. For instance, in 2017, the share of urban population in China was approximately 59 percent, which increased up to about 64 percent by the end of the year 2020.

The global grid scale stationary battery storage market is further classified on the basis of region as follows:

What are the major factors driving the growth of the grid scale stationary battery storage market?

The major growth drivers for the market are rising demand for industrial battery from data centers and telecom industry and increasing renewable energy integration around the world.

What would be the CAGR of grid scale stationary battery storage market over the forecast period?

What are the challenges affecting the grid scale stationary battery storage market growth?

North America will provide more business opportunities for market growth owing to the increasing investments associated with the refurbishment of existing grid network and rising usage of renewable technologies in the region.

Who are the major players dominating the grid scale stationary battery storage market?

What are the segments in the grid scale stationary battery storage market?

The market is segmented by battery, grid services, and others.

Which segment captures the largest market size in the battery segment in the grid scale stationary battery storage market?

The lithium ion segment is anticipated to hold largest market size and is estimated to grow at a notable CAGR over the forecast period and display significant growth opportunities.