According to the statistics by the Avert Organization, in the year 2018, an estimated 37.9 million of the world’s population were living with HIV. These population size also included 1.7 million children.

The growth of the global HIV self-testing market is thriving on the back of growing prevalence of HIV across the world, which continues to be a burden for nations around the globe, and has created an upsurge in the requirement of advanced testing and diagnosis methods. Additionally, growing opportunities observed in making HIV kits available in several nations where there are no policies for HIVST. Moreover, with the increasing public sector funding and collaborations is helping to scale up the adoption of HIV kits in several developed and developing countries across the globe. The global HIV self-testing market is also anticipated to grow rapidly on the back of increasing penetration of online channel for the distribution of these medical products which doesn’t require local government approvals and is therefore finding massive response from the low- and middle-income nations.

The global HIV self-testing market is segmented by regions into North America, Latin America, Europe, Asia-Pacific and Middle East and Africa. The HIV self-testing market in South East Asia was valued at USD 2.21 million in the year 2018 and is anticipated to attain a CAGR of 50.74% during the forecast period. The growth of the market in the region can be attributed to the presence of nations, such as Thailand and Cambodia, which are recorded to be the centers of the HIV epidemic. According to the Global AIDS Epidemic report by the UNAIDS and World Health Organization (WHO), around 0.3% of the adults in South East Asia are infected with HIV. Moreover, the HIV self-testing market in Latin America is anticipated to reach a value of USD 51.24 million in the year 2025 owing to the presence of nations, such as Brazil, which has the highest prevalence of HIV. Additionally, availability of advanced treatment facilities for HIV in the nation is also anticipated to foster the growth of HIV self-testing in the region.

The global HIV self-testing market has been segmented on the basis of sample into blood, oral fluid and urine. Blood segment with 47.12% share in the year 2018, occupies the largest market of HIV self-testing across the globe. The HIV tests are usually conducted using the blood samples and these types of test often deliver accurate results. Although, the results of the tests may be invalid at times owing to incorrect use of buffer, insufficient specimen and others, but among all the other samples used for HIV self-testing, blood is considered to provide the most accurate results. Additionally, the blood segment is anticipated to cross USD 480.10 million by the end of 2025 and is anticipated to flourish at a CAGR of 45.18% over the forecast period. 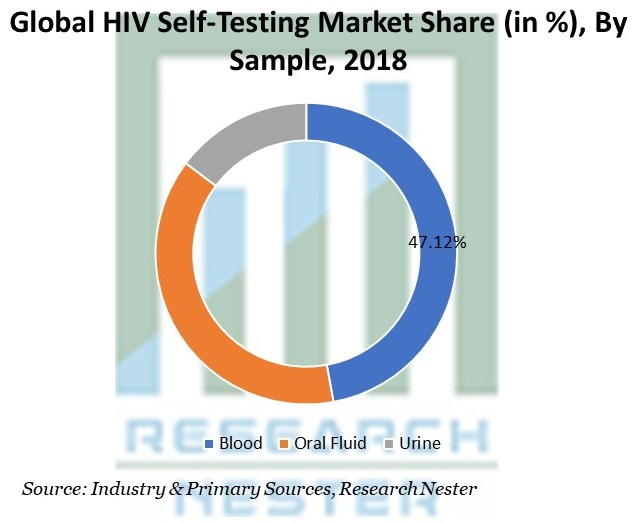 According to the Global AIDS Epidemic report by the UNAIDS and World Health Organization (WHO), around 1.7 million people have been affected newly by HIV in the year 2018 and that nearly 770,000 people have died of AIDS.

What are the major factors driving the growth of the HIV Self-Testing market?

Increasing adoption of HIV self-testing kits, growing prevalence of HIV, opportunities observed in making HIV kits available in several nations where there are no policies for HIVST are some of the factors that are driving the growth of the market.

What would be the CAGR of HIV Self-Testing Market over the forecast period?

Which region will provide more business opportunities for growth of HIV Self-Testing market in future?

The market in South East Asia, which was valued at USD 2.21 million in the year 2018 is anticipated to provide more business opportunities for the growth of the market in the future.

Who are the major players dominating in the HIV Self-Testing market?

6. What are the major segments in the global HIV self-testing market?

The market is majorly segmented by sample, product technology, test generation and by region.

7. What can be the significant growth opportunity for the sample segment in the global HIV self-testing market?

The blood segment, which is a sub-segment of the sample segment, is anticipated to hold the largest market share of 47.12% in the year 2018 owing to the high accuracy rate of the testing method.

8. What are the restraining factors for the market?

Low awareness among people for HIV self-testing, low availability of the product in pharmacies of low- and middle-income countries are some of the major factors anticipated to act as a barrier towards the growth of the global HIV self-testing market.