Extensive insights into the Growth of Bromine Market amidst COVID-19

Bromine is a natural element, found in lakes, sea and underground bores and mines. It is generally used in biocides, water treatment plants and pharmaceutical industries owing to its property of catalyst and reactant. Bromine and its derivatives have wide-scale application in several industries such as oil and gas industry. Brine fluids; derivative of bromine is widely used in oil and gas drilling industries owing to its characteristic of high density liquid which provides protection and efficient process underground such as underground boring.

The global bromine market is predicted to flourish significantly at a CAGR of 11.7% over the forecast period i.e. 2016-2023. Moreover, the market of bromine market accounted for USD 4.52 Billion in 2015 and the market is anticipated to reach USD 10.21 Billion by 2023. The bromine market of Asia-Pacific is estimated to grow significantly over the forecast period owing to presence of emerging economies such as India, China, and others. Moreover, the market accounted for the largest revenue share of 30% in 2015 in overall bromine market across the globe. On the other hand, Europe is expected to be the second largest share contributor by registering a share of 27% in 2015 in overall market of bromine across the globe due to presence of large number of pharmaceutical industries and extensive researches for effective drugs. 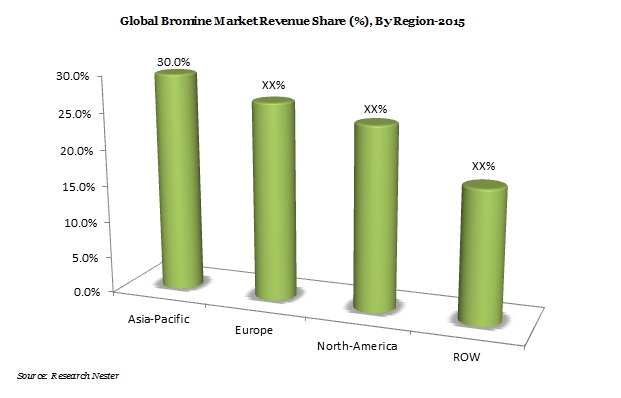 In 2015, North America accounted the revenue share of 25% in overall bromine market across the globe. The market is expected to grow owing to technological advancements in automobile sector which is further expected to fuel the demand for bromine. Wide-scale application of bromine in oil refractories, gas extracting industry and pharmaceutical industries is making it the most required element in the growth phase of industries across the globe. Rapid extraction of oil and gas in order to meet the demand of consumers, growing population and technological advancements in sectors require fuel in large quantities are some of the major factors paving the growth of bromine market. CLICK TO DOWNLOAD FREE SAMPLE REPORT

Our in-depth analysis segmented the global bromine market in the following segments:

Global Bromine market is further classified on the basis of region as follows:

Increasing investments in oil and gas extraction industries, rapid production of bromine across the globe; rising export and import of elements such as bromine owing to miscellaneous applications in agriculture and water-treatment set-ups, and rise of funding in agriculture sector and water-treatment industry in order to provide better daily need resources to consumers are some of the major key factors further trigger the demand for bromine in near future. In addition to this, factors such as introduction of effective flame retardants, technological advancements in bromine derivatives, researches in pharmaceutical industries to develop effective drugs for treatment, rising initiative towards polymer fabrication are expected to spur the demand for bromine over the forecast period i.e. 2016-2023.

Moreover, increasing demand of polymer fabrication and flame retardants in electronic and textile industries which is further estimated to trigger the bromine demand in respective industries is some of the vital factors anticipated the growth of bromine market. Rising globalization and increasing numbers of emerging economies across the globe, on the other hand, increasing investments in oil and gas refractories owing to rising demand of fuel, increasing concerns towards reuse and recycle of conventional resources such as water thus increase water treatment set-ups are factors expected to gain traction and rise the demand for bromine globally. Rapid growth in food and agriculture sector owing to government funding and availability of effective and low cost pesticides is further likely to bolster the demand for bromine in agriculture sector in order to increase economy by the nations.

However, high toxicity of brominated flame retardants, rising environmental concern towards water and soil and presence of strict regulatory for use of bromine are some of the factors likely to inhibit the growth of bromine market in near future.

The key vendors of Bromine market are as follows: