The global butyric acid derivatives market is estimated to garner a revenue of ~USD 1367.8 million by the end of 2033 by growing at a CAGR of ~6.7% over the forecast period, i.e., 2023 – 2033. Further, the market generated revenue of ~USD 669.9 million in the year 2022. The growth of the market can be attributed primarily to the rising consumption of meat and poultry around the world. It was observed that over the past 30 years, the production of meat has doubled. Global meat consumption is expected to reach about 450 million to 580 million tons by 2050. 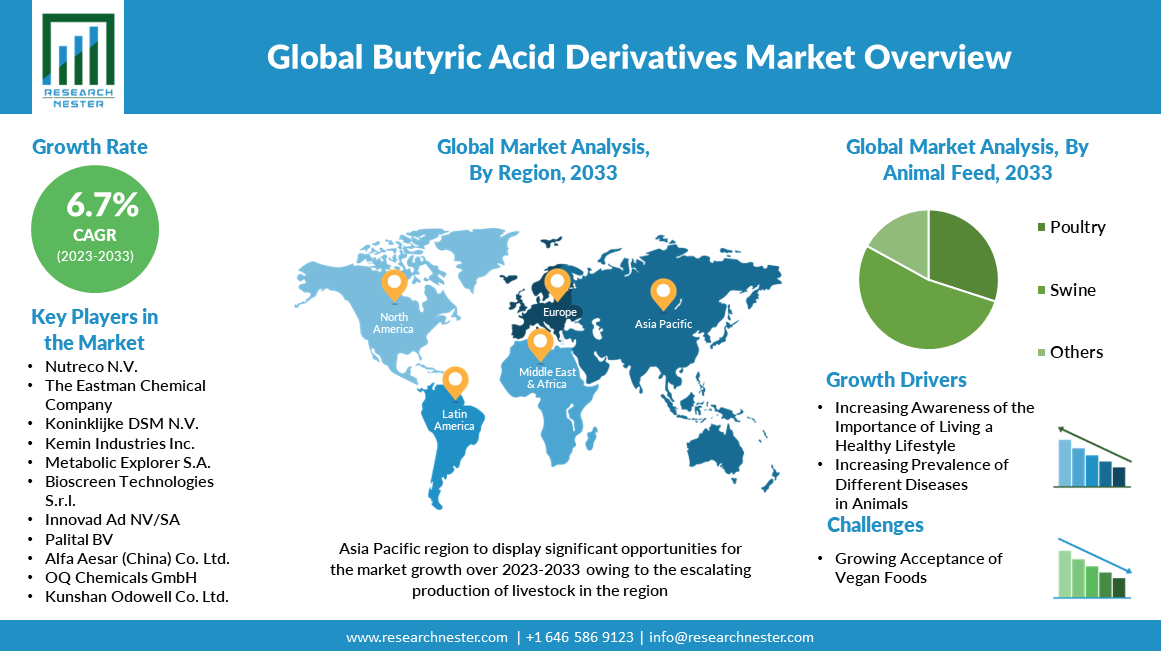 Butyric acid is an alkyl carboxylic acid with a straight chain. There is extensive use of butyric acid derivatives in animal feed as additives and are used to reduce animal-derived products' strong meat odors. These ingredients help meet the health requirements of animals. It helps in improving health, provides a proper diet, and supports gut health and animal productivity. In addition, the increasing demand for meat-based products and understanding of the benefits of protein found in animal meat is expected to enlarge the global butyric acid derivatives market size during the forecast period. For instance, it has been 50 years since world meat consumption tripled, and meat production has grown more than threefold. Every year, more than 300 million tonnes of meat are produced around the world.

The global butyric acid derivatives market is segmented and analyzed for demand and supply by animal feed into poultry, swine, and others (goats and sheep). Among these segments, the swine segment holds the largest market share of 53% in 2022. In recent years, pork and poultry consumption has greatly impacted the demand for pig feed and pig breeding. Worldwide shipments of butyric acid derivatives for swine animal feed are expected to augment the segment growth during the forecast period. For instance, the consumption of pork in China is expected to rise at a rate of around 6.5 kg per capita by 2024 and to increase at a rate more than three times higher than that of poultry, 2.6 kg per capita.

Regionally, the global butyric acid derivatives market is studied into five major regions including North America, Europe, Asia Pacific, Latin America and Middle East & Africa region. The market in the Asia pacific region was estimated to generate 53% of the revenue in 2022 backed by the increasing production of livestock in developing countries such as China, India, Japan, and Korea. It was observed that a significant increase in monogastric livestock, 63 to 75% of total livestock units (LUs), caused the number of livestock units (LUs) in China to triple within 30 years. Moreover, the rising per capita income, growing population, high consumption of poultry products, growing animal husbandry activities and rising awareness towards adoption of healthy lifestyle are factors expected to drive global butyric acid derivatives market in the region during the forecast period. 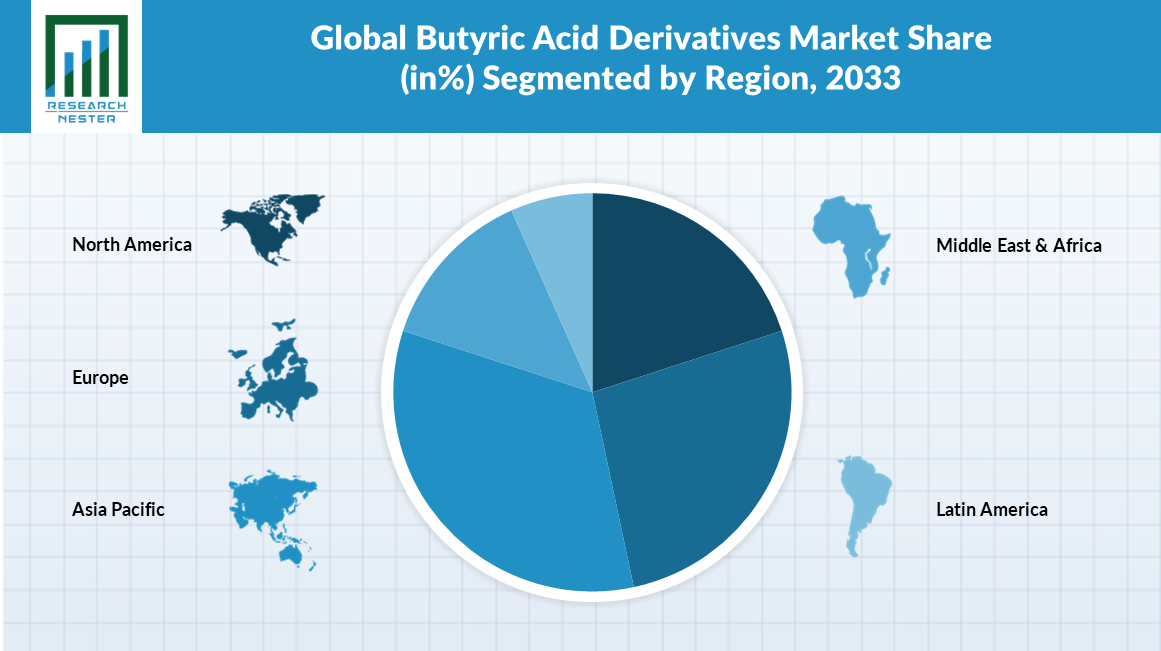 The global butyric acid derivatives market is further classified on the basis of region as follows:

What are the major factors driving the growth of the butyric acid derivatives market?

Increasing awareness towards the adoption of healthy lifestyle along with rising consumption of meat around the world are the major factors driving the growth of the butyric acid derivatives market.

What would be the CAGR of butyric acid derivatives market over the forecast period?

What are the challenges affecting the butyric acid derivatives market growth?

Growing acceptance of vegan foods and increasing market for plant based products are the challenges affecting the market growth.

Which region will provide more business opportunities for growth of butyric acid derivatives market in future?

The market in Asia Pacific, with currently the highest market share of 53% is projected to keep holding the largest market share by the end of 2033 and provide more business opportunities.

Who are the major players dominating the butyric acid derivatives market?

What are the segments in the butyric acid derivatives market?

The market is segmented by animal feed, by product, and by region.

The swine segment, with a market share of 53% is anticipated to keep holding the largest market size by the end of 2033 and display significant growth opportunities.